There were two interesting developments in the world economy last week that some have called a sea change. First, the US Federal Reserve bank ended its programme of what is called ‘quantitative easing’ (QE). This is the purchase by the central banks of government, corporate and real estate bonds paid for by ‘printing money’, or more precisely creating reserves of money in banks.

This ‘unconventional’ monetary stimulus was adopted by the Fed and other banks after they had cut their interest rates for lending to commercial banks (the ‘policy rate’) to zero and the major economies were still struggling to get out of the Great Recession. The argument was that once interest rates were ‘zero-bound’, further stimulus to the economy would have to be ‘quantitative’, based on more money quantity rather than just being cheaper to borrow (lower interest rate).

Well, at its meeting last week, the Fed announced that its QE programme had finally ended and there would be no more further purchases of bonds paid for by printing money. Just a couple of days later, the Bank of Japan announced the opposite in a surprise move (the vote to do so was just 5-4). The BoJ is going to expand its current QE programme by increasing the annual rate of purchases of government bonds and other private sector bonds.

Why the different policies? Well, the Fed thinks that the US economy and, in particular, its labour market, is recovering sufficiently to manage on its own and any further stimulus might even be inflationary. On the other hand, the Japanese economy is still on its knees and may even slip back into recession (see my post,
https://thenextrecession.wordpress.com/2014/10/13/japan-the-failure-of-abenomics/).
So the BoJ is trying to get the economy out of its mire with an extra injection of QE in 2015.

But has QE worked and will it work in getting capitalist economies back to levels of real growth achieved before the Great Recession hit in 2008? The answer is clear: no.

Since the end of the Great Recession in mid-2009 and the use of QE since 2010 by various central banks, the Fed, the BoE, the BoJ and to some extent, the ECB, global growth has remained weak and below trend and the recovery in employment and investment has been poor.

In Japan and the Eurozone, recession and deflation (not inflation) are spectres haunting their economies. Indeed, there is talk currently in mainstream economics of ‘secular stagnation’ taking over in the major economies (see my post, https://thenextrecession.wordpress.com/2013/11/30/secular-stagnation-or-permanent-bubbles/) and the major economies will never ‘return to normal’ (see my post, https://thenextrecession.wordpress.com/2014/08/14/the-myth-of-the-return-to-normal/).

Now the argument against this might be that, at least in the US and the UK, where QE has been employed the most, there has been an economic recovery. Well, I have discussed the frail and imbalanced nature on the UK economic recovery in various posts (see https://thenextrecession.wordpress.com/2014/10/18/uk-the-agony-and-the-ecstasy/). And if we consider the US, average real GDP growth since the end of the Great Recession has been only about half the rate than before (graphs from Doug Short’s site). 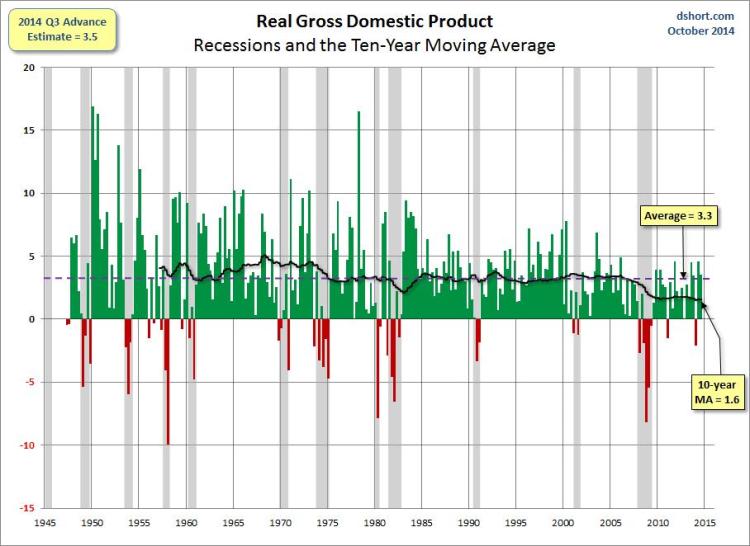 The gap between where US real GDP per head should have been (red line in graph) and where it is now after the Great Recession (blue line) is widening, not narrowing.

In Q3, year-on-year growth was still more or less where it has been for years, at 2.3%.  And it seems that in Q3, growth was supported mainly by more government spending and better trade figures. US domestic private sector growth actually slowed.  The contribution to the growth figure from private consumption fell from 1.75% pts to 1.22% pts, or from 38% of total growth in Q2 to 35% in Q3. The contribution from business investment fell from 1.45% pts to 0.74% pts, or from 32% of total growth to just 21%. What kept growth going was extra defence spending, where the contribution to growth nearly tripled; and a huge rise in the contribution of trade overseas, as oil imports plummeted in both price and volume, and so provided a boost to domestic gross product.

Most important, business investment (as a share of GDP) has still not returned to levels seen before the Great Recession after six years.  US businesses have used the sharp recovery in the mass of profit from the end of 2008 mainly to hoard cash abroad, or to pay larger dividends to shareholders or buy up their own shares to boost the market value of the company. Investment in new technology or plants to employ people has come last. And now there are just some signs that corporate profits may have peaked and, as profits lead investment, investment growth could slow sharply or even reverse next year (see my post, https://thenextrecession.wordpress.com/2014/08/29/the-us-recovery-the-long-depression-and-pax-americana/).

So what has been the effect of QE? Well, the theorists of the quantity theory of money, the 20th century exponent of which was the right-wing economist Milton Friedman, argue that by a judicious control of the right amount of money in the economy by a central bank, an economy can be kept on an even keel and grow steadily (as long as, of course, governments and trade unions don’t interfere with markets).

Former Fed Chair Ben Bernanke has been a lifetime supporter of Friedman’s monetarist solution. In a speech in 2012, Bernanke reiterated his longstanding claim that “purchases of longer-term securities by the Federal Reserve during the Great Depression could have helped the U.S. economy recover despite the fact that short-term rates were close to zero”. Bernanke reminded us that “Friedman argued for large-scale purchases of long-term bonds by the Bank of Japan to help overcome Japan’s deflationary trap.” (see my post,
https://thenextrecession.wordpress.com/2012/09/03/bernanke-in-a-hole/).

The famous monetarist formula is MV=PT, where M is the total money in circulation, V is the velocity or rate of turnover of that money (changing hands) and P is the level of prices in an economy and T is the level of transactions (activity or sales) in an economy. The monetarist argument is that an injection of more M (with V steady) will either raise prices (inflation) or boost the real economy (transactions).

Well, there certainly has been a huge injection of M. In the US, the Fed has increase the monetary base from 3% of GDP to 15% and the BoJ has raised it to over 30%. 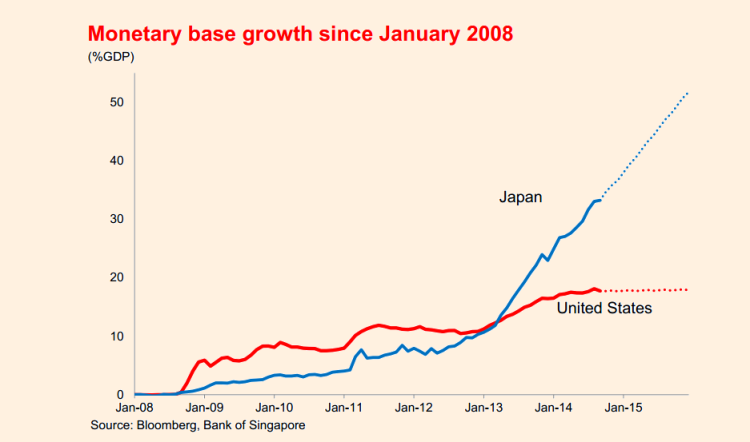 During the Great Recession, the money multiplier plummeted as the economy shrank and the quantity of money out there fell accordingly. But the injection of more money by the Fed has done nothing to reverse that since the end of the slump. To use the famous phrase, the Fed has been pushing on string and the other end of the string (the wider economy) has not moved.

The quantity theory of money and its policy instrument, QE, has been shown to be unrealistic and a failure. In the monetarist formula, M has been increased hugely but P (prices) has hardly moved up and T (transactions) has also stagnated. What has happened is that V (velocity or the turnover) of money has dropped accordingly.

The reason is because the quantity theory is back to front (see my post,
https://thenextrecession.wordpress.com/2012/04/21/paul-krugman-steve-keen-and-the-mysticism-of-keynesian-economics/).
An endogenous theory of money (of which Marx was an early exponent) would start the other way round: it’s demand for credit or money that drives the supply of money, not supply creating demand. And the demand for money has been weak because economic activity is weak. To use another cliché: you can bring a horse to water, but you cannot make it drink.

QE has not worked in raising rates of economic growth back to pre-crisis levels. So where has all the money gone? It has gone into the banking system to shore up their balance sheets and restore their profits. And it has engendered a massive bubble in financial assets; and the prices of government and corporate bonds and most of all, stock prices, have rallied over 73 months to record highs.

As I write, the US stock index has hit a new high (after the short ‘correction’ in early October – see my post,
https://thenextrecession.wordpress.com/2014/10/17/october-is-a-volatile-month/).
Despite the end of QE by the Fed, the decision of the BoJ to expand QE and the possibility that the ECB will soon follow has fuelled another leg up in the stock markets.

A Keynesian economist, Robert Farmer, wrote some books a few years ago, arguing that the best way to kick-start the economy was for the Fed to buy stocks and shares directly as part of a QE programme. Farmer reckoned this would restore ‘animal spirits’ and business ‘confidence’ and get businesses to invest more (see my post,
https://thenextrecession.wordpress.com/2010/06/02/the-keynesian-answer-support-the-speculators/). Well, the experience of the last few years has refuted that idea. The real economies of world remain in the doldrums while stock markets reach rocket highs. The only beneficiaries are the top 1% everywhere, who own the bulk of financial assets, rather than homes, like the middle classes.

The latest BoJ expansion, contrary to the expressed views of the mainstream economists (Bernanke, Krugman etc), won’t get Japan out of its stagnation (see my post, https://thenextrecession.wordpress.com/2013/02/14/japans-lost-decades-unpacked-and-repacked/). The US and the UK appear to gaining some traction, but if profits stop rising next year, that could turn round. And the rest of the major economies globally have been slowing down significantly. Forecasts for global growth next year have been consistently lowered by the major international agencies (see my posts,
https://thenextrecession.wordpress.com/2014/07/08/slowing-global-growth-and-the-capitalist-future/).
That means continued unemployment for millions and stagnant real incomes in many major economies.

And the risk is that if the Fed has now ended its QE programme and does implement a hike in interest rates in 2015, then the financial boom will also collapse and profits will begin to fall, increasing the risk of a new slump (see my post, https://thenextrecession.wordpress.com/2014/08/01/the-risk-of-another-1937/).

10 thoughts on “The story of QE and the recovery”