The talk over the weekend at the IMF-World Bank meeting in Washington was of the global economic slowdown as both international agencies reduced their forecasts for real GDP growth in 2015, yet again. In particular, the IMF warned of a serious risk of a renewed recession in the Eurozone (see my post, https://thenextrecession.wordpress.com/2014/10/10/draghis-answer-to-euro-depression/). The IMF reported that there is a 40% probability of a recession in the euro area within 12 months, along with a 30% chance of outright deflation. This caused a sell-off in financial markets.

However, Gavyn Davies, ex-chief economist at the giant vampire squid, Goldman Sachs, but now a columnist for the FT, dismissed the fear that a new recession in the Eurozone would cause a global slump (http://blogs.ft.com/gavyndavies/2014/10/12/its-the-new-mediocre-not-a-global-recession/). He pointed out that the US economy was still growing relatively strongly and that the recent fall in oil prices would actually help to boost consumer spending by as much 1% of GDP if it holds.  He reckoned that a slump in the Eurozone would only lower global economic growth by about 1% next year. So there would be no global slump. 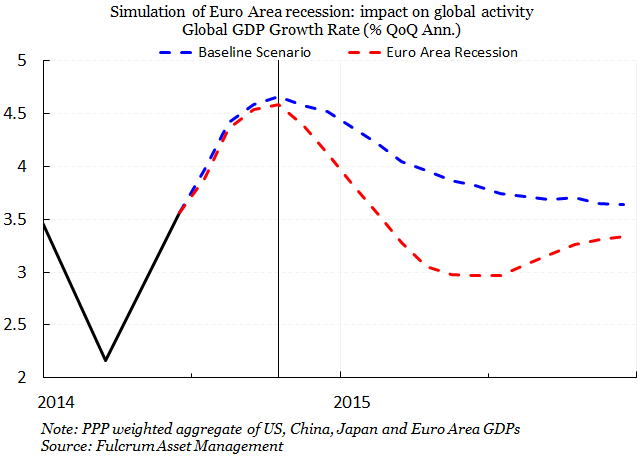 Well, 1% point off a global growth rate optimistically forecast at a relatively poor 3.8% in 2015 would be pretty damaging, it seems to me.  And data from 19 large emerging economies collated by research firm Capital Economics show that industrial output in August and consumer spending in the second quarter fell to their lowest levels since 2009. Export growth in August also plunged.  The Capital Economics’ model, which makes projections for overall EM GDP growth based on published official and private data, shows an aggregate growth rate of 4.3% in July, down from 4.5% in June and preliminary numbers for August suggest a further slowdown.

And there is another factor. Davies and others seem to have failed to notice that the third-largest national economy in the world, Japan, is also in deep trouble.

Some Japanese analysts have noticed. “People should seriously consider that Japan’s economy may have fallen into recession despite the weaker yen and a stock rally from the BOJ’s easing and the flexible fiscal policy by Abe’s administration,” said Maiko Noguchi, senior economist at Daiwa Securities. “Initial expectations that the economy could withstand the negative effects of a sales tax hike through a virtuous circle seem to be collapsing.” And Yuji Shimanaka, chief economist at Mitsubishi UFJ Morgan Stanley Securities, also commented “the risks are rising that the economy will later be determined to be in recession.”

The economy fell between April and June by an annualised 7.1% and even though the rate of decline will have been much slower from July to September, all the indications seem to point towards the possibility that growth was negative, which would mean that at least technically Japan is back in recession.

Industrial output was down 1.5% between July and August (and down 2.9% over August 2013) and has fallen in three of the past five months. Household spending was down 4.7% year on year in August, and the coincident composite index, which consists of 11 key indicators, including retail sales and industrial production, fell 1.4 points to 108.5, the first fall since June.

And just as in the Eurozone, inflation is dropping fast towards deflation again. The hiking of the sales tax last April as part of the government’s attempt to control rising debt and huge budget deficits drove up headline inflation to over 3% a year, but if you strip out the effects of that tax, then inflation rose only 1.3% and the Tokyo University frequently purchased items index (obtained from supermarket scanner data) shows underlying inflation continuing to slow.

The tax hike has really hit living standards in Japan. Average real wages are falling (as they are in the UK, the Eurozone and even the US). 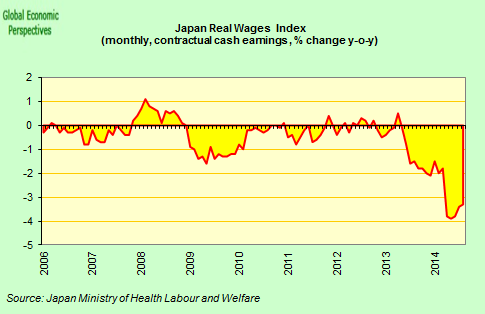 In an obscure report, Goldman Sachs found that “while employment improved in all income brackets, overall livelihood and income growth have worsened in some brackets, particularly in the under ¥3 mn low-income bracket. A noteworthy point is that this began to worsen from early autumn 2013, not after the consumption tax hike in April 2014.”

All this exposes the sham of so-called Abenomics and support for the government’s policies that has come from various Keynesian economists. As long ago as February 2013, (https://thenextrecession.wordpress.com/2013/02/14/japans-lost-decades-unpacked-and-repacked/), I discussed the great experiment of the Abe government in trying to restore economic growth by applying all Keynesian remedies at once – monetary and fiscal stimulus along with a very sharp depreciation of the currency against its major trading rivals.

Back then Paul Krugman and Dean Baker reckoned that the Japanese ‘experiment’ must be supported as it is going to prove that Keynesian-style policies of monetary injections and fiscal stimulus will work. I argued that Keynesian policies in the 1990s did not work for Japan and they probably won’t work in this decade either. I posed the question: “will I be proved wrong?” And I answered : “I doubt it.”

Well, the Japanese economy has not recovered and appears to slipping back into recession. The government’s targets of boosting inflation to over 2% a year, reducing the fiscal deficit and raising productivity are further away than ever.

Of course, as I said two years ago, the real purpose of Abenomics was to raise the profitability of Japanese capitalism, at the expense of labour (https://thenextrecession.wordpress.com/2014/07/30/abenomics-raises-profitability-and-misery/). Japan’s citizens have paid the price of higher taxation and inflation and a slowdown in employment growth. And that is helping to get profitability back up, as the data from the AMECO database on Japan’s net return to capital suggest. 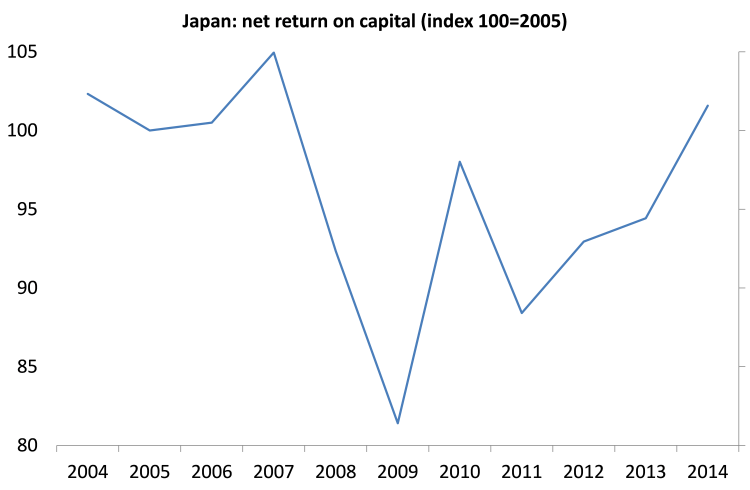 Profitability appears to have recovered somewhat although the level is still below the peak in 2007. But this still has not led to a significant rise in business investment that could really get the economy going.

And PM Abe is supposed to hiking the sales tax again next April. A decision on that is due in December. If both the Eurozone and Japan are in a slump in 2015, that does not bode well for the world economy.

4 thoughts on “Japan: the failure of Abenomics”