That’s why the newly elected right-wing government launched its great experiment in applying all Keynesian remedies at once – monetary and fiscal stimulus along with a very sharp depreciation of the currency against its major trading rivals.  The fast devaluation of the yen has provoked objections from other major capitalist countries.  The G7 meeting let it be leaked that it was not amused and considered that Japan was taking advantage.  And last week, French president Francois Hollande also complained and showed concern about the relative appreciation of the euro hitting French export growth.  So the Keynesian experiment in Japan is already causing worries elsewhere.  But, more important, will the experiment work?

Noah Smith had a new post last week (http://noahpinionblog.blogspot.co.uk/2013/02/the-koizumi-years-macroeconomic-puzzle.html) in which he asked the question: what caused Japan’s growth speed-up from 2000-07? There is a good reason, at least for Smith, why he wants to know.  That’s because the economic performance of Japan is a mystery to him and does not seem to fit any Keynesian explanations.  You see, as Smith points out, during that period, Japan remained in a Keynesian ‘liquidity trap’ with interest rates near zero, while prices were deflating.  According to Keynesian theory, Japan should have been in another decade of depression.  But it was not really. 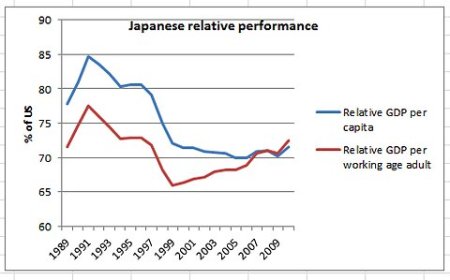 Instead, Japan picked up its growth rate in the 2000s compared to the ‘lost decade’ of the 1990s.   Indeed, it partially reversed the decline in GDP per capita relative to the US that it experienced in the 1990s.  This improvement has been highlighted also by Paul Krugman in his blog (http://krugman.blogs.nytimes.com/2013/02/09/japanese-relative-performance/).  Smith trawled through the possible explanations of this relative recovery which took place during the so-called Koizumi era (‘neo-liberal’ regime of pro-capitalist Japanese PM, Jinichori Koizumi), again hardly fitting in with Keynesian policies. 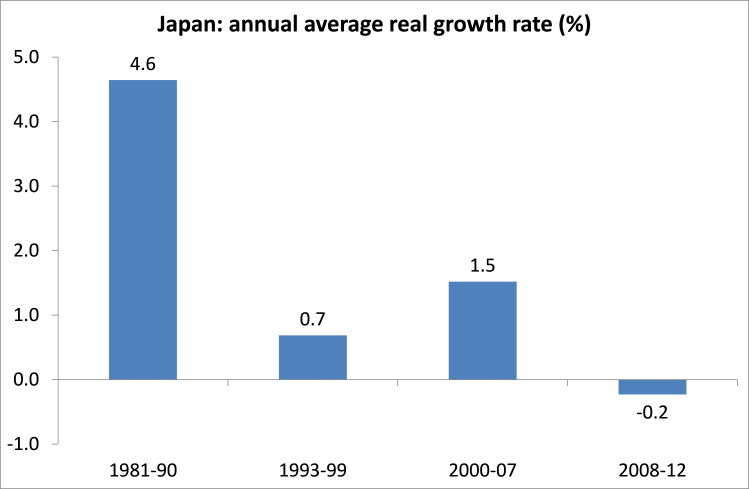 Smith notes that Japan continued to be in a Keynesian-style liquidity trap and in deflation throughout the 2000s.  Also, the relative recovery cannot be explained by Keynesian-style fiscal stimulus, because government spending fell in both absolute terms and as a percentage of GDP , while budget deficits as a share of GDP also narrowed.  As I have shown before, in the 1990s, in contrast, there was considerable extra government spending and rising budget deficits, but these Keynesian prescriptions failed to revive the Japanese economy.  Then in the 2000s, there was fiscal austerity under Koizumi and yet economic growth was faster!  Of course, part of this paradox is that poor growth in the 1990s meant that the ratio of government spending and deficits to GDP rose, but remember even in absolute terms, government spending and deficits rose – to little effect it seems. 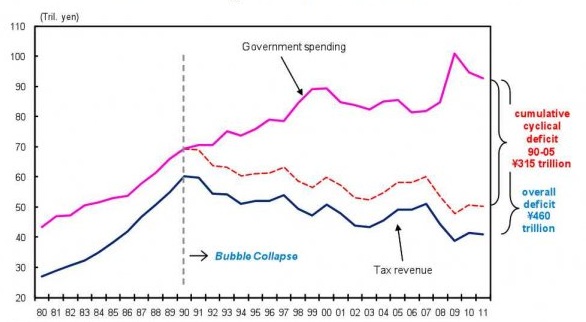 The contribution from net exports did not seem to contribute much either in the 2000s.  But Smith did note that bank lending ,which had collapsed in the 1990s when banks were deleveraging their debts from the bubble years, rose in the 2000s.  I reckon this is significant and a lesson for the current depression in the major economies.  But Smith is at a loss to explain this.

Indeed, he sums up his analysis of Japan in the 2000s as follows: “during the years of 2000-07, Japan grew quite quickly when measured properly (as GDP/working age population), substantially faster than the United States after accounting for demographics. However, during this entire time, it was stuck deep in a liquidity trap, with government spending decreasing and banks and companies deleveraging. Also, Japan did not experience a major improvement in its balance of trade, nor a large currency depreciation, nor an increase in inflation or inflation expectations. Additionally, Japanese services TFP remained flat.  And he concludes: “I regularly say things like “Japan confounds macroeconomic analysis.” Now you know what I mean…”

Well, I had a little think about this ‘mystery’ from a Marxist point of view.  If growth and investment picked up in the 2000s, then the main reason must be a recovery in profitability.  And that’s exactly what the data show, as I portrayed in a recent post (https://thenextrecession.wordpress.com/2012/12/16/japan-election-lowest-turnout-since-records-began/).  In that post, I explained how Japan’s rate of profit was held up during the 1980s by a massive credit and property boom.  But that could not last.  After the great credit bubble burst in 1989, the average rate of profit in the Japanese economy fell nearly 20% during the 1990s.  But from 1998 to 2007, it rose nearly 30%.  And we can analyse why, using Marxist categories.  The organic composition of capital (the value of plant, equipments and raw materials relative to the cost of labour employed) fell for the first time since the second world war, while the rate of exploitation of the labour force rose nearly 25%.  In other words, Japaneses devalaued its old assets, reduced the labour force and boosted profits per unit of labour.  This was the classic way out for capitalist production – at the expense of labour. 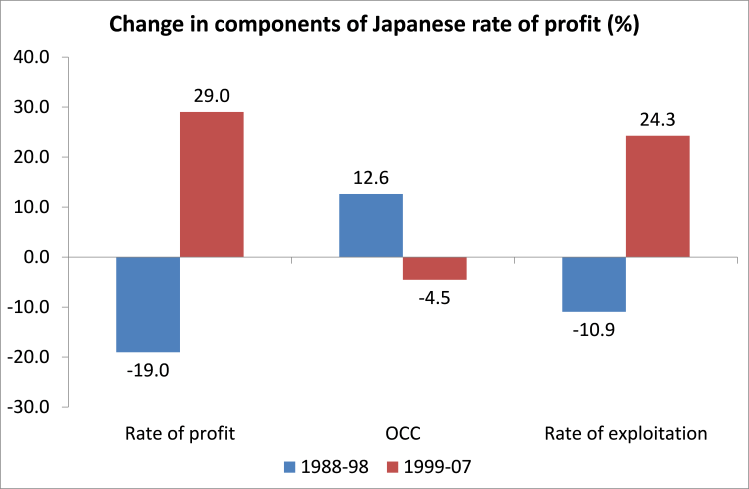 And Japanese capital also devalued and ‘deleveraged’ much of the debt (fictitious capital) that it had built up during the bubble decade of the 1980s, when non-financial corporate debt rose nearly 25% as a share of GDP  and household debt (financial and property) jumped by 37%.  During the 1990s, the corporate sector deleveraged by 15%, laying the basis for profitability to recover.

We can see in the graph below that Japanese corporations had much higher debt levels (relative to GDP) compared to German, British and American corporations.  But they began deleveraging that debt during the 1990s, with the bulk of that done by 2002. The opposite was happening in the other countries. 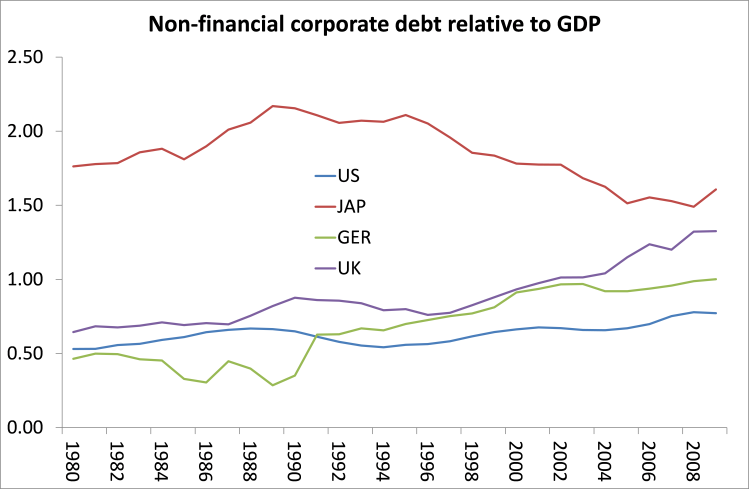 So I reckon the mystery of Japan’s economic recovery in the 2000s can be explained best in Marxist terms.  Average real GDP growth came back (relatively) because Japanese capital had written off old capital enough, both tangible and fictitious, and banks were in better shape to lend again – of course at the expense of a lost decade of income and jobs for its population in the 1990s, culminating in the dire deflationary slump of 1998.  The global slump of 2008-9 hit Japan hard, as much of its profitability and growth depend on world markets, as I showed in another post
(https://thenextrecession.wordpress.com/2013/02/06/japan-and-the-race-to-the-bottom/).

Why do we care what the reason was for Japan’s relative improvement in the 2000s?  Well, it shows up the weakness of mainstream economics as it does not know why the 2000s were better and, in contrast, it shows the explanatory power of the Marxist analysis.  It’s a mystery explained.  And it will have lessons for the current ‘experiment’ in Keynesian polices by the right-wing Japanese government.

And that lesson could be learned in this current decade.  Japan’s economic growth has been pretty much non-existent since the trough of the Great Recession and the current right-wing government is now throwing the kitchen sink of Keynesian policies at the problem.  But the experiment will probably not last beyond the end of this year.  Fiscal stimulus is supposed to end in 2014 when the sales tax is planned to increase to 8% and then 10% from October 2015 from the current 5%.  By then, yen devaluation will be over and “monetary policy will probably be the only thing left to support the economy next year,” as Masaaki Kanno, chief economist at JPMorgan says. “The moment of truth for the recovery will probably come in fiscal 2014.”

And this time, not only does Japanese capital still have large debts and lower profitability, it also has a declining population.  So the ability to generate more value and surplus value from the work force is limited by a contraction in labour supply.  That means capital must exploit the workforce even more intensively or invest more in more in costly new technology to try and raise relative surplus value to boost profitability.

Keynesian policies in the 1990s did not work for Japan and they probably won’t work in this decade either.  The 2010s will be the next ‘lost decade’.