Last Thursday, Mario Draghi, the current head of the European Central bank, soon to be replaced by Christine Lagarde from the IMF, announced a parting gift to banks and financial markets.  The ECB decided to reintroduce its bond purchasing programme in order to inject yet more billions into Europe’s banks in order to persuade them to lend onto industry and boost lagging growth.

This was the return of quantitative easing (QE) by the ECB.  But this time there was to be no time limit on the E20bn monthly of ECB purchases. It was to be forever – QE to infinity!  Also, the ECB would purchase not just the government bonds of debt-ridden Italy, Spain etc but also much riskier assets like corporate bonds.

Draghi also announced a new two-tier interest rate system for bank cash reserves held at the central bank.  These reserves have spiralled as banks took cash from ECB purchases of government bonds they held, but instead of lending that cash on in loans to the wider economy, the banks just put them back in the central bank as deposits. 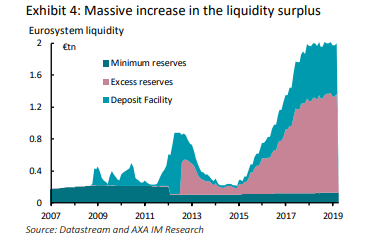 The ECB decided the the interest rate was to be held at zero for excess reserves, thus making sure that banks could not lose money if they were forced to offer negative rates to their borrowers. Banks can now also raise funds at negative rates and deposit these funds at the central bank up to six times the required reserve amount and get a zero rate, thus boosting profitability.

This two-tiered idea is seen by some mainstream monetary economists as revolutionary. In effect, the ECB is boosting bank profits with its own capital at risk.  Bank profits rise while the ECB buys government bonds at prices which offer negative rates and banks with large excess reserves’ can lend at a profit to those with low reserves.  But this ‘revolutionary’ policy is just about the last desperate measure of unconventional monetary policy. 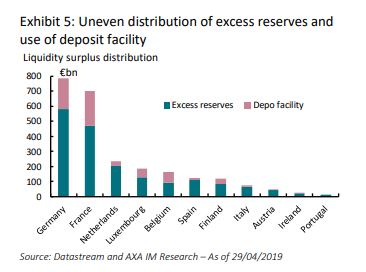 The monetarists are hopeful that boosting bank profitability will lead to an expansion of lending to business and households and get the Eurozone out of its renewing depression. This assumes that the problem is the banks not being prepared to lend because it is not profitable for them.  But is that the reason for low loan growth rates and investment?  It’s not the supply of money or bank profitability that is the problem, but the demand for loans.  Nobody wants to borrow to invest or spend even at zero or negative rates, because revenues and profits are stagnant, inflation and wage growth are low and, above all, export trade has collapsed.

You can take a horse to water (and you can make it a huge lake of water) but you cannot make it drink if it is not thirsty.  Even the central bankers, like Draghi, are admitting now that monetary policy has failed.  And even supporters of the revolutionary new policy are not confident: “Dual rates is monetary rocket-fuel. In contrast to standard negative rates, to forward guidance, or QE, the marginal effects of these policies are increasingly powerful. I am not convinced that this specific combination of measures will suffice to generate enough demand to create an acceleration in Eurozone activity – but it will help.” Eric Lonergan.

Draghi called for action by European governments, particularly those with ‘fiscal space’, eg Germany to run budget deficits and spend.  So far, Germany has been reluctant to do so.  But if it decides to up the ante fiscally, then we can test the Keynesian solution to capitalist recessions.  I’ll make a prediction: that won’t work either.