Mainstream economics has been seriously puzzled by the failure of the major economies to restore the previous growth rate in the productivity of labour since the end of the Great Recession.  There has been an intense debate over the issue.

Some argue that productivity growth has been restored but is just not being measured properly, now that much new productivity comes from data, intellectual ideas, software etc and not from the production of things.  But recent research has thrown cold water on this explanation.

Others argue that productivity growth may be lower, but that is simply the result of the aftermath of the Great Recession, leaving companies unwilling to invest in capital equipment and preferring to speculate in financial markets or just hold cash.  There is some truth in this argument, as I shall explain below.  After all, after a major slump, capitalist companies are going to hoard cash rather than possibly waste it on investment and extra production that may not find a buyer. And a past OECD study found support for what it called the ‘pro-cyclical’ element in post global crash productivity.  “Firms may respond to short-run fluctuations in demand by varying the rates at which their existing capital and labour are utilized, for example by hoarding labour at the time of a crisis waiting for the recovery or underutilising the existing capital stock without shedding it

Others reckon productivity growth had already slowed down before the Great Recession and would not recover because we are now in an era of low growth as all the hi-tech innovations have been exhausted and robots and AI will have little impact on the wider economy.  This view has been strongly contended by mainstream economist, Robert J Gordon, and by more radical observers. It suggests that capitalism may have passed its use-by date.  Again, this argument has some merit but, as I have explained in previous posts, it still does not identify the reason for the investment and productivity growth slowdowns since the end of the Great Recession.

Now some new research brings stronger light onto the debate.   The European Central Bank, the Bank of England and the OECD have recently produced reports that hone in one key feature of the ‘productivity puzzle’.  It seems that productivity growth is not stuttering everywhere in capitalist economies.  In the major economies, the so-called ‘frontier’ companies are increasing their productivity as fast as before the financial crisis.  The disappointing economy-wide productivity figures are to be blamed on the companies that are ‘behind the frontier’.

The OECD finds that the ‘diffusion’ of innovation and productivity growth from leading to lagging companies has slowed down.  The ECB also finds the same thing in its study of Eurozone productivity (where it is worse for services than for manufacturing) and the Bank of England finds the same for the UK and that its effect is substantial.  What is most significant is that the new OECD study found that the cause was the large number of ‘zombie’ companies (companies whose regular revenues at most cover their interest expenses (if that) — companies that, to paraphrase BoE governor Carney, “depend on the kindness of their creditors”.

The OECD researchers find that such zombies take up a frighteningly large part of the economy. Across the nine European countries they studied, the share of the total private capital stock ‘sunk’ in zombie companies ranges from 5 to 20 per cent. The suggestion is that such businesses hog capital and crowd the market for newcomers, make it harder for more promising companies to expand and hold back the reallocation of labour and capital to more productive and faster-growing companies.   The paper concludes that “the prevalence of, and resources sunk in, zombie firms have risen since the mid-2000s, which is significant given that recessions typically provide opportunities for restructuring and productivity-enhancing allocation” and that “a higher share of industry capital sunk in zombie firms tends to crowd out the growth—measured in terms of investment and employment—of the typical non-zombie firm.” All in all “a 3.5% rise in the share of zombie firms—roughly equivalent to that observed between 2005 and 2013 on average across the nine OECD countries in the sample—is associated with a 1.2% decline in the level of labour productivity across industries.”

This confirms what I argued in a recent debate on the role of profitability.  The huge profits gained since the end of the Great Recession have been mostly confined to the large companies: “just a few mega companies hold most of the cash while thousands of small and medium enterprises (SMEs) hold little cash and much more debt.  Indeed, a minority are really ‘zombie’ firms just raising enough profit to service their debt.”

It is easy to see why there are so many zombies.  Despite the relative recovery of headline profitability in many economies in the credit-fuelled boom from 2002 to 2006, many small to medium-sized companies did not see an improvement in profitability.  Instead they racked up higher debt through bank loans.  The Great Recession caused a collapse in profits and even after 2009, profitability improved little for these companies while debt remained high. But the zombie companies have struggled on because interest rates were so low and banks would not foreclose.  This scenario has been found in the extreme in Italy where ‘non-performing’ bank loans have reached 20% of GDP.

As the ECB explains in its report (ecb-zombie-credit-acharya-et-al-whatever-it-takes ),“While banks that benefited from the announcement increased their overall loan supply, this supply was mostly targeted towards low-quality firms with pre-existing lending relationships with these banks. As a result, there was no positive impact on real economic activity like employment or investment. Instead, these firms mainly used the newly acquired funds to build up cash reserves. Finally, we document that creditworthy firms in industries with a prevalence of zombie firms suffered significantly from the credit misallocation, which slowed down the economic recovery.”

According to research by the ‘free market’ Adam Smith Institute, 108,000 so-called zombie businesses in the UK are only able to service the interest on their debt, preventing them from restructuring. In other words, they slow the ‘creative destruction’ of capital by the liquidation of the weak for the strong.

This confirms previous studies such as that in the Journal of Finance (2009), Why firms have so much cash, which found that in order to compete, companies increasingly must invest in new and untried technology rather than just increase investment in existing equipment.  That’s riskier: “the greater importance of R&D relative to capital expenditures also has a permanent effect on the cash ratio. Because of lower asset tangibility, R&D investment opportunities are costlier to finance than capital using external capital expenditures. Consequently, greater R&D intensity relative to capital expenditures requires firms to hold a greater cash buffer against future shocks to internally generated cash flow.”  So companies have to build up cash reserves as sinking fund to cover likely losses on research and development.

Similarly, in a recent paper, Ben Broadbent from the Bank of England noted that UK companies were now setting very high hurdles for profitability before they would invest as they perceived that new investment was too risky. “Even if the crisis originated in the banking system there is now a higher hurdle for risky investment –  a rise in the perceived probability of an extremely bad economic outcome….In reality, many investments  involve sunk costs. Big FDI projects, in-firm training, R&D, the adoption of new technologies, even simple managerial reorganisations – these are all things that can improve productivity but have risky returns and cannot be easily reversed after the event.”  So the profitability of capital has got to be high enough both to justify riskier hi-tech investment and to cover a much higher debt burden (even if current servicing costs are low).  Firms are not going to borrow more to invest even if banks are willing to lend.

Marx’s theory of crisis rests on the idea that after a slump capital will only start to invest to raise the productivity of labour if profitability is rising and at a sufficient level.  Indeed, slumps in production should provide the basis for a recovery in profitability and a reduction in the debt burden (credit) built up to the point of the crisis. But right now there are thousands of heavily indebted SMEs which are barely keeping their heads above water despite low interest rates.  They are keeping profitability too low and debt too high.  They are clogging up the system.

Profitability in the major economies did recover from the trough reached at the depth of the Great Recession in 2009.  According the European Commission’s AMECO database, the net return on capital stock is up between 8-30% since 2009 in the major economies.  But even that recovery has not meant that profitability has returned to its previous peak (2005-7) before the great crash, varying from flat to down near 14%.  And in the UK and the US profitability is now falling, according to AMECO. At the same time, corporate debt levels are still high and rising. 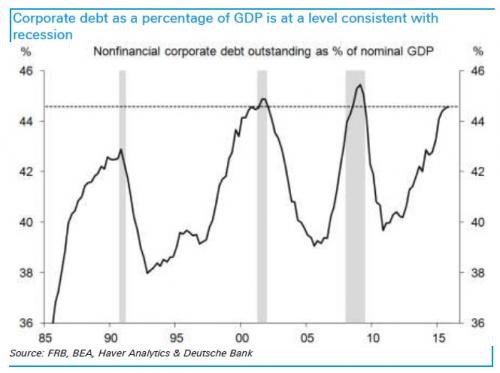 The most extreme strategists of capital recognise the ‘proper’ solution.  Back at the beginning of the Great Depression of the 1930s, the then US Treasury Secretary, Andrew Mellon, warned against keeping ‘dead’ capital going ‘zombie like’ as a ‘moral hazard’.  “Liquidate labour, liquidate stocks, liquidate farmers, liquidate real estate … it will purge the rottenness out of the system. People will work harder, live a more moral life. Values will be adjusted, and enterprising people will pick up from less enterprising people”.

The ‘solution’ for capital of ‘creative destruction’ in a slump or depression has not altered.  “The fundamental tenet of capitalism, which holds that some bad companies need to fail to make way for new and better ones, is being rewritten,” says Alan Bloom, global head of ‘restructuring’ at Ernst & Young management consultants. “Many European companies are just declining slowly and have an urgent need for new management, a revised capital structure or at worst to be allowed to fail,” he adds.

With corporate debt levels higher than before the global crash and profitability in most economies lower than before and now peaking again, ‘zombie’ companies are going to have to be removed in a new deluge before improved profitability and productivity can be achieved.

19 thoughts on “Beware the zombies”