China’s reaction to Donald Trump’s trade war has been to retaliate with its own tariffs on US exports to China, particularly agricultural/food exports like soybeans.  Also the government has allowed the Chinese currency, the yuan, to depreciate towards the bottom of its controlled range against the dollar.  This makes Chinese exports cheaper in dollar terms and so defeats the purpose of Trump’s tariff increases on Chinese goods coming into the US.

But there is a third move: a considered expansion in government investment in and funding of construction projects to boost domestic output to compensate for any decline in exports.  The policy of government investment was hugely successful in helping the Chinese economy avoid the consequences of the Great Recession back in 2008-9.  While all the major capitalist economies suffered a contraction in national output and investment, China continued to grow.  In 2009, when GDP in the advanced countries fell by 3.4%, Chinese growth was 9.1%. Only one capitalist economy also grew – Australia – an economy increasingly dependent on exports of its raw material resources to its fast-growing Asian giant neighbour.

Simon Wren-Lewis, leading British Keynesian economist and blogger, claims that China’s success in the Great Recession demonstrated two things: 1) that it was austerity that caused the Great Recession and the weak economic recovery afterwards in the major capitalist economies and 2) it was Keynesian policies (ie more government spending and running budget deficits) that enabled China to avoid the slump.

Well, it is no doubt true that after a massive slump in investment and production in the capitalist sector of the major economies in 2008-9, cutting back further on government spending would make the situation worse.  In that sense, ‘austerity’ was a wrong-headed policy for governments to adopt.  But as I have argued in many previous posts, austerity was not some insanity in economic terms for capitalism, as the Keynesians think.  It has a rational base: namely that with profitability in the capitalist sector very low, costs must be reduced and that includes reducing taxation of the capitalist sector.  Also the financial sector had to be bailed out.  It was much better to pay for that by reducing government spending and investment rather than raising taxes.  And the huge increase in public debt that resulted anyway would require controlling down the road.

But what about getting economies out of the slump with more government spending?  Wren-Lewis comments “China is a good example of that idea in action. What about all the naysayers who predicted financial disaster if this was done? Well there was a mini-crisis in China half a dozen years later, but it is hard to connect it back to stimulus spending and it had little impact on Chinese growth. What about the huge burden on future generations that such stimulus spending would create? Thanks to that programme, China now has a high speed rail network and is a global leader in railway construction.”

So you see, Keynesian policies work, as China shows, says Wren-Lewis.  But were China’s policies really Keynesian?  Strictly speaking, Keynesian macro management policies are increased government spending of any type (digging holes and filling them up again) in order ‘stimulate’ the capitalist sector to start investing and households to spend, not save, all through the effect of the ‘multiplier’.

Sure, Keynes talked about going further, with the ‘socialisation of investment’ as the last resort.  But no government of Keynesian persuasion has ever adopted that policy (if it meant taking over capitalist investment with state investment).  Indeed, the Wren-Lewis’s of this world never advocate or even mention the idea of the nationalisation or socialisation of capitalist sectors.  For them, Keynesian policy is government spending to ‘stimulate demand’.

China’s policy in the Great Recession was not just ‘fiscal stimulus’ in the Keynesian sense, but outright government or state investment in the economy.  It actually was ‘socialised investment’.  Investment is the key here –as I have argued in many posts – not consumption or any form of spending by government.  The Great Recession in the US economy was led and driven by a fall in capitalist investment, not in personal consumption or caused by ‘austerity’.  In Europe,100% of the decline in GDP was due to a fall in fixed investment.

As John Ross said on his blog at the time, “China is evidently the mirror image of the US …If the Great Recession in the US was caused by a precipitate fall in fixed investment, China’s avoidance of recession, and its rapid economic growth, was driven by the rise in fixed investment. Given this contrast, the reason for the difference in performance between the US and Chinese economies during the financial crisis is evident.”

Wren-Lewis thinks that Keynesian measures would have done the trick and it was “a failure of imagination” by the governments of major economies not to act, but instead impose ‘austerity’.

It’s true that the governments of the major capitalist economies did not follow China’s example partly because they were ideologically opposed to state investment – indeed, their first measure of ‘austerity’ was to cut government investment projects – the quickest way to cut spending.

But the main issue was not ideology or a “lack of imagination”.  It is that Keynesian stimulus policies do not work in a predominantly capitalist economy where the profitability of capitalist investment is very low and so investment is falling.  With government investment in advanced capitalist economies only around 3% of GDP compared to capitalist sector investment of 15%-plus, it would take a massive switch to the public sector to have an effect.  ‘Stimulating’ capitalist investment with low interest rates and welfare spending would not be enough.  Capitalist investment would have to be replaced by state ‘socialised’ investment.  That only has happened (temporarily) in war economies (as 1940-45).  In the last ten years, in the US, Europe and Japan, it has been capitalists who made the decisions on investment and employment and they did so on the basis of profit not economic recovery.  Quantitative easing and fiscal stimulus – the two Keynesian policy planks – were ineffective as a result. In contrast, China’s fixed investment increased rapidly because it was driven by a programme of both direct state investment and use of state owned banks to rapidly expand company financing.

This difference between Keynesian measures in capitalist economies and China’s state-directed investment is about to be tested again.  Most mainstream economists are predicting that China will take a hit from any trade war with Trump’s America and economic growth is set to slow – indeed, there is a growing risk of a huge debt-induced slump.  But the Chinese authorities are already reacting.  Ordinary budget deficits (fiscal ‘stimulus’) are being supplemented with outright state funding of investment projects (dark blue in graph). 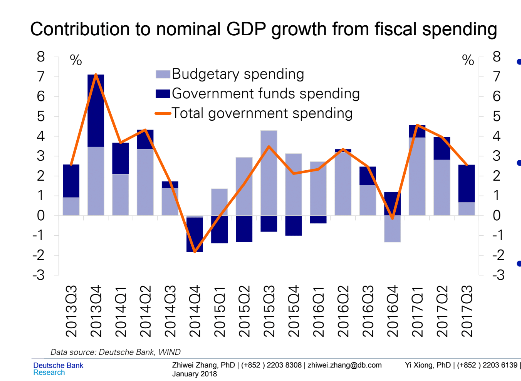 Most of this government investment funding is coming from sales of land by local authorities.  Through local government funding vehicles (LGFV), they build roads, homes, cities by selling land to developers.  But funds also come directly from the national government (80%). 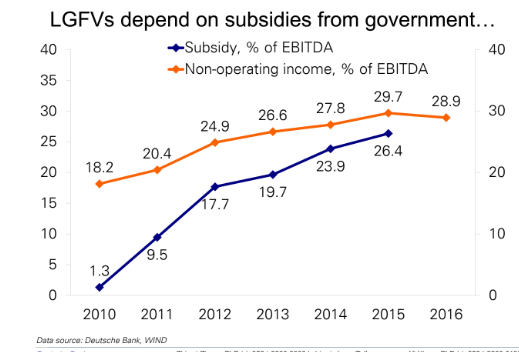 We can expect such funding to rise and investment projects to expand if China’s exports drop back from a trade war with the US.  State investment will keep China’s economy motoring, while the major capitalist economies flounder.