At the time of the general election in Turkey, I pointed out that Turkey was near the top of the pile for a debt and currency crisis. It was running a massive current account (trade and payments) deficit with other countries and its external debt (what it owes to other countries in credits) was over 50% of its annual output (GDP), the highest among major ‘emerging economies’, while it foreign exchange reserves to cover repayments and support the value of the currency, the Turkish lira, were just 12% of GDP.  The country was now being run a self-aggrandising autocrat in (what we now call) “Trump-style”, and who was refusing to allow the main monetary authority, the Central Bank of Turkey, to impose higher interest rates in order to ‘curb’ inflation and attract ‘hot money’ from foreigners; or to implement any fiscal austerity, orthodox capitalist style. 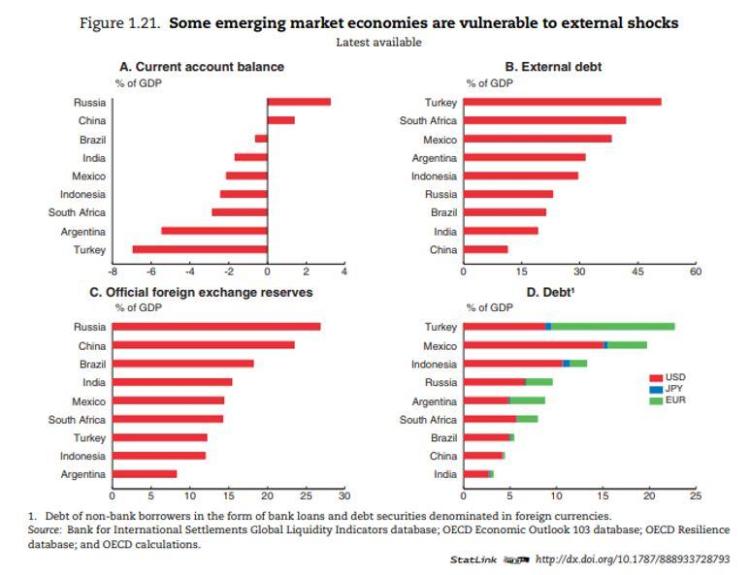 The only escape valve was a collapse in the lira.  And in the last few weeks, the currency has depreciated exponentially.  And fear that Turkish banks and corporations will not be able to pay their debts and the economy will suffer a meltdown has driven up the cost of its bonds and insuring against default (CDS). 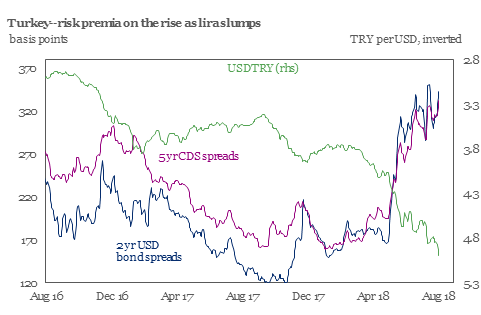 But Turkey is just the most extreme example of the growing debt crisis beginning to hit economies that depend on foreign capital flows and investment in order to grow (and that’s most).  I have raised this prospect of an emerging economy debt crisis in previous posts, most recently with the fall of the Argentine peso.  A strong dollar (the main currency of loans), rising interest rates (with the Fed and now the Bank of England hiking policy rates) and higher oil prices for those that must import energy (eg Argentina, Turkey, Ukraine, South Africa etc): are the factors triggering this impending crisis – not seen since the Asian/EM crisis of 1998.

According to the IIF, the international research body of major multi-national banks, global debt (including financial sector debt) has reached $247trn, nearly 250% of world GDP.  That would mean world debt grew something like 13% in the three years ended 2017.

And as I have argued before, the locus of this impending debt crisis is not to be found in household debt (as it was in the global credit crunch in 2007 that led to the Great Recession) or in public sector debt (where governments have been applying stringent ‘austerity’ measures), but in corporate debt (the heart of capitalist accumulation).

The global financial crash of 2008-9, ten years ago, did not lead to a total collapse of capitalism, even though it triggered the worst slump in investment and production since the 1930s.  The financial sector was bailed out by huge injections of credit and cash and the capitalist sector was supported by zero or even negative interest rate policy by the central banks and unprecedented levels of money ‘printing’, called quantitative easing.  The result was not much of an expansion in investment or production.  In the major capitalist economies, economic growth (real GDP growth) has averaged no more than 2% a year (slightly more in the US and less elsewhere).  In the so-called emerging economies, average growth rates also fell back.  But above all, debt in all sectors rose.  The result was inflated financial asset prices without the kind of “recovery” seen in previous ‘business cycles’.

Just a decade after the Great Recession, the average US non-financial business went from 3.4x leverage (debt to earnings) to 4.1x. They are now roughly 20% more leveraged than they were the last time all hell broke loose. While Trump boasts of 4% growth and the US corporate sector never having it so good, the level of corporate debt in the US, alongside rising interest rates, is setting the scene for a new debt crisis.

How will such a crisis emerge? In the next year, US companies must refinance about $4trn of bonds, almost all of it at higher interest rates. This will hit debt-burdened companies that are already struggling and make it almost impossible for some to keep operating. Lenders, i.e. high-yield bond holders, will try to exit their positions all at once only to find a severe shortage of willing buyers. Something, possibly high-yield bonds, will set off a liquidity scramble. 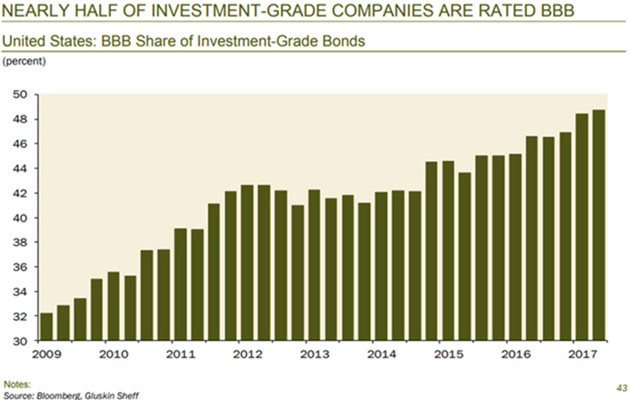 Almost half of US investment-grade companies are rated BBB (just above ‘junk’) and could easily slip into junk status in a downturn. Rising defaults will force banks to reduce lending, depriving previously stable businesses of working capital. This will reduce earnings and economic growth. The lower growth will turn into negative growth and we will enter recession.  That is the likely scenario ahead.

Returning to ‘emerging’ economies, already banks and financial institutions globally are cutting back on their loans to the likes of Turkey etc. 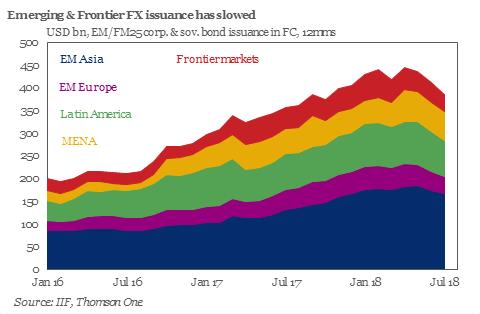 But also capital flows from the non-financial sector to invest globally have declined.  Global foreign direct investment (FDI) flows fell by 23% to $1.43 trn in 2017, according to the latest report by UNCTAD.  Investment in new projects fell 14%.  Interestingly, most of this fall was between the advanced capitalist economies.  FDI flows to developing economies remained stable at $671 billion, after a 10 per cent drop in 2016.  But inward FDI flows to developed economies fell sharply, by 37 per cent, to $712 billion. 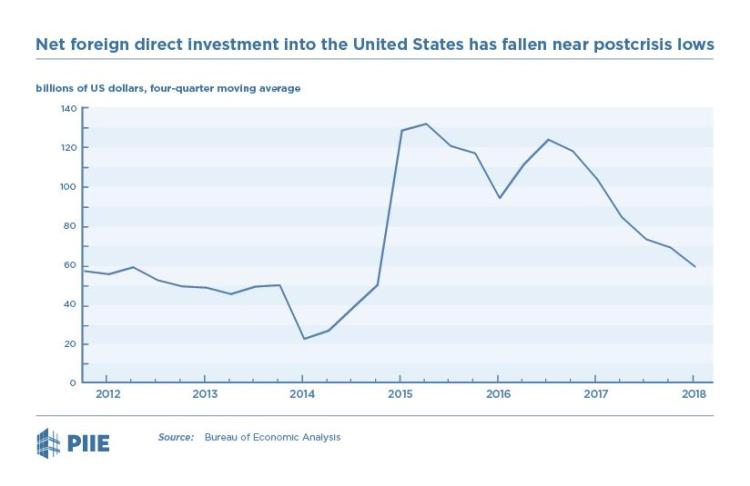 Global capital movements, driven mainly by debt-related flows, increased rapidly in the run-up to the financial crisis but then collapsed from 22% of global GDP in 2007 to just 3.2% in 2008. The subsequent recovery was modest and short-lived. In 2015, flows were still only 4.7% of global GDP.  Cross-border capital flows remain well below pre-crisis levels.  Overall net capital flows to ‘emerging’ economies were actually negative in 2015 and 2016, before turning slightly positive in 2017. 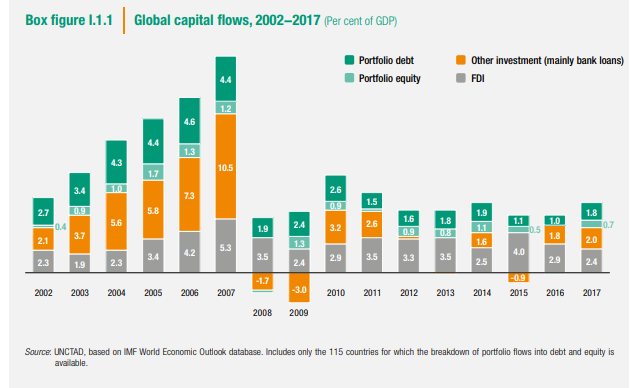 According to UNCTAD, “projections for global FDI in 2018 show fragile growth”. Global flows are forecast to increase marginally, by up to 10%, but remain well below the average over the past ten years. Multi-national companies are cutting back on international investment, partly because of the risk of a future trade war after Trump’s protectionist measures; and partly because possible debt crises in the most vulnerable ‘emerging’ economies.  But a key reason is a fall in profitability from overseas investment.  UNCTAD found that the global average return on foreign investment is now at 6.7%, down from 8.1% in 2012. Return on investment is in decline across all regions, with the sharpest drops in Africa, Latin America and the Caribbean.

As a result, the rate of expansion of international production is slowing down.  Assets and employees are increasing at a slower rate. Growth in the global value chain (GVC) has stagnated. Foreign investor profit in global trade peaked in 2010–2012 after two decades of continuous increases. UNCTAD’s GVC data show foreign value added down 1 percentage point to 30% of trade in 2017.  It’s not just as profitable to trade or invest globally compared to before the Great Recession. 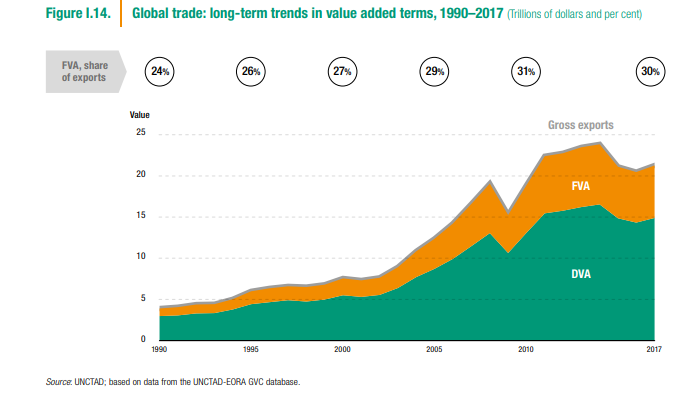 The story of the last ten years since the Great Recession is that the world capitalist economy has staggered on at low levels of growth and investment and with virtually no improvement in real incomes for the 90%.  And it has only staggered on because of a huge build-up in debt, particularly in the capitalist sector.  Now, monetary authorities are trying to reverse the credit binge and restore ‘normality’.  As a result, the cost of servicing that debt is on the rise and availability of more credit to finance is shrinking.

When we read the financial press, we see the huge profits being made by the top companies (mainly in the US – in Europe, profits are down even for the large), but the vast majority of companies are still not achieving the profitability they need to finance their debts if the cost of servicing rises sufficiently.  And globally, banks and corporate investors are reducing their loans and investments because of low profitability and concerns about declining trade growth and a global trade war.  And that pending trade war still has some way to go.

7 thoughts on “A new global credit crunch to come?”