A new index of human development (HDI) has been created.  The origins of the HDI are found in the annual Development Reports of the United Nations Development Programme (UNDP). These were devised and launched by Pakistani economist Mahbub ul Haq in 1990 and had the explicit purpose “to shift the focus of development economics from national income accounting to people-centered policies”.

Human well-being is widely viewed as a multidimensional phenomenon of which income is only one facet.  Human development defined as “a process of enlarging people’s choices” (UNDP 1990, p. 10), namely, enjoying a healthy life, acquiring knowledge and achieving a decent standard of living provides a long-run view of human well-being.

The Historical Index of Human Development (HIHD) covers up to 157 countries from the mid-19thcentury – before large-scale improvements in health helped by the diffusion of the germ theory of disease and in primary education began – to 2007, the eve of the Great Recession.

Social dimensions have driven human development gains across the board over the long run. Longevity accounts for the larger share during the first half of the 20th century.  Persistent gains in lower mortality and higher survival were achieved as infectious disease gave way to chronic disease, which was experienced in developing regions from 1920 to the 1960s.

Medical technological change – including the diffusion of the germ theory of disease (1880s), new vaccines (1890s), sulpha drugs to cure infectious diseases (late 1930s) and antibiotics (1950s) – has been a main force behind the major advancement in longevity and quality of life. Economic growth also contributed to expanding longevity through nutrition improvements that strengthened the immune system and reduced morbidity and public provision of health.

According to the index, although the gap between the advanced capitalist economies and the ‘Third World’ widened in absolute terms; in relative terms, there was a narrowing.  The Russian revolution from the 1920s and the Chinese one after 1947 led to fast industrialisation and a sharp improvement in health and education for hundreds of millions.  The second world war killed and displaced millions, but it also laid the basis for state intervention and the welfare state that had to be accepted by capital after the war, during the so-called ‘Golden Age’.

But after 1970, the gap in human development widened once again with globalisation, rising inequalities and the capitalist neo-liberal counter-revolution.  Only China closed the gap.  Since 1970, longevity gains have slowed down in most emerging economies, except China, and all the world regions have fallen behind in terms of the longevity index.

What is significant to me is the parallel connection between economic growth, narrowing inequality and human development between 1920-1970 and the reversal of those trends since 1970. Branco Milanovic has done major work on measuring inequality of income per head between countries and regions (rather than inequality within an economy).  He confirms the results of the human development index.  He finds that in the 1970s and 1980s, inequality between countries did not worsen.

It was the benign view of Simon Kuznets that when capitalist economies ‘take off’ and industrialise, inequality of incomes will rise, but eventually, as economies ‘mature’, income inequality declines.  Thus we have a ‘bell curve’ of inequality and human welfare. 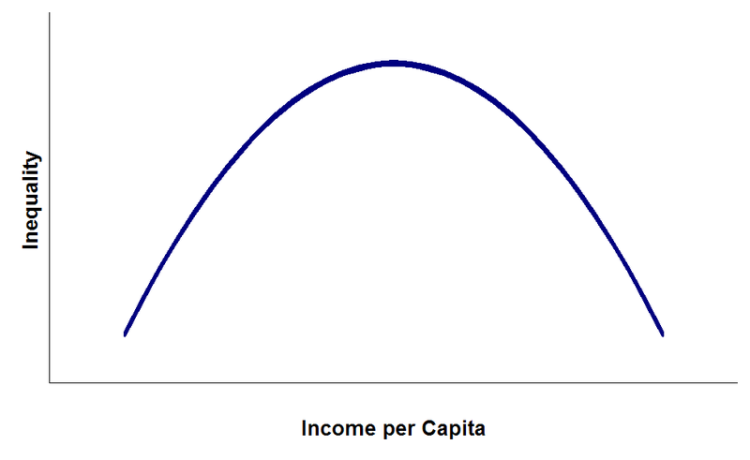 But the evidence of modern capitalism in the last 40 years is the opposite. In the past 25 years, Milanovic finds what he calls ‘twin peaks’, rapid growth in middle-income countries, fast growth in top income countries and a slipping behind in low-income countries. Some claim that this means inequality is narrowing for all.  But the falling inequality between nations that Milanovic finds (and now lauded by various right-wing economists and even some Keynesians) is almost entirely due to the stupendous growth of China which has taken hundreds of millions out of poverty.CHINA PAPER July 2015

China has raised 620 million people out of internationally defined poverty. Its rate of economic growth may have been matched by emerging capitalist economies for a while back in the 19th century when they were taking off‘. But no country has ever grown so fast and been so large (with 22% of the world‘s population) – only India, with 16% of the world‘s people, is close. In 2010, 87 countries had a higher per capita GDP than China, but 83 were lower. Back in the early 1980s, three-quarters of the world‘s people were better off than the average Chinese. Now only 31% are. This is an achievement without precedent.  Take out China and inequality between the top income countries and others has widened.

Rising inequality between countries and a worsening human development index all kicked in from the 1990s onwards as capital spread its tentacles into emerging economies (globalisation) and public sector spending on health prevention and care and on education was cut back (neoliberalism); all to reverse the low levels of profitability for capital reached globally in the early 1980s.

This connection between growth, human development and inequality between countries is also confirmed by the change in inequality of wealth and income within most economies after 1970 that Thomas Piketty and others have recorded and tried to explain.

As Piketty has shown, there is an inherent tendency for inequality of wealth to worsen as capitalism expands: Piketty’s now famous formula that r (the rate of profit for capital) will outstrip g (the rate of growth in output).  But sometimes, this tendency is overcome by counter-tendencies as between 1913-1950, when g rose faster than r and inequality fell.

The idea of an inherent tendency with counter-tendencies smacks of the dialectical method of analysis that Marx adopted for his own laws of motion of capitalism.  Piketty misunderstood or dismissed Marx’s laws and provided his own, but at least he recognised the method – now trashed by our modern Marxian economists.

What Piketty finds is the opposite of Kuznets’ bell curve – a U-shape as the decline in inequality of wealth for the brief inter-war and early post-war period gives way to a degree of inequality not seen since the late 19th century – and according to the human development index, the end of catching up of the most of the world in health, longevity and education.

Economic growth, higher incomes and wealth, development in health and education: all are key to human ‘progress’.  The evidence shows that in the last 30 years or so, progress has slowed significantly and the gap between the very top (whether measured by country or top 1% within a country) and the rest has widened, not narrowed.

Piketty and Marx are refuting Kuznets and the apologists of capital.