The world economy crawls along and mainstream economists remain worried that a typical sustained economic recovery i.e led by rising business investment generating more jobs and a reduction in unemployment boosting consumption, is absent.   The answer of the Austerians is that the economy and the people must wait until the overhang of debt in the major capitalist economies is removed and, primarily, this means a reduction in public sector debt and deficit levels and real wage cuts.  The answer of the Keynesians is the opposite: instead we need to keep interest rates low by central bank monetary measures and also expand government spending and borrowing to stimulate investment; or fill the gaps in private sector investment and consumption (aggregate demand) with public investment and consumption.  Don’t worry about debt levels, but spend now and, with growth, the debt will look after itself.

This debate continues because nothing seems to work: austerity or traditional Keynesian monetary easing.  Although central banks have lowered short-term interest rates nearly to zero, so that we have negative real interest rates (after inflation) and central banks have pumped trillions of dollars into the banking system, the banks,  still overloaded with debts and weakened balance sheets, are unable or unwilling to lend.  And anyway, the large corporations are flush with cash and don’t need to borrow.  Yet they are still unwilling to invest at sufficient levels to restore booming economies. 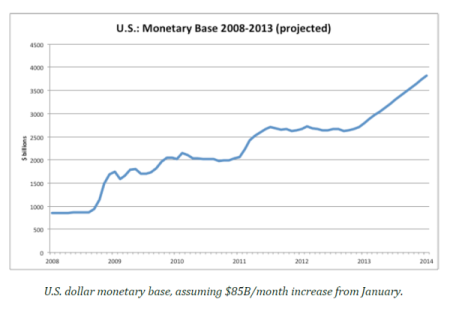 So now some Keynesians are calling for more unconventional measures, closer to the policies advocated by the proponents of modern monetary theory (MMT).  They say, let’s bypass the banking system altogether and get central banks and governments to lend money directly to households and small businesses – in a way, just get a helicopter and drop the cash across the country.  ‘Helicopter money’ is the analogy first hinted at by Ben Bernanke, the current chief of the Federal Reserve, when he argued that the Fed had the power to stimulate the economy by printing money and directly delivering it to the spenders.  He did not advocate doing this, just that it was possible.

Along with the idea of ‘helicopter money’ comes the idea that governments should just increase spending and rather than finance the extra spending by issuing bonds to be purchased by the banks and pension funds at increasingly high rates of interest, just get the central bank to buy them direct by creating more money.  Why should the central bank create money simply to give to the banks, which are not lending anyway?  Why not increase money supply to give to the government to spend or to the people direct?  As Martin Wolf put it in his recent column: “I fail to see any moral force to the idea that fiat money should only promote private spending”.  Adair Turner, the UK’s former head bank regulator, raised the same ideas – bypass the banks and let government spending be financed directly by the central bank.

As Wolf puts it, “When expanding private credit and spending is so hard, if not downright dangerous, the case for using the state’s power to create credit and money in support of public spending is strong. The quantity of extra central bank money required would surely be smaller than under today’s scattergun quantitative easing.”   As Lord Turner notes, “Japan should have done some outright monetary financing over the last 20 years, and if it had done so would now have a higher nominal gross domestic product, some combination of a higher price level and a higher real output level, and a lower debt to gross domestic product ratio”.

These proposals are also linked to what used to be called the Chicago Plan, namely the proposal of a group of economists at the University of Chicago in the 1930s who responded to the Depression by arguing for severing the link between the supply of credit to the private sector and creation of money.   The other leading economist of the time (apart from Keynes), Irving Fisher supported the idea, as did Milton Friedman in “A Monetary and Fiscal Framework for Economic Stability”, published in 1948.  The essence of this plan was full backing of deposits by public debt. This scheme, they argued, would eliminate the instability of private credit and debt, dramatically reduce overt public debt and largely eliminate the many defects of current forms of private debt.    Now some economists at the IMF have resurrected the idea in a recent working paper, “The Chicago Plan Revisited” ( IMF Working Paper WP/12/202).  IMF Working Paper WP/12/202.   Minskyite Modern Monetary Theory radical economist, Steve Keen, has also got excited about this Chicago Plan as a way round the blockages of the banking system and the dreaded risk of expanding uncontrollable private credit, which Keen sees (ironically rather like the right-wing Austrian school) as the real devil in the capitalist system (http://rwer.wordpress.com/2012/11/12/the-imf-gets-radical/).

The Chicago Plan proposes changing the nature of money and money creation in the economy from a nominally private-sector affair, in which commercial banks serve as the engines of money growth, to an exclusively public sector one.  On the surface, the Chicago plan has some very attractive benefits.  First, there would be a switch from national debt to national surplus, as if by magic. “Because under the Chicago Plan banks have to borrow reserves from the treasury to fully back liabilities, the government acquires a very large asset vis-à-vis banks. Our analysis finds that the government is left with a much lower, in fact negative, net debt burden.”   The IMF paper says total liabilities of the US financial system – including shadow banking – are about 200% of GDP.  The new reserve rule would create a windfall. This would be used for a “potentially a very large, buy-back of private debt”, perhaps 100% of GDP.   In other words, if the central bank provides new money to the government, it can buy bank assets and so reduce the net debt figures for the government – just by creating money out of thin air!

Second, private banks would lose the power to create deposits by making loans, as all deposits would have to be backed by public sector debt or by bank profits.  In effect, lending would be controlled directly by government.  “The control of credit growth would become much more straightforward because banks would no longer be able, as they are today, to generate their own funding, deposits, in the act of lending, an extraordinary privilege that is not enjoyed by any other type of business,” says the IMF paper. “Rather, banks would become what many erroneously believe them to be today, pure intermediaries that depend on obtaining outside funding before being able to lend.”  And that outside funding would be the government.

This all sounds great.  So what is wrong with it?  Well, first, the private banking system would be sent to jail.  Only governments would have the power to expand reserves and thus lending.  Well what’s wrong with that, you might say?  Well, the banks would still be privately owned, but now on the brink of going bust or having to turn into outright speculative investment operations like hedge funds to make a profit.  So, in some way, there would be even more instability in the banking system than before, not less.   The Chicago Plan would only work if the banks were brought into public ownership and made part of an overall funding and investment plan.  But if that happened, there would be no need for a Chicago Plan.

Then there is inflation.  Creating money out of thin air means that money supply can move out of line with growth in the real economy, namely commodity production in the capitalist sector.  Unless production in the capitalist sector expands, more money will start chasing less goods.  Price inflation will ensue and so will financial asset speculation.   Real incomes for the average worker will be hit by rising prices, instead of falling employment.  Keynesians like Turner deny this.  For them, government spending financed by central bank monetisation, or helicopter money, will boost ‘aggregate demand’ , i.e investment and consumption and so economic growth will return to match the expansion in the money supply.

But will it?  Once again, we are back at the heart of the flaw in the Keynesian model (raised many times in this blog – see https://thenextrecession.wordpress.com/2012/04/21/paul-krugman-steve-keen-and-the-mysticism-of-keynesian-economics/ and https://thenextrecession.wordpress.com/2012/06/13/keynes-the-profits-equation-and-the-marxist-multiplier/).  For Keynesians, you can create extra spending through money creation.  This leads to increased employment and then to increased income and growth and thus to more profits.  But the reality of the capitalist system is the other way round.  Only if profitability is sufficient will investment increase and lead to more jobs and then incomes and consumption.  The demand for money will rise accordingly.  Artificial money creation by fiat from the government does not get round this – as the experience of ‘quantitative easing’ has already shown.

Adair Turner reckons that monetisation of Japan’s public debt with some increased inflation would have avoided Japan’s lost decade.  Well, the evidence is against that as my recent posts have argued (see,  https://thenextrecession.wordpress.com/2013/02/14/japans-lost-decades-unpacked-and-repacked/).  The outcome of debt monetisation or a Chicago plan to bypass the banking system will not be a sustained economic recovery, but either a new bout of financial asset speculation or rising prices in the shops, or both.  It is not the banking system that has to be bypassed but the capitalist system of production for profit that has to replaced by planned investment under common ownership.  Indeed, if the banking system is circumvented, the capitalist system of production will be thrown into greater confusion.

12 thoughts on “Helicopter money and the Chicago plan”