With just two days to go, all the public opinion polls indicate that Democratic Party candidate Joe Biden is going to win the US presidential election and oust incumbent Donald Trump.  The Democrats will also solidify their majority in the lower house of the US Congress, the House of Representatives; and perhaps take over the upper house, the Senate. But even without the latter, Biden and the Democrats will have the political power to change the course of the COVID pandemic and the US economy over the next few years. But can they or will they do so?

First, let us remind ourselves of the challenges they face.  The US economy is suffering the worst economic slump since the 1930s. The US Q3 GDP figures released a few days ago show that the US economy is still well below its pre-pandemic level.

US GDP is still 3.5% below its pre-pandemic level, while business investment is still some 5% below. Indeed, US real GDP is really back only to levels near the bottom of the last slump in the Great Recession of 2008-9.

And out of more than 22 million jobs lost in March and April during the lockdowns, only around 11.3 million have been recovered so far, while a new stimulus bill in the old Congress supposedly to help the unemployed was never approved.

While the Federal government has been supplied with funds from Congress, raised by the Federal Reserve through the purchase of government bonds, the states and local counties have been starved of funds and forced to lay off hundreds of thousands of public employees.

Meanwhile, the COVID pandemic continues to rage across the country with infection rates at record highs, encouraging people to stay at home to work (if they can); not to meet up, travel or spend on restaurants and leisure activities – even if many state governors continue to say it is fine to do so.  As a result, the recovery in transactions and activities that began over the summer has stopped in its tracks. And there is still no ‘silver bullet’ of an effective vaccine in sight. 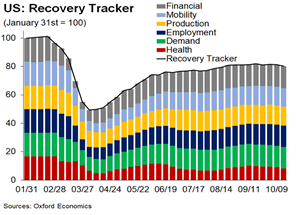 With business investment in productive activities showing little sign of recovery and employment well down, a return to the pre-pandemic trajectory of economic growth and employment is years away. Indeed, according to Oxford Economics, real GDP growth won’t return to its previous trend at all. Far from a V-shaped economic recovery, or even a U-shaped one, it’s a reverse square root trajectory, as I argued it would be.

It’s the same trajectory of economic growth that emerged after the Great Recession of 2008-9 that I spelt out in my book, The Long Depression.  The US and other major capitalist economies appear to be entering another leg of that depression, ie low growth, low productive investment, low wage employment and, behind all that, low profitability in productive assets – even if the pandemic comes under control.

Remember before this pandemic erupted across the world, most capitalist economies, including the US, were already tipping into a recession, with investment slowing or even falling and production and trade stagnating.

Can a Biden administration do anything about this and is it willing to do so?  According to the Biden economic team, the administration plans to increase public sector spending to compensate for the capitalist sector ‘investment strike’.  Biden proposes to spend $2trn on infrastructure spending (something Trump never got round to) including ‘clean energy’ projects; just under $2trn on education and child care; $1.6trn on health care; $700bn on research and development; and $500bn on social security and housing. That’s a total of $6.8trn., or just over 30% of current GDP.

And then there is the method of paying for this.  Biden proposes to raise taxes by $2.4trn over ten year (or $1.2trn if the spend measures are reduced).  So nearly half of the spending plans would be clawed back in taxation.  Most of the tax revenue would come from the top income earners particularly those in the million-dollar bracket.  Also, corporation tax would be raised from the current 21% under Trump to 24% – but it would still be well under the 28% under Obama, so corporations would continue to benefit from windfall profits.  Indeed, the increase would raise only a paltry $725bn over ten years. There would be no increases in property taxes for the rich.  Overall, the most likely net spend after taxes under the Biden plan would be just around $1.8tn over 10 years, or no more than 0.8% of GDP a year!

So everything depends on the ‘Keynesian multiplier’ ie the increase in real GDP growth induced from an increase in government spending.  Say the multiplier was as high as 2 or even 3 in the slump environment (that’s way higher than most studies show it would be ‘normally’ – it could be much lower than one), then Biden’s plan would boost real GDP growth next year by say 2% pts above the current likely growth rate next year.  Biden’s plans also include boosting net immigration and pulling back on some of the tariffs on Chinese imports.  Putting all this together, Oxford Economics reckons Biden’s plans would lead to a real GDP growth rate of 4.9-5.7% in 2021 compared to the status quo under Trump of 2.3-3.7%.

So even if it worked, Biden’s boom would amount to a maximum 2-2.5% pt of GDP boost to the economy over the next two years. That may get the US economy back to pre-COVID levels by the end of next year, but thereafter the growth trajectory would sink below even the weak pre-COVID growth path. The US economy would be trundling along at 1.5% a year for the foreseeable future and under 1% a year per capita GDP growth (after population increase is accounted for).

And that stagnation is likely unless the profitability of capitalist productive investment rises sharply under Biden. US corporate profitability is currently at a post 1945 low. Don’t be fooled by the huge profits being made by the likes of Apple, Microsoft, Facebook, Google, Netflix etc.  The profits of the FAANGs are the exception that proves the rule.  Outside this charmed circle, US companies are struggling to make sufficient profit to expand investment, despite historic low interest rates in order to borrow funds for investment. If interest rates do start to rise again in any recovery, particularly for small to medium sized companies which can only just service existing debts (so-called zombie companies), then far from a recovery, there could be a financial bust. 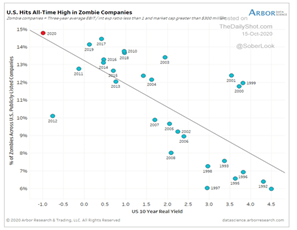 And then there is the public sector debt.  Under Biden’s plan, the US Federal budget deficit will rise a cumulative $2 trillion during his first term. Publicly traded federal debt as a percent of GDP will increase from 108% when he takes office to 120% by the end of his term and 130% of GDP by the end of the decade. So even if the Federal Reserve maintains its current ‘zero interest rate’ policy and long-term bond yields remain low, the interest on government debt will rise by at least 1% of GDP.  That will eat into available revenue to spend on public services.  As public debt and the cost of servicing it rises, the pressure will mount on the Biden administration to ‘balance the budget’, revoke the spending plans and/or apply more tax increases on the general public.

You might say that politicians and mainstream economic policy have learnt their lesson and now realise that ‘austerity’ only makes things worse by reducing spending and ‘effective demand’.  So austerity policies won’t be revived.  After all, even the IMF is saying ‘spend as much as necessary and don’t worry about the consequences for debt now’.  But that’s now – in the depth of the pandemic slump.  When debt costs and government measures mount on the capitalist sector, capitalism will look to protect already weak profits by cutting government taxes and spending.

The supporters of Modern Monetary Theory may cry out at this point and argue that governments do not need to borrow money through debt issuance and so run up interest costs. They can just get the central banks to ‘print’ the currency and put it in the government coffers. Rising public debt is then not an obstacle to government investment and spending in order to boost the economy and deliver full employment. In a way, that is right if government spending is productive for the economy.  But what is an obstacle is the willingness and capability of the capitalist sector to invest if profitability is low.

That is not on Biden’s agenda or, for that matter, on the agenda of MMT supporters, because such a move would be way more than just ‘stimulating’ the capitalist sector but actually mean ‘replacing’ its investment role.  It would mean an economic revolution not wanted by Biden, and not envisaged by MMT.

In an editorial entitled “Bidenomics can preserve support for capitalism”, the Financial Times put it thus: “Since John Maynard Keynes, the best case for state intervention has not been to abolish the market, but to preserve public support for it”; and while “if implemented, Bidenomics would make life more burdensome for business and for high-earners, it might also avert a larger reckoning further down the line.”

That’s the aim of Bidenomics.

9 thoughts on “Bidenomics: boom or bust?”