It is a risky thing to start analysing the COVID stats and coming up with some conclusions at this still early stage of the pandemic.  It is even riskier for an economist to delve into areas beyond his or her supposed expertise.  But after looking at myriads of articles, heaps of data and lots of presentations by people who ought to know what they are talking about, I cannot resist putting my dollar on the table.

The first point that I want to make is on the severity of the COVID-19 virus.  On any reasonable estimate of the mortality rate, assuming no containment measures, then we could expect up to 60% of the population on average to be infected before the virus wanes with so-called ‘herd immunity’.  The mortality rate is very difficult to be clear about, varying from the 3-4% that the World Health Organisation (WHO) reckons based on existing cases, down to some local studies that put the rate at more like 0.3-0.4% on extrapolating the number of infections from mass testing.  Even that rate would be three to four time the average annual influenza mortality rate.

Anyway, if I make an arbitrary rate of 1% of the population- an estimate that many epidiemologists seem to latch onto, then in a global population of 7.8bn, and given a 60% ‘herd immunity’ level, that would mean about 45m deaths globally.  Given that there are on average about 57m deaths a year, an uncontained virus would have raised 2020’s death rate by 80%.  For individual countries, that increase would vary between 65% to double.  Even if the (uncontained) mortality rate turns out be half that, then over 20m people would die, or some 40% more than usual.

But the Malthusian argument could then be presented.  As something like 70-80% of these deaths would be for those 70 years and over and there are negligible deaths among those under 40 years, the impact of the virus does not matter.

Indeed, some in financial circles argue that the virus is ‘getting rid’ of the old and the sick who are mostly unproductive in generating value and profit.  After the pandemic is over, the world will be ‘leaner and fitter’ and able to expand more ‘productively’.

Marx and Engels were vehement in their condemnation of Malthus’ ‘survival of the fittest’ theory; Engels calling it “this vile, infamous theory, this hideous blasphemy against nature and mankind”.  But they did not condemn it on anti-humane grounds only, but also that Malthus was wrong economically too.  Productivity growth does not depend on keeping the population down but on increasing the productive forces and on the march of science and technology.  It is not an issue of overpopulation but one of inequality and poverty bred by capitalist accumulation and appropriation of value created by the power of labour.

That is the key reason for attempting to contain COVID-19; to save lives that can be saved.  The other reason is that if the pandemic was allowed to spread unchecked, health systems would be overwhelmed, disrupting their ability to deal with existing patients and people with other illnesses; and probably causing an increase in such secondary mortality rates (and this time in younger fitter people too).  Most governments on the globe are not in a position of opting for Malthus and ignoring public pressure if the bodies of loved, old or sick, pile up.  If they did, they would not survive.

So containment of the virus was necessary.  But containment can mean many things.  It can mean from total lockdown of all economic and social movement and activity to more relaxed measures, down to simply testing everybody for the virus, isolating and quarantining those infected and shielding the old, while hospitalising those with severe conditions.  If a country had full testing facilities and staff to do ‘contact and trace’ and isolation; along with sufficient protective equipment, hospital beds including ICUs), then containment along these lines would work – without significant lockdown of the economy.

But nearly all countries were not prepared or able to provide the facilities and resources to do that.  Germany has come close and I shall show how successful that has been in a moment.  South Korea also maybe.  But in both countries, there has also been some important social and economic ‘lockdowns’.  Every other country with major infections has been forced to into a major lockdown of movement and isolation for weeks in order to contain the pandemic. China is the most exceptional example of a high level lockdown in one large province.  New Zealand applied a high level lockdown from day one and reduced deaths to the bare minimum.

Here is an estimate of the varying degrees of lockdown adopted by countries. 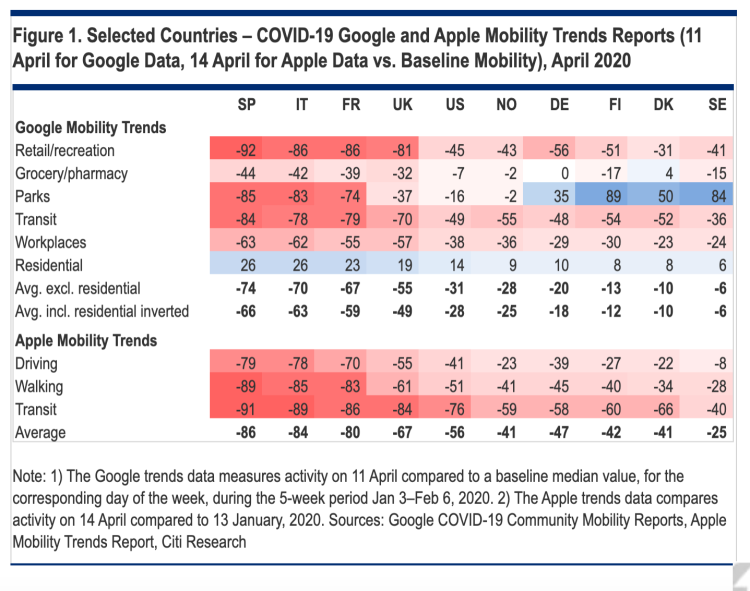 If you look at the average lines, you can see that on the Google mobility trend, Spain has delievered a 66% reduction in economic and social activity, while in Sweden it has been only 6%.

Has containment worked? It certainly has.  And here I am entering the risky territory of trying to measure the success of containment.  As above, I estimate that without any containment, there would have been about 45m deaths from COVID-19 in 2020.  But with containment, and partly using the forecast estimates of the Institute for Health Metric and Evaluation (IHME), I reckon that death toll will have been reduced to “just” 250-300,000.

Here are my estimates for various countries comparing the ‘no containment’ deaths with forecast accumulated deaths after containment.

So containment works.  But as it has been achieved mostly by drastic lockdowns, it is only at the cost of pushing the world economy off a cliff into a deep slump in production, jobs, investment – to be followed by a very slow recovery over years if containment has to be maintained at extreme levels to curb a re-occurrence of the pandemic, and/or until an effective vaccine can be produced along with mass testing and isolation methods.

Could the lockdowns have been avoided?  Well, as I said, I think if there had been facilities and staff for mass testing, contact and trace; enough hospital resources and a vaccine, lockdowns would not have been necessary.  Even poor countries have had success with these methods – see ‘Communist’ Kerala.

Are the extreme lockdowns imposed by China and some other countries unnecessary?  The Swedish authorities have opted to what might be called ‘lockdown-lite’, with restrictions only on mass gatherings and relying voluntary social isolation.  Is this working as well as draconian lockdowns in other countries?

Well, the evidence of potential accumulated deaths as projected by IHME for various countries suggests not.

Sweden is heading for one of the highest death rates in the world, only likely to be beaten by Belgium among the larger countries.  And compared to its Scandinavian neighbours (where restrictions are nearly double that of Sweden’s – see the mobility graph above), the Swedish mortality rate will be some two or three times greater.  It seems that the Swedish authorities have failed to protect the old, as the privatised residential homes have been engulfed with infections, just as they have been elsewhere.

But Belgium has a lockdown and will have a heavier mortality rate than Sweden, while Germany will do way better than countries like Spain and Italy where there are much more strict lockdowns.  What that suggests is that containment does not just depend on the level of restrictions and lockdown, but also on the level of hospital facilities and testing.

Germany’s surplus of hospital beds is much higher than in the rest of Europe.

And it is testing much more, if at still a low rate.

Sweden and Belgium have fewer beds and are doing less testing.

The Swedish ‘lockdown lite’ means more deaths per capita.  But the argument for it is that eventually the Swedish population will achieve ‘herd immunity’ and the economy can continue in the meantime without being shut down.  The first proposition is full of uncertainty: how will the authorities know that they have achieved such immunity?  The second proposition is clearly false.  No economy is an island.  Even if the Swedish economy continues to be open for business, where are its exports going to when much of the rest of the world is locked down?

So my tentative conclusions are that:

99 thoughts on “COVID-19 and containment”