As for Germany’s industrial sector, that clearly is in recession. Industrial production in Germany decreased 4.7% in November of 2018 over the same month in the previous year.

German companies have been hit by poorer sales from a world economic slowdown and political uncertainty surrounding Brexit and the trade war between the US and China. The UK, US and China are all among German makers’ biggest markets. 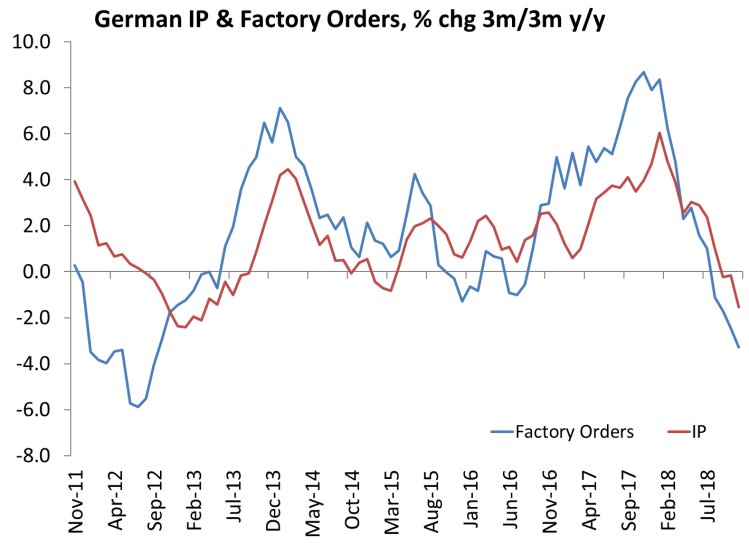 The collapse is particularly noticeable in the very important auto sector, where the global slowdown, sharp drops in demand and the restrictions on diesel car emissions have destroyed the auto sector globally.  Passenger vehicle sales in China, the world’s largest car market, fell for the first time last year since the early 1990s, down 4.1%.  Sales in December were down 15.8 per cent from the same month last year, the steepest monthly fall in more than six years and the sixth consecutive month of declining sales. 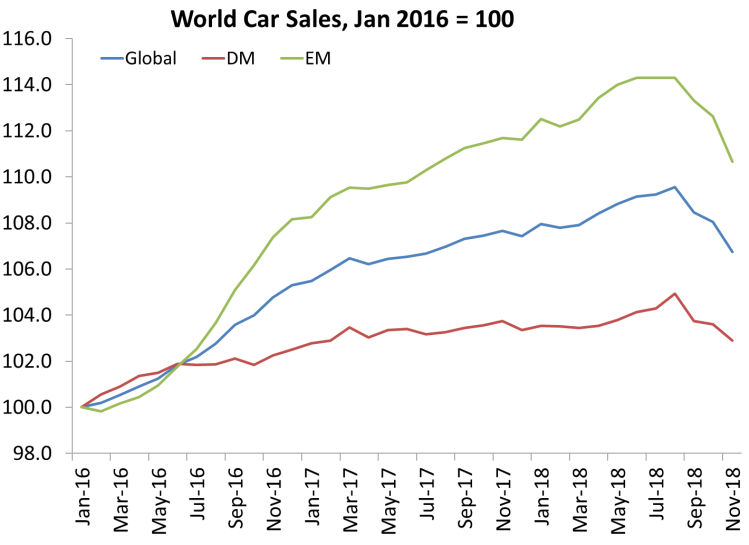 Germany has dragged down industrial production in the Euro Area.  It fell 3.3% year-on-year in November.  It is the first annual fall in industrial output since January of 2017 and the biggest since November of 2012.

Indeed, the German experience is being followed in varying degrees across the globe, at least in the major economies.  The global PMI, the key business activity indicator, shows a slowing down. The level of activity is still above 50 (and therefore indicates expansion) and is not yet down to the recession depths of 2012 or 2016, but it is on its way.

And the global PMI for ‘new orders’ shows a slowdown in both manufacturing and services globally. 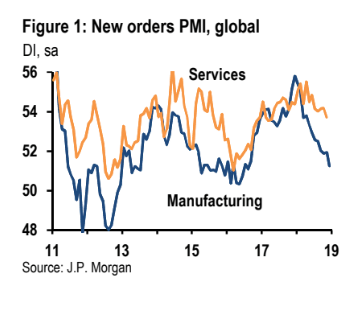 And among the so-called ‘emerging economies’, emergence is being replaced by submergence.  Real GDP in Latin America as a whole is contracting on annualised basis, according to investment bank JP Morgan. 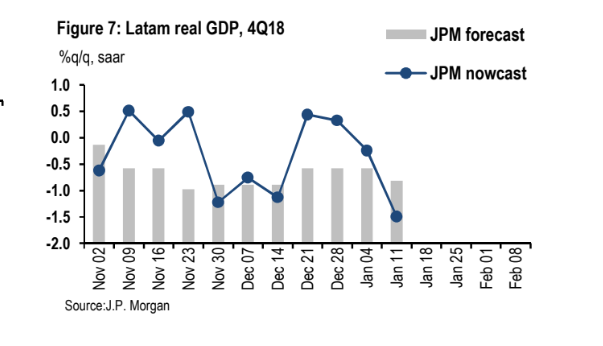 My post outlining an economic forecast in 2019 offered several different short-term indicators for the direction of the world economy.

The first was credit and the so-called ‘inverted yield curve’ ie the difference in the interest rate received for buying 10yr US government bonds and 2yr government bonds.  In a ‘normal’ situation, the interest rate earned for holding a longer term bond will be higher because the bond purchaser cannot get the bond back for ten years and there is higher risk from changes in inflation or default compared to a bond held over two years.  But on some rare occasions, the interest rate on two-year bonds can go higher than on ten-year ones.  This is because the interest rate is being driven up by hikes in the central bank rate and/or because investors are fearful of a recession, so they want to hold as much government paper as possible.  They sell their stocks and buy bonds.  Every time the yield curve inverts, an economic recession in the US at least follows within a year or so.

Well, investors have been selling stocks and the stock market has dived.  But we still don’t have an inverted yield curve yet, partly because the Federal Reserve appears to have decided not to raise its policy rate so quickly any more – precisely because it does not want to provoke a recession when the world is slowing down.

The second indicator is the price of copper.  As copper enters much of the components of industrial output, its price can be a good short-term gauge of the strength of economic activity globally.  Well, the copper price is down from its peak in 2017 but still not at levels seen in the mini-recession of early 2016. 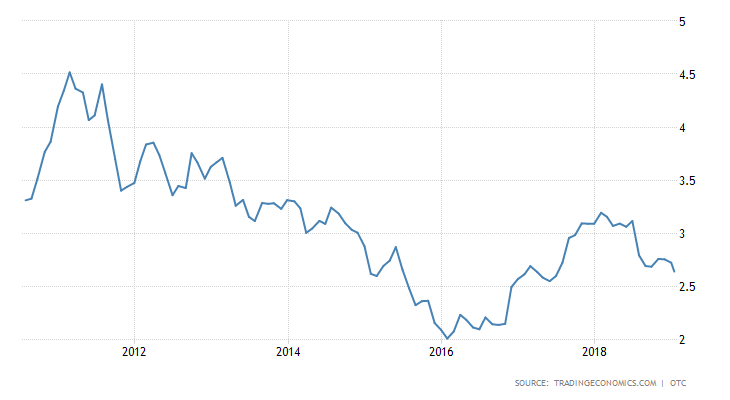 The most important indicator in my view is the movement of profits for the capitalist sector of the major economies.  This drives investment and employment and thus incomes and spending.  But it is not possible to get such a high frequency measure – indeed most profit reports are quarterly at best.  Goldman Sachs, the investment bankers have made some forecasts, however for this year.  Their economists conclude that “In terms of proﬁts, we do expect a sharp slowdown. In every region we expect proﬁt growth to be below the current bottom-up consensus, and to be around 5% in 2019. In the case of the US, in particular, this would represent a very sharp slowdown from the 22% EPS growth expected for 2018.”  They ‘benchmark’ this profit forecast against their measure of ‘growth momentum’ and find that it “implies a further sharp deterioration in growth.”  But not yet a recession forecast.

These indicators all suggest a sharp slowdown in global growth, particularly in manufacturing and industry.  The US yield curve is close to inversion but not yet inverted; the copper price is down but not yet at lows; and global profits growth has slowed but is not yet falling.  So the amber light for a global slump in 2019 has still not turned red – yet.

3 thoughts on “From amber to red?”