US Federal Reserve Chairman Jerome Powell spoke at the annual Jackson Hole symposium on Friday.  This annual symposium brings together all the top central bankers in the world who hear papers by mainstream economists on the issues and problems facing the major economies.  Powell was expected to deliver a speech in which he would appear cautious about the progress of the US economy.  He did not disappoint in his caution.

The Fed is still expected to raise its policy rate by another quarter point at its September meeting.  Indeed, it is projecting four hikes for this year, so the December meeting is also expected to be another when the Fed hikes again.  Earlier in the week President Trump  expressed his displeasure with the Fed and Powell, by name, saying he disagreed with the Fed’s interest-rate hiking because it could hurt the economy and vowed to keep criticizing the central bank until it stops.

At Jackson Hole, what did Powell think was the state of the US economy and what he would do with the Fed’s plan to raise interest rates this year and next?  He started by saying that “On the doorstep of the period now referred to as the Global Financial Crisis, surely few, if any, at that symposium would have imagined how shockingly different the next 15 years would be from the 15 years that preceded it.”  In other words, how wrong we were that the US capitalist economy could go on growing, the housing boom would continue and the credit-fuelled financial sector would keep on spiralling up.

But never mind, continued Powell, “over the course of a long recovery, the US economy has strengthened substantially”.  His ‘long recovery’ means a slow and weak one, something I have described better as a ‘long depression’.  But all is well now, because “there is good reason to expect that this strong performance will continue.”  And this justifies the decision of the Federal Bank to “gradually raise the federal funds rate from its crisis-era low near zero toward more normal level” and to end the policy of quantitative easing (buying government and corporate bonds by printing money),Powell reckoned that “this gradual process of normalization remains appropriate”.

So Powell reckons the ‘long depression’ (sorry, ‘recovery’) is over.  But he remains worried that the “US economy faces a number of longer-term structural challenges that are mostly beyond the reach of monetary policy. For example, real wages, particularly for medium- and low-income workers, have grown quite slowly in recent decades. Economic mobility in the United States has declined and is now lower than in most other advanced economies.  Addressing the federal budget deficit, which has long been on an unsustainable path, becomes increasingly important as a larger share of the population retires. Finally, it is difficult to say when or whether the economy will break out of its low-productivity mode of the past decade or more, as it must if incomes are to rise meaningfully over time.”  Hmm, so still a lot of problems for US capitalism to overcome and nothing much that the Fed can do about it.

Interestingly, then Powell discussed how accurate the Fed was in gauging whether the US economy was growing too fast (that might engender accelerating inflation and a squeeze on profits), or whether it was still growing too slowly (that hiking interest rates could actually push the economy back into a new recession, which would also hit profits).  He suggested that following the usual conventional ‘stars’, namely NAIRU, the natural rate of unemployment (when the economy is at full speed), or the natural rate of interest (where the cost of borrowing is about right) or some inflation target like 2% a year (the current Fed target) may not be of any use.

That’s because these natural rates for harmonious non-inflationary keep moving about!  “Navigating by the stars can sound straightforward. Guiding policy by the stars in practice, however, has been quite challenging of late because our best assessments of the location of the stars have been changing significantly.” The supposed strong relationship between economic growth and low unemployment (Okun’s law) seems to have shifted as the US economy crawls along at 2% while unemployment drops well below any previous estimates of NAIRU; or between falling unemployment and price inflation (the Phillips curve) as price inflation stays below the Fed Target although the official unemployment rate keeps dropping.

“Experience has revealed two realities about the relation between inflation and unemployment, and these bear directly on the two questions I started with. First, the stars are sometimes far from where we perceive them to be. In particular, we now know that the level of the unemployment rate relative to our real-time estimate of NAIRU (u*) will sometimes be a misleading indicator of the state of the economy or of future inflation. Second, the reverse also seems to be true: Inflation may no longer be the first or best indicator of a tight labor market and rising pressures on resource utilization.”

Inflation has not appeared in the ‘real economy’ but “destabilizing excesses appeared mainly in financial markets “ and so what is happening with debt or credit growth and the spiralling stock market may be more important indicators of whether the economy was about to ‘overheat’ and go bust.  Indeed…

So Powell concluded that moving interest rates up should be considered cautiously and even slowly, just in case: “when you are uncertain about the effects of your actions, you should move conservatively”.  However, in the next breath of his speech, he went on: “we have seen no clear sign of an acceleration (of inflation) above 2 percent, and there does not seem to be an elevated risk of overheating.”  So “further gradual increases in the target range for the federal funds rate will likely be appropriate.”

Having spent a large part of his speech saying that the usual mainstream economic indicators of the health of the economy were not helpful because “the stars” kept moving and that the inflation indicator was less important than any ‘bubble’ signs in the financial sector (as they were in the 2008 crash), he then goes back to the inflation target to argue that more rate rises are ok!

Well, are they ok?  I have raised before that a capitalist economy goes into a slump or recession when profitability (rate of profit) starts to fall and profits (total profits) slow to a crawl or fall.  A slump in investment will follow eventually.  If the level of debt (particularly corporate debt) is also high and interest rates rise to push up the cost of borrowing, then profits available for investment will be squeezed more, perhaps to breaking point.

The Fed started hiking rates in late 2016. So far, that has not triggered a downturn or slump.  That’s because there has also been a sharp reduction in corporate taxation and other subsidies to US companies from the Trump administration – and it also appeared that economic growth was picking up in rest of the world, particularly Europe and Japan.  However, that optimistic spiral upwards from a seeming trough in 2016 appears to have peaked as I suggested last April.  Economic growth in Europe (2%) and Japan (1%) is slowing again.  And so is China.

As I offered in a previous post, the price of industrial metals, particularly copper (because it is sensitive to global investment in raw materials) is a very good high frequency indicator of the state of the global economy.  The copper price started to fall back in June – not yet back to the ‘recession’ level of 2016, but on its way.

At the same time, corporate debt in the US is still rising, as it has been in most ‘emerging economies’. At $8.6 trillion, US corporate debt levels are 30% higher today than at their prior peak in September 2008.  At 45.3%, the ratio of corporate debt to GDP is at historic highs, having recently surpassed levels preceding the last two recessions. 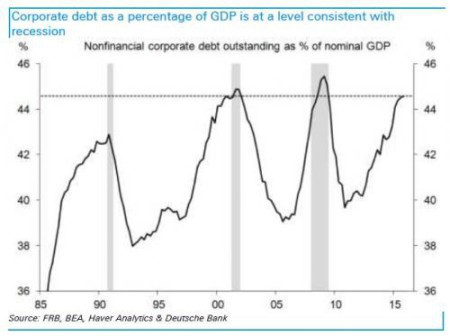 Rising interest rates, driven by the Fed, have already sparked serious emerging market debt and currency crises in Argentina and Turkey; and others are on the horizon.

And profits in the non-financial sector of the US have been falling while global corporate profits have slipped back into negative territory on my estimates (average of the top five economies). This is something not seen since 2015 which was followed by a near recession in 2016. 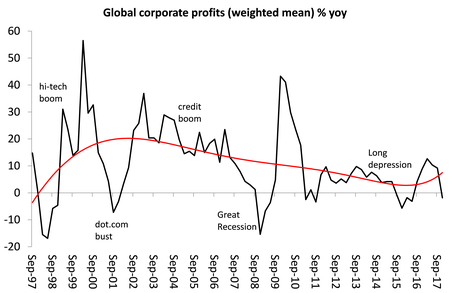 The US stock market jumped up after Powell’s speech because he seemed to be suggesting a relatively slow pace of interest rate hikes ahead.  The stock market reached an all-time high last week, fuelled by low interest rates, Trump’s tax cuts, but also by companies buying back their own shares to boost prices. This year companies have spent over $1trn buying shares.

Rather than invest in productive assets, the large companies have increased debt and spent their cash on financial assets (fictitious capital, Marx called it).  The build-up in US corporate debt threatens to squeeze profits further as interest rates rise and if wage growth does finally pick up.

One reliable signal for the start of a slump in the past has been the inversion of the bond yield curve.  As I explained in a previous post, the interest rate for borrowing money for one or two years is usually much lower than the rate for borrowing for ten years for obvious reasons (the lender gets paid back quicker).  So the yield curve between the ten-year rate and the two-year rate is normally positive (say 4% compared to 1%).

The general idea is that a steepening yield curve, where long rates are rising faster than short rates, indicates that credit is easy to access and profits are high enough from faster economic growth. But when short-term yields rise above the prevailing long-term bond rate it indicates credit conditions have become unusually restrictive compared to profits and that there is a very high probability that a recession will arrive within about a year.

RBC investment strategist, Jim Allworth reckons that: “There hasn’t been a recession in more than 60 years that wasn’t preceded by an inversion of the yield curve. On average, the yield curve has inverted 14 months prior to the onset of a recession (median 11 months). The shortest “early warning” was eight months. We are not there yet in the US and certainly nowhere near in Europe.  But the US curve is going in that direction.”  The gap between the 2-year yield and 10-year yield, is now at a very flat 22 basis points.

Powell, it seems, is not worried about an inversion of the yield curve. One financial analyst commented: “We know there’s a bunch of people who are saying this time it’s different,” said Sharif. “Yet they (the Fed) spent a good chunk of their July meeting listening to a staff presentation on whether their tool kit is sufficient if there’s another downturn. They’re kind of prepping their tool kit.”

The trouble is that the tool kit is pretty empty apart from reversing the current hiking of rates and going back to the failed policy of quantitative easing.

51 thoughts on “The Fed’s star-gazing”