President Trump has now moved on from steel tariffs (with exemptions for some allies) to the real battle: stopping China from gaining market share in America’s key industries: technology, pharma and other knowledge-based sectors. Can China make further inroads globally or will Trump’s policies stop them?

The first thing to note is where things are right now.  Economists at Goldman Sachs, the US investment bank, have looked at the data.  They find that “the US position as a global technological leader remains strong. The US’s economy-wide productivity remains high compared to other advanced economies, and its shares of global R&D, patents and IP royalties remain impressive.”  China has been catching up though, but in medium value-added goods sectors and hardly at all in knowledge-based tech.  So, while overall, the US share of global high-tech goods exports has declined as China’s share has grown, the US trade sector deficits have been concentrated in medium-high-tech goods rather than in the most advanced categories. Indeed, the US share of global knowledge-intensive service exports has held up, contributing to a rising trade surplus and higher employment in those sectors.

Take overall productivity, as measured by output per hour worked.  On this broad measure of the productivity of labour, the US remains ahead, even compared to other advanced economies in Europe and Japan.  China’s labour productivity level is just 20% of the US, although that is a quadrupling since 2000. 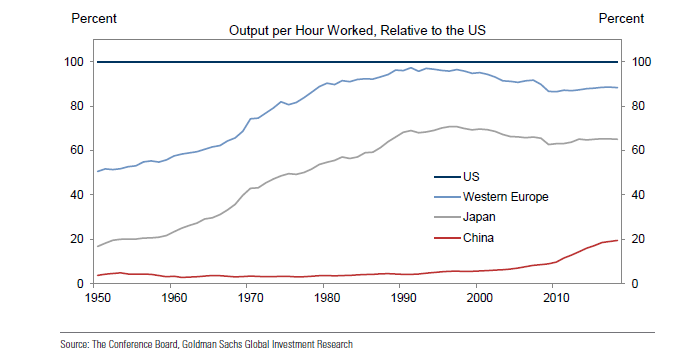 The US continues to invest a relatively large share of its GDP in research and development. While the US share of global R&D has declined, in part due to a rapid increase in China’s share, the US remains the global R&D leader, accounting for nearly 30% of the world total, about 1.5-2 times the US share of world GDP. 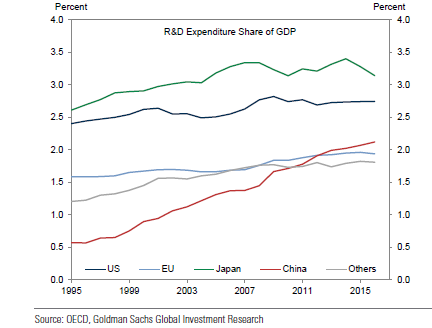 Total patents granted for new inventions show that the US share has held roughly steady at around 20%. China’s share of total patents granted has risen very rapidly over the last decade to over 20%, but most patents granted to Chinese innovators have come from its own domestic patent office, with far fewer granted abroad. The US share of the world total of royalties on intellectual property has declined somewhat as the EU’s has grown, but it remains very large. China’s share remains negligible.  That means US capital is still taking the lion’s share of global profits in technology.

The modern 21st century US economy relies increasingly on advanced knowledge and technology sectors for its growth.  The share of US GDP for these sectors is now 38%, the highest of any major economy. But China is not far behind with 35% of its GDP in these sectors, amazingly high for a ‘developing’ economy.

Where Trump is now concentrating his ire on China is on the share of hi-tech goods sales in world markets.  While the US is the largest producer of high-tech goods, its share of world exports has shrunk considerably while China’s share has grown.  This rising Chinese competition has caused US manufacturing firms to reduce their patent production, which has been accompanied by reduced global sales, profits, and employment.

But on the services side, the US is the largest global producer of commercial knowledge-intensive services and second only to the EU in exports. China’s share remains quite small.  If China gains market share in this area, it will really hurt US capital.

That’s because, although the US runs a deficit on trade in tech and knowledge industries, that deficit has shrunk from the early 2000s.  The US is more than holding its own in this area even since China joined the World Trade Organisation. Indeed, it runs a surplus in knowledge-intensive services, which has grown over the last decade.  It is this that Trump seeks to protect.

While jobs have been lost to technology replacing labour (capital-bias) and the shift of US industry to China in manufacturing, the employment share of hi-tech and knowledge sectors has risen to about one-third of all US jobs.  Trump claims to be restoring the ‘smoke-stack’ sectors where he won some votes, but in reality that battle for jobs is already lost, thanks to US industry shifting out.  The real battle is now over profits and jobs in the knowledge-based sectors where the US still rules.

But these sectors are highly concentrated in just a few firms, the technology leaders.  There are wide swathes of American industry, including tech, which benefits little from this US superiority.  Just five firms have over 60% of sales in biotechnology, pharma, software, internet and comms equipment.  The top five in each sector are taking the lion’s share of profits too.

What this shows is that, contrary to the mainstream economic idea that international ‘free trade’ will benefit all, the gains from trade are concentrated in just the leading firms which take advantage of network, scale, and experience and gain larger market share.  The rising industry concentration has in turn boosted their corporate profit margins.  As Goldman Sachs puts it: “global trade is particularly concentrated, with “export superstars” accounting for a very large share of exports in many industries and countries.”

Contrary to the Ricardian theory of comparative advantage, international trade is transacted by companies not countries and, as such, value (profit) gets transferred to those with technological advantage and they gain at the expense of others.  Trade represents a form of combined development, but capitalism delivers this unevenly.

As I argued in a previous post, over the last 30 years or so, the world capitalist economies had moved closer to ‘free trade’ with sharp reductions in tariffs, quotas and other restrictions – and many international trade deals.  But since the Great Recession and in the current Long Depression, globalisation has paused or even stopped.  World trade ‘openness’ (the share of world trade in global GDP) has been declining since the end of the Great Recession. 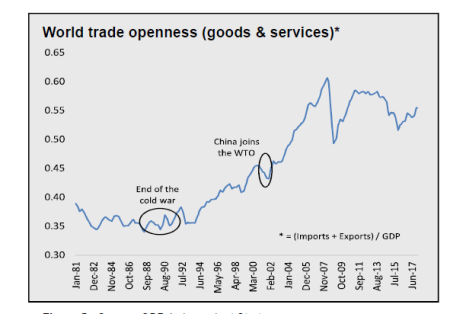 It is this decline in globalisation as world economic growth stays low and the profitability of capital remains squeezed that lies behind this new trade war.  Trump’s blundering blows on trade have an objective reason: to preserve US profits and capital in the key growing tech sectors of the world economy from the rising force of Chinese industry.  So far, the US is still holding a strong lead in hi-tech and intellectual property sectors, while China’s growth has been mainly in taking market share at home from American companies, not yet globally. But China is gaining.

12 thoughts on “Trump, trade and the tech war”