The British people are not stupid.  They know that neoliberal, neoclassical ‘free market’ economics does not work, even if they don’t use those terms.  In a survey by YouGov, the leading public opinion pollsters in the UK, more than two-thirds of those asked wanted the railways, the energy companies (gas, electricity) and the postal service (Royal Mail was recently privatised for a peppercorn price and is now controlled by American offshore hedge funds) renationalised. 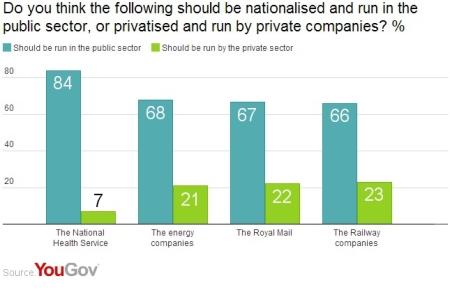 The questions were: “Do you think the government should have the power to control prices of the following things, or should prices be left to those selling the goods or service to decide?”; and “Do you think the following should be nationalised and run in the public sector, or privatised and run by private companies?”. 84% wanted to continue the taxpayer funded National Health Service and did not want to move to a private insurance system as in the US (Obama-care and all).  68% wanted the energy companies renationalised, 67% wanted the Royal Mail back in public ownership and 66% wanted the railways returned to state ownership and control. YouGov did not ask people whether they wanted the UK banks nationalised, but we can guess what the outcome would have been.

The other interesting result was that there was majority for public ownership across the political spectrum, with even 52% of Conservatives in favour and 78% of UKIP voters (UKIP is a far right ‘tea party’ type party that has been gaining support against the main parties). 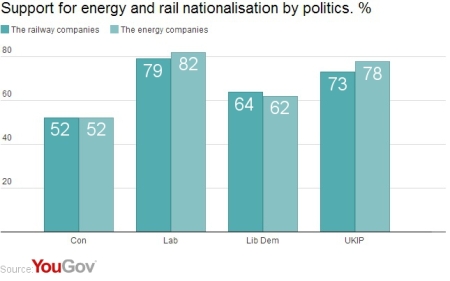 What was rather funny was that the City AM newspaper, the mouthpiece of ‘free market economics’ in London’s financial centre, the City of London, called these results “terrifying”.  City AM derided the British public’s position as “misguided”.  Have they not forgotten that under public ownership “the customer service … was pathetic, prices have been shooting up as a result of state-imposed green rules that the industry previously embraced and memories are very short, with nobody remembering how bad things were when industries were state monopolies. In public ownership, all spending would have to be done by taxpayers; consumers would be at the mercy of the energy monopoly; competition would end, and inefficiencies would increase drastically.”

This is a joke.  ‘Customer service’ is just as appalling, if not worse, under the aegis of these private energy and rail monopolies, which rack up huge profits, pay their executives millions in bonuses, engage in aggressive and illegal marketing, and apply confusing and continually changing energy rates and rail fares.  Inefficiency is huge with thousands of managers and accountants employed to relay and record prices and costs between companies on rail routes, with hugely expensive ‘regulators’ supposedly checking fares and prices and investment programmes and no accountability to the taxpayers.  Consumers are already at the ‘mercy ‘ of these private profit-maximising monopolies.   What makes this better than state-owned companies (especially with workers control) that taxpayers can control in the social interest?  Then decisions on ‘green’ charges and other environmental investments can be made transparently and directly according to public opinion.

The YouGov poll found that 45% of those asked also wanted the state to control private rents, against 43% who don’t;  it was 74-18 for energy prices and 72-19 for public transport, including Conservative voters.  There was even a sizeable 35% that wanted price controls on food and groceries!  Price controls are popular, which explains why the Labour opposition in the UK says it wants to introduce a energy price freeze if it becomes the government after 2015 elections.  City AM is apoplectic that allowing the state to ‘fix’ prices would mean “returning to  horrible, product-less, queue-based, rationed) shops that used to exist in the Soviet Union during the bad old days.”   You see, “artificially low prices have always caused shortages and a far greater crisis whenever they have been tried. The great lesson of economics is that bucking markets with artificial price controls always fails; far better to address the root causes of the problem – high prices usually imply scarcity, or monopoly, or generalised inflation – or help those who are suffering directly.”

According to City AM then, it would be wrong to control prices as this would distort the ‘free market’ and cause shortages.  It’s ironic that the current ‘free market’ in energy in the UK is doing just that. We now know that the huge price increases introduced by the energy companies are really determined by the energy-generating companies (often the same company as the energy retailers) that set the wholesale prices. The attempted closure of the Grangemouth oil refinery in Scotland by its American privateer owner is an example of where investment and pricing decisions are really made.

Several studies have shown that, with the decline in North Sea oil and gas, domestic energy supply is not going to match future demand and under the ‘free market’, there could well be power outages down the road.  The response of the government has been to announce a new nuclear power station to be built by a French-Chinese consortium and massively subsidised by the taxpayer over decades.  So much for the free market.  The ludicrous idea that competition and efficiently allocated resources can be introduced into ‘natural’ monopolies like energy, transport, land or water has been exposed precisely by the failure of privatisation in those sectors in the UK.  The British people can see that, but not apparently City AM.  Instead it parrots on about the need for “pro-consumer and pro-competition reforms”.

Yet even City AM recognises that railway privatisation in the UK has produced a “weird public-private mish-mash that characterises the industry, the subsidies, the lack of transparency and accountability (who is in charge? Network Rail? The train firm?), the awful service and the lack of choice.”  So much for ‘better customer services’ under privatisation then.

It claims that “state ownership was a disaster during the decades when it was tried.”  But that’s nonsense. The British people now pay the highest train fares in Europe, and yet taxpayers are still subsidising with billions to these private franchise firms that are not competing at all.  They have franchises for 15-25 years and are really monopolies. They can walk away from the routes they run just as they please if they don’t make profits.  And they have done so, forcing the government to run the routes under the direct control of the publicly-owned rail track company. And whenever the state took over the running of these franchises, they were more punctual, fares were clearer and profits went directly to the public purse. And yet the government quickly returned them to a new set of privateers.

So the British people are not stupid: they know the reality of privatisation.  Indeed in every poll, not just this YouGov one, they have expressed opposition to privatisations imposed by both Conservative and Labour governments in the neoliberal period.  So City AM is worried: “Supporters of a market economy have a very big problem. Unless they address the concerns of the public, they will be annihilated.”

If only that were true.  The Labour leadership is apparently toying with putting renationalisation of the railways in its manifesto for 2015 elections, but it has steadfastly refused to include nationalisation of the banks (although that is now official Trade Union Congress policy); or the energy companies, instead opting for the useless policy of price freezes, which indeed will distort investment and supply under a profit-based energy sector.  And they have refused to endorse the call to take back the Royal Mail into the public sector.  The British public knows what needs to be done: the Labour leaders are way behind them.

14 thoughts on “Oh dear! What are the British people thinking of?”