As the scandals in the banks globally mount up since the financial collapse of 2008-9 (see my post, https://thenextrecession.wordpress.com/2013/02/01/the-never-ending-banking-story/), with the latest being the Cyprus disaster (see my post, https://thenextrecession.wordpress.com/2013/04/11/cyprus-aphrodite-into-hell/), you’d think that at least the more radical elements of the economics profession would see the merits of taking into and keeping key banks in an economy in public or common ownership.  Then they could provide a proper public service for households and small businesses and provide financial support to any national plan for investment in infrastructure, the environment and jobs.

And yet there is little sign that most radical policies for reform of the financial sector would include public ownership.  Instead we are offered more effective regulation, tighter capital adequacy minimums, or divorcing speculative activities from retail banking, or breaking the banks up into smaller units so they are not ‘too big to fail’.  Take the position of leftist economist Yanis Varoufakis (http://yanisvaroufakis.eu/).  In a recent post on his blog (27 March), he explained his position on what to do about the Cypriot banks.  “I have noticed that a number of commentators have misunderstood my position on the Cyprus debacle and, more generally, on the question of how failed banks ought to be dealt with. As I made clear yesterday, I am all for bailing in the creditors, even the uninsured depositors, of failed banks. In fact I have been arguing this case for three years (see for example our Modest Proposal) so as to avoid the zombification of Europe’s financial system. BUT, I have also insisted that this must be accomplished centrally, by an ESM which, in collaboration with the ECB, takes equity in the failed banks, shrinks them appropriately, recapitalises the viable parts and then sells off the latter to private investors at a profit (TARP and Sweden circa 1992-like – my emphasis).

I have highlighted in bold that part of Varoufakis’ explanation. Even he sees no reason to keep the banks in public ownership once they have been cleaned up.  His solution is the ‘Swedish’ one, where banks were nationalised, cleaned up at taxpayer expense and then sold back to the private sector to recoup the public money – in Sweden’s case that deal broke even for the taxpayer. But why reprivatise these viable banks and return them to a new set of people set to commit the same disasters and scandals as the previous owners? Indeed, that is what happened in the financial collapse of 2008, with many banks in different countries owned by the state originally but sold off.

I am reminded of what Lenin said about public ownership of the banks in contrast (Nationalisation of the Banks, Lenin Collected Works, Progress Publishers, 1977, Moscow, Volume 25, pages 323-369): “The banks, as we know, are centres of modern economic life, the principal nerve centres of the whole capitalist economic system. To talk about “regulating economic life” and yet evade the question of the nationalisation of the banks means either betraying the most profound ignorance or deceiving the “common people” by florid words and grandiloquent promises with the deliberate intention of not fulfilling these promises.

It is absurd to control and regulate deliveries of grain, or the production and distribution of goods generally, without controlling and regulating bank operations. It is like trying to snatch at odd kopeks and closing one’s eyes to millions of rubles. Banks nowadays are so closely and intimately bound up with trade (in grain and everything else) and with industry that without “laying hands” on the banks nothing of any value, nothing “revolutionary-democratic”, can be accomplished.

What, then, is the significance of nationalisation of the banks?  It is that no effective control of any kind over the individual banks and their operations is possible (even if commercial secrecy, etc., were abolished) because it is impossible to keep track of the extremely complex, involved and wily tricks that are used in drawing up balance sheets. founding fictitious enterprises and subsidiaries, enlisting the services of figureheads, and so on, and so forth. Only by nationalising the banks can the state put itself in a position to know where and how, whence and when, millions and billions of rubles flow. And only control over the banks, over the centre, over the pivot and chief mechanism of capitalist circulation, would make it possible to organise real and not fictitious control over all economic life, over the production and distribution of staple goods, and organise that “regulation of economic life” which otherwise is inevitably doomed to remain a ministerial phrase designed to fool the common people. Only control over banking operations, provided they were concentrated in a single state bank, would make it possible, if certain other easily-practicable measures were adopted, to organise the effective collection of income tax in such a way as to prevent the concealment of property and incomes; for at present the income tax is very largely a fiction.

The advantages accruing to the whole people from nationalisation of the banks would be enormous. The availability of credit on easy terms for the small owners, for the peasants, would increase immensely. As to the state, it would for the first time be in a position first to review all the chief monetary operations, which would be unconcealed, then to control them, then to regulate economic life, and finally to obtain millions and billions for major state transactions, without paying the capitalist gentlemen sky-high “commissions” for their “services”.

This seems like an excellent summary of the benefits of public ownership of the banks, including stopping privately-owned banks from helping tax dodgers avoid tax and criminals launder money, apart from losing and stealing money themselves.

And would taking over the banks and keeping them in public ownership once they are viable and clean again be popular?  Well, a recent poll in the UK found that fewer than one in 10 voters would back a swift return of Royal Bank of Scotland to the private sector and more than three-quarters believe it should stay in public hands for the time being (according to a new YouGov poll).  This stands in direct opposition to the UK government’s plan to sell off its 82% stake in the bailed out RBS before the general election in May 2015, even though – on current prices – this would involve a loss of around £20bn.  Only 9% of respondents told YouGov they would favour “a sale in the near future” to recoup whatever money is available now. Some 44% favour holding on to the stake in the hope that the share price will eventually climb, while a large minority of 32% favour holding on to RBS “for the forseeable future” and running the Edinburgh-based institution “as a nationalised bank”. Together, that means 76% are against the option of early disposal – a crushing overall majority.

The views of the British public are eminently sensible.  In its latest Fiscal Monitor, the IMF calculated that around $1.7trn had been spent directly by taxpayers in the advanced economies to ‘bail out’ the banking sector in the financial crisis and so far only €914bn has been recovered through the sale of assets and other revenues collected from the bailed out banks. So 7% of 2012 global GDP has been used and only 3.7% of GDP has been recovered.  Indeed, only in the US is the taxpayer anywhere close to getting its money back (at 4.2% of GDP compared to a bailout of 4.8% of GDP spent).  In most other economies, the recovery rate is less than 25% after five years. 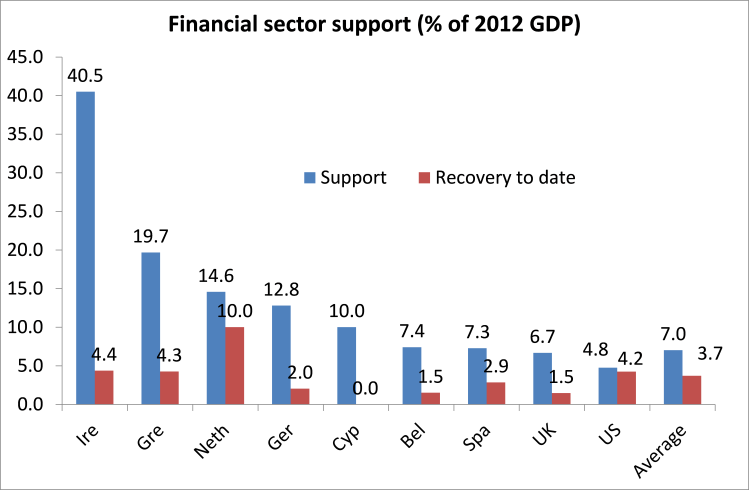 Most taxpayers are never likely to get their money back.  But governments are waiting for the first opportunity to sell the taxpayers stake in the banks, even if it is at a loss.  And, of course, the idea that the state should own and run these banks in the interests of the majority is an anathema.

11 thoughts on “Why sell back the viable banks?”