The international media that supports the strategists of capital have been delighted at the news of the death of Venezuela’s socialist president Hugo Chavez.  And they are now predicting the quick demise of Chavez’s government and political movement, either by defeat in the ensuing presidential elections or by some ‘popular’ uprising against his ‘autocratic’ and ‘dictatorial’ rule.  We’ll see.

The pro-capitalist media both inside and outside Venezuela has been unending in its claim that Chavez was a dictator and yet, as one commentator put it, “Every sin that Chávez was accused of committing—governing without accountability, marginalizing the opposition, appointing partisan supporters to the judiciary, dominating labor unions, professional organizations and civil society, corruption and using oil revenue to dispense patronage—flourished in a system the United States held up as exemplary.”

Over the last 14 years, Chávez submitted himself to fourteen national votes, winning thirteen of them by large margins, in polling deemed by Jimmy Carter to be “best in the world” out of the ninety-two elections that he has monitored. And in the last presidential ballot, which Chávez won with the same percentage he did his first election yet with a greatly expanded electorate,even his opponents have admitted that a majority of Venezuelans liked, if not adored, the man.  And why was that?

Well, we have to go back to before Chavez.  Venezuela’s economic fortunes are tied to world oil prices.  Petroleum prices began to fall in the mid-1980s.   Venezuela had grown lopsidedly urban, with 16 million of its 19 million citizens living in cities, well over half of them below the poverty line, many in extreme poverty. In Caracas, as in many other Latin American countries, poor people lived, cut off from municipal services.  The spark came in February 1989, when a recently inaugurated president who had run against the IMF said that he no choice but to submit to its dictates.  He announced a plan to abolish food and fuel subsidies, increase gas prices, privatize state industries and cut spending on health care and education.  That’s when opposition to the rule of Venezuela’s rich, in league with American imperialism and the IMF, began.

When Chavez finally came to power he promised broad reforms, constitutional change and nationalization of key industries under his so-called Bolivarian Revolution.  In some ways (but not all!) that was no more than even right-wing governments had done.  After all, a real vicious dictator, General Pinochet of Chile, who led a coup to overthrow the democratically elected President Allende with the backing of the CIA back in 1973 that led to thousands of deaths and ‘disappearences’ had also presided over the nationalisation of Chile’s key asset, the copper mines – and they remain nationalised to this day.  Like the PDVA, the state oil company in Venezuela, Chile’s Codelco is a major contributor to the government coffers.  Codelco pays income tax, all dividends go to the government and it also pays a 10% tax on the export value of copper products.

Venezuela, rich in natural resources and with one of the largest oil and mineral reserves in Latin America and the Caribbean, is also a country with huge potential to reach sustainable economic and social development.  Chavez’s programmes, aimed at helping the poor, included free health care, subsidised food and land reform.  This succeeded in decreasing poverty levels by 30% between 1995 and 2005, mostly due to an increase in the real per capita income.  Extreme poverty diminished from 32% to 19% of the population.

A recent IMF report (http://www.imf.org/external/pubs/cat/longres.aspx?sk=40024) showed that the gini coefficient (a measure of inequality of income between the top and bottom income earners) in the US had jumped from 30.5% in 1980 to 38.6% in 2010, the largest rise in the whole world with the exception of one country, China, where it has risen from a relatively low 28% to a very high 42% during ‘the move towards the market’ in China over the last 30 years.  The most equal society in the advanced capitalist world is Norway (24%), which is also the richest.  All the Scandinavian ratios are relatively low while Germany and France are  in the middle (low 30%).  Only the UK at 33.5% is close to the US – the rise since 1980 in the UK has matched that of the US, making it the most unequal society in Western Europe!

But there was one country that has become more equal over the last 20 years – Venezuela.  And all that improvement was under the presidency of Chavez, with the gini coefficient falling from 45.4% in 2005 to 36.3% now.  Venezuela is now the fairest country in Latin America on this measure. Brazil maintains its status as the most unequal, while South Africa with a hugely rich tiny white minority has the infamous status of being the most unequal country in the world (63%).

Oil gives Venezuela a competitive advantage in international trade. But it also throws the domestic economy off balance, as it accounts for more than 30% of the gross domestic product (GDP), approximately 90% of exports and 50% of fiscal income. When Chavez first came to power, the price of oil was less than $20 a barrel; by 2006, it was more than $60 and rising. Chávez was able to pour money into social programmes and engage in a burst of petrodiplomacy – subsidising like-minded governments not only in Cuba but also Bolivia and Nicaragua.   Even many poor Americans benefited from aid from Venezuela.  When the US Congress decided to cut 25% from the Low Income Home Energy Assistance Program, Citgo Petroleum Corporation, a subsidiary of Venezuela’s state-owned oil company, said that it would be continuing its six-year-old program of providing heating oil to poor Americans free of charge.

What does the future hold for Chavismo?  Any new government will be desperate to sustain revenue and to see oil prices remain as high as possible. The power to achieve that, however, lies elsewhere and in economic terms Venezuela is a price taker. It must deal at whatever price the market sets and in the end that means relying on the Saudis to maintain Opec discipline.

Venezuela’s relative isolation has meant that the currency, the bolivar, had to be devalued in order to sustain dollar-based oil exports.  More dollar revenues had a price, inflation spiralled, way more than in other Latin American countries (see the  graphic below of inflation since 1999).  That hit the savings of the middle-class, in particular.  As a result, significant opposition to Chavismo has been maintained, even among relatively lower middle-class strata.  And in the last couple of years, oil revenues began to mark time, forcing Chavez to cut back on government spending and devalue even more.  As a result, living standards stopped rising and social problems (especially crime) began to erupt. 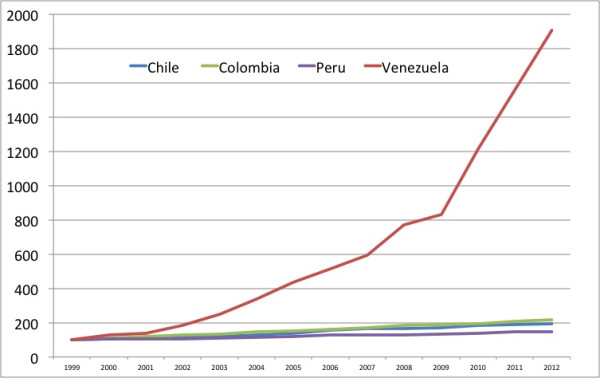 Also, investment in extracting the massive oil reserves has been lacking, partly because foreign investment and expertise have been absent.  This is the blackmail card that international capital has to play.  ‘We shall invest, if you end Chavismo’ and return to being a compliant oil producer for American energy needs (Venezuela is America’s biggest provider of foreign oil).  It remains to be seen how the Vice-President Maduro and the Chavistas deal with this blackmail.  We can only hope that the spirit and determination of Hugo Chavez will prevail.

15 thoughts on “The end of Chavismo?”