During the year of the COVID, output, investment and employment in nearly all the economies of the world plummeted, as lockdowns, social isolation and collapsing international trade contracted output and spending.  And yet the opposite was the case for the stock and bond markets of the major economies.  The US stock market indexes (along with others) ended 2020 at all-time highs.  After the initial shock of the COVID pandemic and the ensuing lockdowns, when the US stock market indexes plunged by 40%, markets then made a dramatic recovery, eventually surpassing pre-pandemic levels. 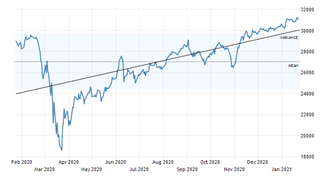 It is clear why this happened.  It was the injection of credit money into economies. The Federal Reserve and other major banks injected huge quantities of cash/credit into the banking system and even directly into corporations through the purchase of government bonds from the banks and corporate bonds; as well as through direct government-backed COVID loans to businesses.  Interest rates on this credit fell towards zero and, with so-called ‘safe assets’ like government bonds, interest rates even went negative.  Bond purchasers were paying governments interest in order to buy their paper!

Much of this credit largesse was not used to keep staff in pay and employment or to sustain corporate operations.  Instead, the loans have been used as very cheap or near zero-cost borrowing to speculate in financial assets.  What is called ‘margin debt’ measures how much of stock market purchases have been made by borrowing.  The latest margin debt level is up 7.7% month-over-month and is at a record high.

Marx called financial assets, stocks and bonds, ‘fictitious capital’.  Engels first composed this term in his early economic work, the Umrisse; and Marx developed it further in Capital Volume 3 (Chapters 25 and 29), where he defined it as the accumulated claims or legal titles, to future earnings in capitalist production; in other words, claims on ‘real’ capital, ie capital actually invested in physical means of production and workers; or money capital, cash funds being held. A company raises funds for investment etc by issuing stocks and/or bonds. The owners of the shares or bonds then have a claim on the future earnings of the company. There is a ‘secondary’ market for these claims, ie buying and selling these existing shares or bonds; a market for the circulation of these property rights.

Stocks and bonds do not function as real capital; they are merely a claim on future profits, so “the capital-value of such paper is…wholly illusory… The paper serves as title of ownership which represents this capital.” As Marx put it: “While the stocks of railways, mines, navigation companies, and the like, represent actual capital, namely, the capital invested and functioning in such enterprises, or the amount of money advanced by the stockholders for the purpose of being used as capital in such enterprises…; this capital does not exist twice, once as the capital-value of titles of ownership (stocks) on the one hand and on the other hand as the actual capital invested, or to be invested, in those enterprises.” The capital “exists only in the latter form“, while the stock or share “is merely a title of ownership to a corresponding portion of the surplus-value to be realised by it”.

Investors (speculators) in financial markets buy and sell these financial assets, driving prices up and down.  If cash (liquidity) is flush, share and bond prices can rocket, while banks and financial institutions invent ever new financial ‘instruments’ to invest in.  As Marx put it: “With the development of interest-bearing capital and the credit system, all capital seems to double itself, and sometimes treble itself, by the various modes in which the same capital, or perhaps even the same claim on a debt, appears in different forms in different hands. The greater portion of this ‘money-capital’ is purely fictitious.”

The central banks become key drivers of any financial asset boom  Again, as Marx put it some 150 years ago, “Inasmuch as the Bank issues notes that are not backed by the metal reserve in its vaults, it creates tokens of value that are not only means of circulation, but also forms additional – even if fictitious – capital for it to the nominal value of these fiduciary notes, and this extra capital yields it an extra profit.”  The creation or ‘printing’ of money by central banks provides the liquidity for speculation in the stock and bond markets – as we have seen in the year of the COVID.

Marx reckoned that what drives stock market prices is the difference between interest rates and the overall rate of profit. As profitability fel in 2020, what kept stock market prices rising was the very low level of long-term interest rates, deliberately engendered by central banks like the Federal Reserve around the world.  ‘Quantitative easing’ (buying financial assets with credit injections), has doubled and tripled in this year of the COVID.  So the gap between returns on investing in the stock market and the cost of borrowing has been maintained.

But here is the rub.  The share price of a company must eventually bear some relation to the profits made or the profits likely to be made over a period of time. Investors measure the value of a company by the share price divided by annual profits. If you add up all the shares issued by a company and multiply it by the share price, you get the ‘market capitalisation’ of the company — in other words what the market thinks the company is worth.  This ‘market cap’ can be ten, 20, 30 or even more times annual earnings.  If a company’s market cap is 20 times earnings and you bought its shares, you assume that you would have to wait to reap 20 years of profits in dividends to match the price of your investment.

You can see from this (CAPE Shiller) graph below that, as long term interest rates have fallen, the market cap price of corporate shares relative to profits (earnings) has risen.  Currently, it is at levels only surpassed in 1929 and during the dot.com boom of 2000. 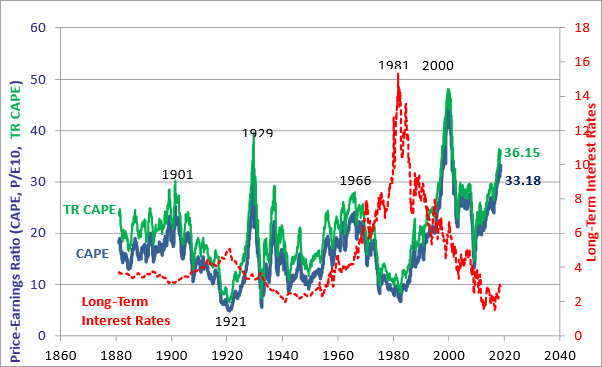 If profits drive the share prices of companies, then we would expect that, when the rate of profit in capitalism rises or falls, so would stock prices. To measure that, we can get a sort of average price of all the company shares on a stock market by using a basket of share prices from a range of companies and index it. That gives us a stock market index.

So does the stock market price index move up and down with the rate of profit under capitalism? The answer is that it does, over the longer term — namely over the length of the profit cycle, but that can be as long as 15-20 years.  In the shorter term, the stock market cycle does not necessarily coincide with the profit cycle.  Indeed, financial markets can reach extreme price levels relative to the underlying profits being engendered in an economy.

The most popular way of gauging how far the stock market is out of line with the real economy and profits in productive investment is by measuring the market capitalisation of companies against the accumulated real assets that companies have. This measure is called Tobin’s Q named after the leftist economist, James Tobin. It takes the ‘market capitalisation’ of the companies in the stock market (say, of the top 500 companies in what is called the S&P-500 index) and divides that by the replacement value of tangible assets accumulated by those companies. The replacement value is the price that companies would have to pay to replace all the tangible (and ‘intangible’?) assets that they own (plant, equipment, software etc). 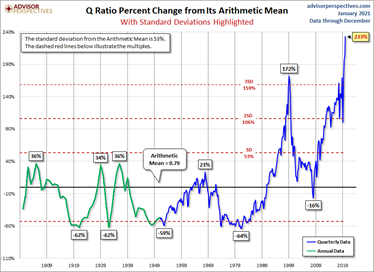 Another useful measure of the value of the stock market relative to the real economy is the Buffett index.  Named after famed billionaire financial investor who uses this index as his guide, it measures the money value of all stocks and shares against the current national output in the real economy (GDP).  Again, this shows that in the year of the COVID, the stock market has reached record high relative to the ‘real economy’. 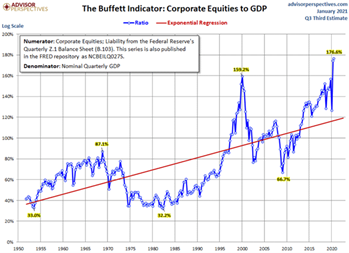 Indeed, financial speculators remain in total ‘euphoria’ as they continue to expect central banks to plough yet more loans and cash into the banks and institutions, along with a likely subsidence of the COVID pandemic in 2021 as vaccinations are distributed.  The belief is that corporate earnings will recover sharply to justify the current record highs in stock prices.

Citi Research has a “Euphoria/Panic” index that combines a bunch of market mood indicators. Since 1987, the market has typically topped out when this index approached the Euphoria line. The two exceptions were in the turn-of-the-century technology boom, when it spent about three years in the euphoric zone, and right now. 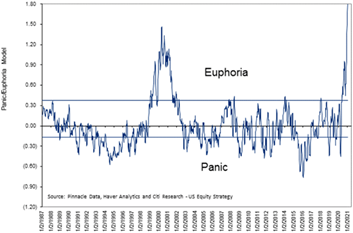 This ‘euphoria’ index complements the views of the world’s most powerful investment bank, Goldman Sachs. Their experts forecast another 15% rise in the US stock market in 2021. 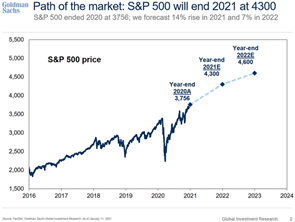 But as Marx explained, eventually investment in financial assets will have to come into line with earnings in the real economy.  In the year of the COVID, profits in most corporations plunged by 25-30%.

Goldmans and other investor speculators seem convinced that profits will bounce back this year, to make sure that the price of fictitious capital does not turn out to be fictitious. But that seems unlikely.  COVID-19 is not yet over and the vaccination distribution will take well into this year to reach levels of necessary so-called ‘herd immunity’, and that assumes the vaccines can also deal with the new COVID variants.

Most companies lost money in 2020.  And there is a swathe of businesses, mostly outside the top 500, but not entirely, which are in deep trouble.  Earnings are low or negative and even with the cost of borrowing near zero, these ‘zombie’ companies are not earning enough to cover even the interest on existing and new loans.  These ‘financially challenged’ zombies constitute about 20% of companies in most economies. 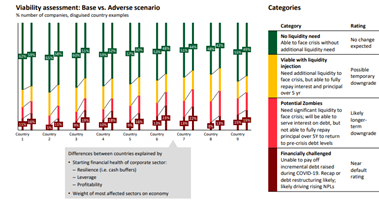 Even before the pandemic, the zombie companies were contributing to a significant slowdown in corporate investment levels. With so many companies in trouble, there is little prospect of a huge jump back in investment and earnings this year.

Central banks will go on providing yet more ‘liquidity’ for banks and corporations to speculate in financial markets. So fictitious capital will continue to expand – after all, as Engels first said, speculating in financial markets is a major counteracting factor to falling profitability in the ‘real economy’.

But all good things must come to an end.  Probably in the second half of 2021, governments will attempt to rein in their fiscal spending and central banks will slow the pace of their largesse.  Then the extreme levels of stock and bond prices relative to earnings and tangible capital are likely to reverse, like a yo-yo does when the string is pulled back to the reality of being fixed to a holder (real capital).

21 thoughts on “Covid and fictitious capital”