This time last year, I started my post on the forecast for 2020 by making a distinction between predictions and forecasts.  I argued that we can make predictions that can be tested, say about the climate and global warming.  Climate scientists predict that if carbon emissions keep rising, then global temperatures will keep rising and eventually cause damaging changes in the earth’s climate (and it is happening). Indeed, virologists have been predicting for some time that there would be a wave of pandemics from new pathogens reaching humans.

Similarly, in social sciences, we can make predictions, if with more difficulty. In Marxist economics we can make predictions from Marx’s law of accumulation of capital and from the law of tendency of the rate of profit to fall. The first law argues that the organic composition of capital will rise over time (and it does in capitalist economies); and the second law predicts that the average rate of profit on the stock of capital invested by capitalists will fall over time (and it does).

But that’s not the same as making forecasts on what will happen, say, over the next year.  Weather forecasting is unpredictable; although the three-day forecast has got pretty good.  In economics, forecasting whether an economy’s real GDP growth, employment, incomes and investment will rise or fall and by how much one year ahead is even more unreliable.

However, each year I attempt to do this for the major economies.  Last year, I tentatively forecast that the major capitalist economies were heading for a new slump in production and investment for the first time since the end of the Great Recession.  The period from mid-2009 to the end of 2019 was the longest period of expansion for the advanced capitalist economies since 1945 (although several large so-called ‘emerging economies’ like Mexico, Argentina, Brazil and Russia were already in recession and so was Japan). But it was also the weakest post-war expansion, with average real GDP growth no higher than about 2% a year, investment stagnating and profits beginning to fall. That was my argument for an impending slump in 2020.

Of course, we could predict a pandemic was coming but not forecast when and where COVID-19 would emerge.  The COVID pandemic put all previous forecasts out of the window.  Now ,as we look back at 2020, the world capitalist economy has recorded the biggest and widest slump in its history, with near 95% of economies suffering a contraction in national output, investment, employment, and trade. 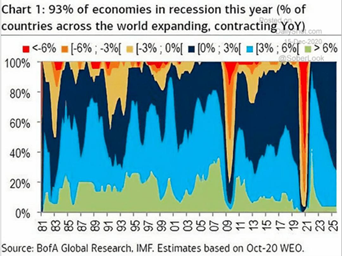 Very few countries have avoided a slump in 2020, specifically, China, Vietnam, Taiwan – and that’s about it.

In one way, as a result, making an economic forecast for 2021 has been made easier.  Most countries will recover this year.  Real GDPs will grow, unemployment rates will start to decline and consumer spending will pick up. That’s partly just stats.  If an economy drops 10% from, say 100 to 90 in one year, and then recovers to 95 in the next year, that’s a 5.5% rise.  But, of course, the economy is still some 5% below the pre-slump level of 100.  Moreover, if the economy had not entered a slump, it may have risen by say another 2-3% in a year, so even after the recovery, that economy could be some 6-7% below trend.

And that is what is going to happen in most economies in 2021. With the vaccines (gradually) being distributed, by the summer large numbers of people will be ‘protected’ from the virus (in all its variants?) – although countries in the ‘global south’ don’t have the financial and logistical resources to vaccinate their populations who may have to wait until 2024!  Nevertheless, the G7 economies should be recovering significantly by mid-year, at least on the stats.

But this will be no V-shaped recovery, which means a return to previous levels of national output, employment and investment.  As I have just argued above, by the end of 2021, most major economies (China excepted) will still have levels of output etc below that at the beginning of 2020.  Indeed, most forecasts by the likes of the IMF, World Bank and the OECD (as I have recorded in previous posts) do not expect the major economies to return to pre-COVID levels before the end of 2022 and many will never catch up to the previous trend growth (which was already weak). That’s why I call the shape of this global ‘recovery’ a reverse square root, where the new trend growth in output, investment and profitability will remain below the previous trend growth rate.

Why?  Well, there are three main reasons.  First, there has been ‘permanent scarring’ to most capitalist economies.  During the lockdowns of 2020, many companies, especially smaller ones in the services sector, will not return and the jobs that go with them will disappear.  Also, many workers who have been furloughed or sacked may not get their jobs back as companies look to reduce staff and not re-employ older, more expensive workers.

Second, there is the rise in corporate debt that will weigh down on the ability of many companies (and not just small ones) to resume investment.  Previous posts have talked about the rise of ‘zombie companies’ in the major economies. With interest rates driven down to the level of inflation and below by the huge injections of credit money by the main central banks, and with government guaranteed credit programmes, companies have sharply increased their debt levels during the COVID pandemic lockdowns.  The large companies have hoarded the government-backed money or invested it in buying back their own shares or in financial assets. The stock markets of many countries have rocketed to all-time highs as a result.  However, many smaller companies have had to use extra borrowing to survive.  The costs of servicing their debt has plummeted but the amount of debt has spiralled.

Indeed, there is a real risk of a third leg in the pandemic slump.  The slump started with what we could call a ‘supply shock’, as businesses closed, travel stopped, people stayed at home and service sector industries were paralysed. Then it became a ‘demand shock’ as spending on services, leisure, travel and other ‘unnecessaries’ plummeted.  Incomes for the better paid professional and office-based workers who could work from home stayed up while lower paid, unskilled workers who had to go out to work saw their jobs disappear.  Up to 40 per cent of those in the top income brackets of the major economies were able to work from home during the pandemic, more than double the proportion among the lowest earners.  The former did not spend so savings rates have rocketed. 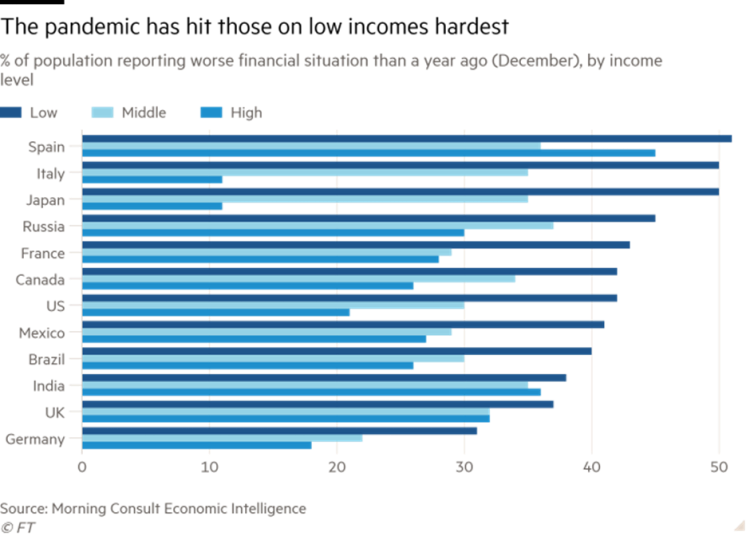 Now if there is a significant layer of companies that go bust (and bankruptcies are rising), then there could be a third leg to the slump in 2021: a credit crunch and financial crisis.  Such fears have been expressed by World Bank chief economist, Carmen Reinhart, about emerging market debt defaults (we already have had some); Reinhart warned that the global south faces “an unprecedented wave of debt crises and restructurings”. Reinhart said: “in terms of the coverage, of which countries will be engulfed, we are at levels not seen even in the 1930s.”

And the so-called Group of Thirty bankers issued a report recently that warned of such a crunch and urged immediate action to avoid it.  They warned that “while illiquidity has characterized the Covid-19 economic crisis heretofore, insolvency may come to bear on many businesses as economic strain from the pandemic continues.”  Even cheap credit is not enough to enable the ‘zombie’ companies to recover.  Zombie firms are sitting on an unprecedented $2 trillion of obligations. 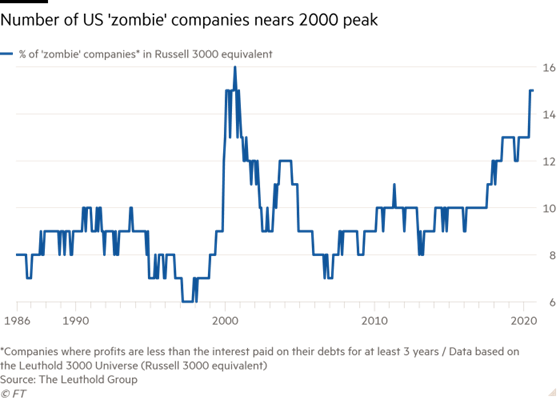 And that leads to the third reason not to expect a V-shaped recovery that puts global capitalism back on sustained growth. The average profitability of capital in the major economies is at post-war lows, compounded by the pandemic slump.

Unless the slump sufficiently ‘destroys’ enough ‘dead wood’ in the capitalist sector and then allows the strong to replace the weak and boost the profitability of the survivors, the major capitalist economies may stay locked in what has been called ‘secular stagnation’ by Keynesians or a ‘long depression’ by me and some other Marxist economists. 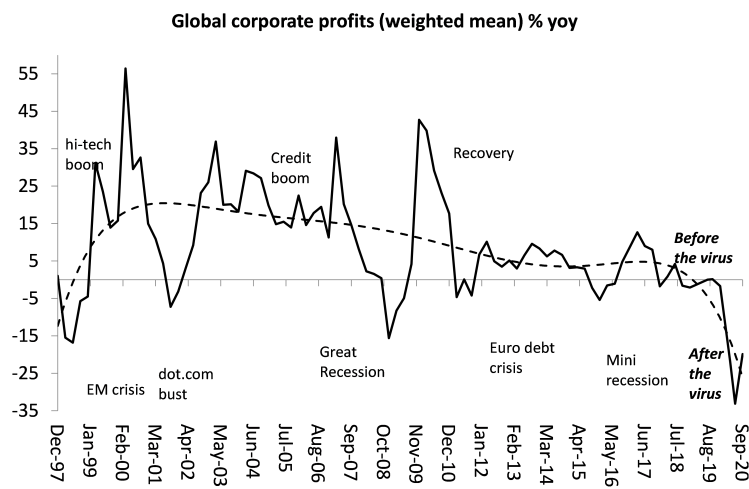 There remain some optimistic voices for 2021 among mainstream economists, as there were at the start of the pandemic last March. Let me remind what some prominent Keynesians said back then. Larry Summers, former Treasury Secretary under Clinton, reckoned that the lockdown slump was just the same as businesses in summer tourist places closing down for the winter. As soon as summer comes along, he said, they all open up and are ready to go just as before. The pandemic is thus just a seasonal thing. Similarly, Keynesian guru, Paul Krugman reckoned that the pandemic slump was not an economic crisis but “a disaster relief situation”.  So government spending financed by borrowing would soon put the economy back on its feet. And Robert Reich, the supposedly leftist former Labour Secretary, again under Clinton, also reckoned that the crisis wasn’t economic, but a health crisis and as soon as the health problem was contained (he thought last summer!) the economy would ‘snap back’.

Now the Financial Times has pitched in with its New Year message of hope and recovery.  Its economics columnist, Martin Sandbu, argues that 2021 will bring a massive consumer boom as pent-up demand will be released, backed by the high saving built up in 2020 that will now be spent.  He likens 2021 to the start of a decade of boom similar to the ‘roaring twenties‘ of the last century.  The problem with this forecast is that: first, for many countries, the 1920s were not roaring at all.  The UK had a long depression in growth, investment and employment in that decade, while Europe and Japan were in desperate straits, setting the climate for the rise of militarism and fascism.

And second, although there was a boom in the US economy in the 1920s after the end of the Spanish flu epidemic, it did not benefit the bulk of working people.  Economic growth accelerated for a few years and the stock market shot to new highs (just as now), buoyed by cheap credit.  But while real wages did rise for a while, by about 5-8% over six years (hardly mega), profit rises were much higher as productivity growth outstripped workers wage growth.  Inequality rose sharply.

And of course, it all ended in tears, with the Great Crash in the stock market of 1929-30 and the ensuing Great Depression of the 1930s.  Sandbu nevertheless urges us to hope. “A century ago, the decade ended badly. We can do better this time — not by reining in the hedonistic release but to make it inclusive. When it is finally time to celebrate, let everyone come to the party.”

The FT concludes that “If there is one reason above all for hope for the future it is that the past year has demonstrated, firmly, our ability to adapt.”  Really?  Has capitalism adapted or changed?  The tremendous efforts of scientists and health workers everywhere have kept down the deaths and illnesses of those infected by COVID-19 and the vaccines have been produced in record time. But the capitalist economy is unchanged.

The big pharma companies are set to make huge profits from the vaccine sales; the fossil fuel companies are continuing to expand their explorations and production.  Companies everywhere are out to reduce jobs and conditions for workers.  And governments are talking of having to tighten belts on spending and taxation once the pandemic subsides in order to pay for the huge fiscal and monetary spending of the last year.  Global warming is resuming, inequality of wealth and income is unchanged and poverty in global south is worsening, while stock markets boom.  That’s the prospect for 2021.