Last week, the Conservative Chancellor (finance minister) Rishi Sunak in the UK presented a plan to support businesses and workers as Britain emerges from the pandemic lockdown.  The financial support for workers ‘furloughed’ by their employers is being ratcheted down by the government to zero by end October.  After that, workers and employers are on their own.  But not quite.

Ex-hedge fund manager and multi-millionaire Sunak announced that the government would pay up to £1000 for each furloughed worker taken back on after October and other incentive measures and subsidies to encourage employers to employ, workers to work, and households to spend – to the tune of £30bn.  Added to approximately £160bn already pledged in the form of loans and grants to firms and higher welfare benefits and credits to workers, this makes close to a fiscal injection of £190bn, or about 8% of 2019 GDP.  Along with the fall in tax revenues and the rise in welfare benefits, the UK government budget deficit will be about £350bn in 2020, or 18% of GDP. 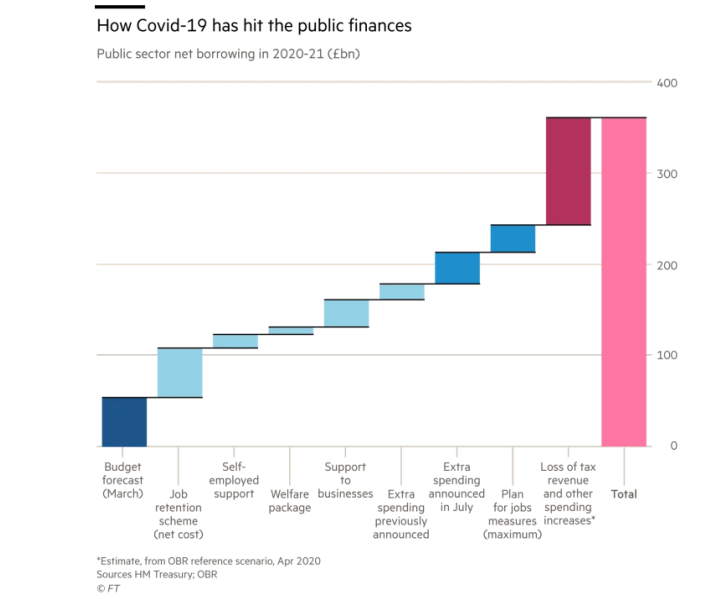 The latest measures are really designed to wean workers and businesses off government ‘furlough’ subsidies that have paid up to 80% of the wages for nine million workers sent home. By end-October, these payments will go and be replaced by a one-off payment to employers of £1000 for every worker re-employed before end-January.

At the same time, the government is offering employers funds to take on young people on six month contracts, more money for job centres and local authorities; a cut in sales tax for the leisure industry and a £10 voucher to reduce prices in cafes and restaurants.

The measures are designed to get people back to work and for businesses to resume as before.  So all this funding is just temporary.  It all runs out at the end of January, by which time the government hopes the COVID virus and the lockdowns will just be a bad nightmare and everybody can wake up to a new bright 2021.

But none of the measures can have any lasting impact on achieving sustained recovery. They are mainly directed to persuade employers in leisure industries with nothing for other sectors.  And they rely on private businesses to make decisions about re-employing their laid off workers.  There is no state jobs project and a limited investment programme. The Job Retention Bonus hardly meets the average wage costs of employers.

Tony Wilson, director of the Institute for Employment Studies, said the value of the kickstart subsidy was a third lower than that offered under the Future Jobs Fund introduced by Gordon Brown’s Labour government after the 2008 financial crisis, but was intended to create four times as many jobs. The City and Guilds Group, which works with education providers and businesses on skills development, said the kickstart scheme would only help tackle long-term unemployment if young people emerged with skills and a qualification that would help them secure a permanent job. Kirstie Donnelly, chief executive, said: “If this is not the case it’s just a sticking plaster solution, or even a ‘revolving door’ back to the unemployment queue.”

The Eat Out vouchers are an ironic joke, given that the government was forced, kicking and screaming, to maintain vouchers for school meals during the pandemic, but now wants to pay £10 for meals in restaurants at a higher cost.

In a ‘photo opportunity’ for the £10 meal vouchers, the Chancellor Sunak serves food – without a mask!

There is an extra £15bn for personal protection equipment (PPE) for health and care staff.  This a huge bill that will deliver too late for most workers and just confirms that the government had run down stocks before the pandemic to save money – now they have the benefit of hindsight, but with no benefit to health workers.  Meanwhile the extra funding for local authorities falls well short of the cost that the councils have incurred in the last three months, so a whole round of cuts and job losses are now being imposed by councils.

Then there is the grotesque decision to raise the stamp duty threshold on house purchases.  The Chancellor, who apparently owns seven luxury homes, will be a beneficiary, along with buy to let landlords.  But the average first-time buyer already pays no stamp duty in all regions and nations except London and therefore won’t benefit.  And anyway, why is the government trying to boost house prices in this crisis?  Indeed, the huge loss of tax on this could have been better used to build new affordable homes, given the dire shortage of good housing in Britain.  Indeed the new investment on housing and infrastructure announced is not ‘new’ at all, but simply previous plans just accelerated.

Len McCluskey, general secretary of Unite, the union, said the cut in stamp duty might well please “the better off with little to fear from this crisis”, but it was “no use to the tens of thousands of workers who have lost their jobs in recent weeks and the millions more we fear could follow them”.

Frances O’Grady, general secretary of the Trades Union Congress, the unions’ umbrella body, said the government needed to do far more to stem the “rising tide” of redundancies. She called for extra investment in jobs across public services — including the 200,000 vacancies in the NHS and social care. “And if the chancellor wants people to have the confidence to eat out, he should have announced a pay rise for hard-pressed key workers rather than dining out discounts for the well-off,” she said.

The damage of the three-month lockdown and the continued level of new infections has scarred the economy permanently.  Many people are now unwilling to go back to work, travel on public transport or go to cafes and restaurants, gyms etc where the risk of infection remains high.

The prospect of a V-shape recovery from the pandemic that the government prays for does not look likely. The UK economy is going to contract this year by the largest margin in 100 years.

And government borrowing and debt will hit historic highs by the end of 2020.

This debt would be manageable, given current low interest rates, if the UK economy were set to bounce back in 2021.  But British businesses do not expect that to happen – instead they are getting ready to sack staff and hold back on spending.  British consumers are not racing to the shops either.

The worst is yet to come on jobs, incomes and public services, as companies in all sectors announce redundancies and local authorities the same.  And as businesses go bust, the burden of unpaid loans for the banks will rise.

The underlying weakness in British capitalism has been exposed by the pandemic.  Even before the lockdown, economic growth was grinding to a halt, business investment was falling, and corporate profitability had never been lower since records began. 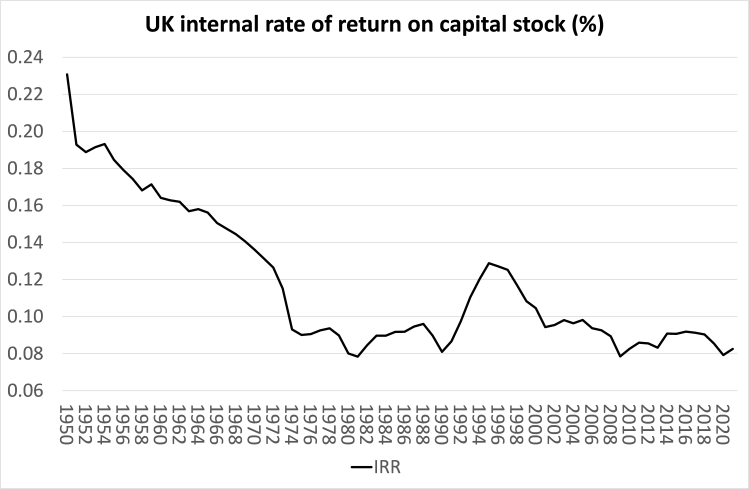 Profitability and investment will reach new lows during 2020.  And Britain has a history of slow and weak recoveries from slumps.

But this government does not want to take the lead in investing for recovery. It wants the market and capitalist companies to do that.  That is its ideology and that will be the cause of its failure to make its wish for a V-shaped recovery come true.

7 thoughts on “UK: wishing for a V-shape”