This review of a new book is in two parts as there is much to say. Here is the first part.

‘Trade wars are class wars‘ is the title of a new book by Matthew Klein and Michael Pettis. Matthew C. Klein is the Economics Commentator at Barron’s. He has previously written for the Financial Times, Bloomberg View, and the Economist.  Michael Pettis is professor of finance at Peking University’s Guanghua School of Management and a senior fellow at the Carnegie Endowment for International Peace.

The book has a provocative title but it’s apposite, given the growing global rivalry between the US and the China with the implementation of trade tariff and technology war, as the US tries to curb and reverse the rising share of trade and hi-tech production that China has been achieving and using to widen its influence globally; at the expense of an ageing and relatively declining US hegemony.

The subtitle of the Klein and Pettis’ book is “how inequality distorts the global economy and threatens international peace.” Klein and Pettis argue that the origins of today’s trade wars emerge from decisions made by politicians and business leaders in China, Europe, and the United States over the past thirty years. Across the world, the rich have prospered while workers can no longer afford to buy what they produce, have lost their jobs, or have been forced into higher levels of debt.  Rising inequality has weakened aggregate demand; and a global ‘savings glut’ generated by countries like Germany and China are creating huge global imbalances in demand and supply that threaten economic crises, increased protectionist rivalry and international peace.

The essence of the problem for Klein and Pettis is “the greater eagerness of producers to sell than of consumers to buy”. According to them, this is at the heart of the imperialist rivalry globally. The authors revert openly and clearly to the thesis of John Hobson, the anti-semitic, social reformist writer and economist of the early 20th century.  They update the Hobsonian thesis for the 21st century. As Pettis puts it: “Our argument is fairly straightforward: trade cost and trade conflict in the modern era don’t reflect differences in the cost of production; what they reflect is a difference in savings imbalances, primarily driven by the distortions in the distribution of income. We argue that the reason we have trade wars is because we have persistent imbalances, and the reason we have persistent trade imbalances is because around the world, income is distributed in such a way that workers and middle class households cannot consume enough of what they produce.

Thus, we have a straightforward underconsumption theory of crises as presented by Hobson. What is added by the authors is the concept of a ‘global savings glut’, or the reciprocal of a lack of consumption, which generates ‘global imbalances’ between those countries running systematic trade and income surpluses (China, Germany) with others (the US) running chronic deficits. This imbalance of consumption and saving between the major economic powers is the essential cause of future crises and even wars, according to the authors.

What is missing from this analysis is what is missing from all underconsumption theories; namely investment ie capitalist investment.  Consumption is not the only category of ‘aggregate demand’; there is also investment demand by capitalists. Indeed, Marx argued that this was the most important factor in driving growth of production in a capitalist economy – and even Keynes sometimes agreed.  I have shown in several posts and papers that it is capitalist investment that is the ‘swing factor’ in booms and slumps – a fall in investment leads capitalist economies into slumps and leads them out.  Consumption is a lagging factor, and indeed changes in consumption are small during the cycle of boom and slump compared to investment.

The national savings ratio of the advanced capitalist economies in 2019 is no higher than in 2007, while the investment ratio has fallen 7%.  There has been an investment dearth not a savings glut.  In my view, this is not the result of a lack of aggregate demand caused by rising inequality and the inability of workers to buy back their own production. It is the result of the declining profitability of capital in the major capitalist economies, forcing companies to look overseas to invest where profitability is higher (the investment ratio in emerging economies is up 10% in the last ten years – something Klein and Pettis do not note.). As usual with Keynesian and post-Keynesian analyses, the movement of profit and profitability is ignored.

Klein and Pettis like to refer to the work of Mian and Sufi who emphasise rising inequality from the 1980s, a shift in income from the poorer to the top 1%, leading to a rise in household debt and a ‘savings glut’.  But the latter do not explain why there was rising inequality from the early 1980s and they ignore the rise in corporate debt which is surely more relevant to capital accumulation and the capitalist economy.  Household debt rose because of mortgage lending at cheaper rates, but in my view, that was the result of the change in nature of capitalist accumulation from the 1980s, not the cause.  Actually, in their new work, Mian and Sufi hint at this. They note that the rise in inequality from the early 1980s “reflected shifts in technology and globalization that began in the 1980s.”  Exactly. What happened in the early 1980s?  The profitability of productive capital had reached a new low in most major capitalist economies (the evidence for this overwhelming – see World in Crisis, the co-edited by G Carchedi and me).

If we are measuring ‘aggregate demand’ by consumption globally, there has been no decline; on the contrary, household consumption in the major economies rose to new highs as a share of GDP.  What ended this speculative credit boom was the turning down in the profitability of capital from the end of the 1990s, leading to the mild ‘hi-tech’ bubble burst of 2001 and eventually to the financial crash and Great Recession of 2008. A ‘savings glut’ is really one side of an ‘investment dearth’. Low profitability in productive assets became a debt-fuelled speculative bubble in fictitious assets.

Crises are not the result of an ‘indebted demand’ deficit; but are caused by a ‘profitability deficit’. The ‘class war’ that Klein and Pettis argue is the cause of trade wars is related to the exploitation of labour by capital for higher profitability, not a lack of domestic consumption caused by low wages.

Klein and Pettis follow John Hobson in his argument that ‘imperialism’ (or trade wars for our authors) was the result of capital being forced to seek new markets overseas because of the lack of consumption demand at home.  Pettis: “It’s interesting to go back to Hobson. He argued that the reason England and other European countries exported capital abroad was not military adventurism, but income inequality. You had incredibly high savings because much of the income was concentrated among the wealthy, and so England had to export those excess savings and the accompanying excess production. Imperialism enabled it to lock in markets for both of those exports. Hobson’s prescription was that increasing the wages of English workers such that they’re able to consume what they produce would make imperialism unnecessary—and this is where I see the connection to today.”

This is what Hobson reckoned for the late 19th century. But the evidence does not back this up. The UK was the leading imperialist power of the 19th century. The great economist J Arthur Lewis summed up the driver behind Britain’s imperialist ambitions in the late 19th century. “In the low level of profits in the last quarter of the century we have an explanation which is powerful enough to explain the retardation of industrial growth in the 1880s and 1890s… we have here also, in low domestic profits, the solution to the great mystery of British foreign investment, namely why Britain poured so much capital overseas…  home industry was so unprofitable in the 1880s through the squeeze on profits between wages and prices.” Lewis shows that during the long depression, nominal wages fell, but as prices fell more, real wages stayed up at the expense of profits.  (See my book, The Long Depression).

As the Marxist economist of the 1920s, Henryk Grossman said of Hobson’s thesis: “It is not enough to account for capital export in terms of the lack of profitable investment opportunities at home, as the liberal economist and pioneering critic of imperialism, John Hobson put it”.  “[W]hy,” then, “are profitable investments not to be found at home?…..The fact of capital export is as old as modern capitalism itself. The scientific task consists in explaining this fact, hence in demonstrating the role it plays in the mechanism of capitalist production.” It is the race for higher rates of profit that is the motive power of world capitalism. Foreign trade can yield a surplus profit for the advanced country.

From about the 1980s onwards, the rate of profit in the major economies reached new lows, so the leading capitalist states again looked to counteract Marx’s law through renewed capital flows into countries that had massive potential reserves of labour that would be submissive and accept ‘super-exploiting’ wages. World trade barriers were lowered, restrictions on cross-border capital flows were reduced and multi-national corporations moved capital at will within their corporate accounts.  This explains the policies of the major imperialist states at home (an intensified attack on the working class) and abroad (a drive to transform foreign nations into tributaries).

A recent paper by two economists at the US Federal Reserve, Joseph Gruber and Steven Kamin shows a widening gap between corporate savings (or profits) and corporate investment in most of the major economies (Gruber corporate profits and saving.) But Gruber and Kamin demonstrate that this was because rates of corporate investment “had fallen below levels that would have been predicted by models estimated in earlier years”.  With the exception of Japan, since 1998, corporate savings to GDP have been broadly flat. But there has been a fall in the investment to GDP ratio in the major economies, with the exception of Japan, where it has been broadly flat. So the gap between savings and investment cannot have been caused by rising savings. 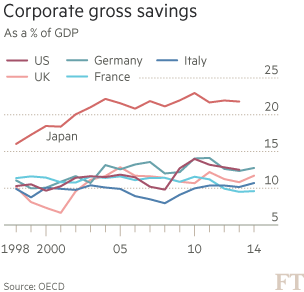 There has NOT been a global corporate savings (or profits) ‘glut’ but a dearth of investment.  There is not too much profit (surplus savings), but too little investment. The capitalist sector has reduced its investment relative to GDP since the late 1990s and particularly after the end of the Great Recession.

As profitability fell, investment declined and growth had to be boosted by an expansion of fictitious capital (credit or debt) to drive consumption and unproductive financial and property speculation.  The reason for the Great Recession and the subsequent weak recovery was not a lack of consumption or a savings glut, but a collapse in investment.

19 thoughts on “Trade wars and class wars: part one – the global savings glut?”