The news that Japan’s real GDP dropped sharply in the last quarter of 2019 and the economy appears to be entering a new ‘technical’ recession (two consecutive quarterly contractions) in 2020 has produced a reaction from mainstream economics.

The worry is that ‘Abenomics’ – the economic policy approach of the current Liberal Democrat prime minister, Shinzo Abe – is failing.  Abenomics was introduced in 2012 after a fanfare of support and encouragement by such economic luminaries as Ben Bernanke, former head of the US Federal Reserve and now President of the American Economics Association;, and Paul Krugman, Nobel prize winner and leading Keynesian guru.  Both economists were invited by Abe to address the Japanese cabinet on the right policies to get Japan out of the stagnation that the economy had experienced through the 1990s and then after the impact of the Great Recession of 2008-9.

Bernanke, being a leading monetarist, proposed reducing interest rates and pumping huge injections of credit (quantitative easing) by the Bank of Japan into the banks –  just as he had done with the Federal Reserve in the US.  Paul Krugman supported that but also advocated increased government spending by running budget deficits in order to stimulate demand.  In essence, Abe was encouraged to adopt the two policy proposals of mainstream/Keynesian economics (monetary and fiscal) to get a capitalist economy out of stagnation and the recurrence of a slump.  Indeed, these policies are exactly what is proposed now to get the world capitalist economy out of its low growth in GDP, investment and productivity in 2019.

Abe adopted these policies as two of the three ‘arrows’ of Abenomics.  The other arrow was ‘structural reform’, a nice name for ‘neoliberal’ policies of reducing labour rights, privatisations, pensions and holding down wages so that costs of production are reduced and profitability of capital is raised.  At the time, I called Abenomics a Keynesian/neoliberal mix.  And I said Abenomics will prove to be a failure because “Keynesian policies in the 1990s did not work for Japan and they probably won’t work in this decade either.”  I concluded that “Japan now has a policy recipe that the IMF in its new anti-austerity mode would approve: fiscal and monetary stimulus along with reducing the power of labour and government regulation.  So Japan’s experiment combines all known mainstream economic potions in one bottle to take on the ‘unknown unknowns’.  Watch this space.”

Well, after watching, we find that Abenomics has not worked and Japan is heading back into another slump after a yet another lost decade of stagnation.  So what is the response of the mainstream?  The Financial Times editorial was quick to tell us. “All the elements of Abenomics needed to work together to push the economy to a new balance: monetary stimulus to weaken the yen, fiscal stimulus to jump-start demand and structural measures such as trade deals to create growth opportunities and incentives for business investment. It was never going to be easy but this combination proved its worth. 2013 brought a sharp weakening of the yen and a burst of optimism.”

But then says the FT, the government tried to reduce its budget deficits and huge government debt ratios by introducing a consumption (sales) tax that hit fragile consumer spending and demand has collapsed.  The answer is that “the only sensible action Mr Abe can take in the short-term — other than a politically impossible reversal of the tax rise — is more fiscal stimulus. The problem, as it has been throughout the past seven years, is not Abenomics. The problem is not enough of it.”  Paul Krugman was also quick to support the FT’s message “If you have zero interest rates and a weak economy nonetheless, you need fiscal stimulus, not austerity.” The IMF also echoes this view: “Japan needs to strengthen the mutually-reinforcing policies of “Abenomics”—including monetary easing, flexible fiscal policy, and structural reforms (particularly labor market reforms).”

But were a tax hike and reduced budget deficits (ie ‘austerity’) the cause of this new recession? Would more Abenomics really do the trick after failing for the last eight years?  It’s true that the annual budget deficit as a% of GDP has been falling since 2010 but throughout the period of the lost decade of the 1990s, budget deficits were widened sharply and yet Japan stagnated.  And the annual deficits have been higher since the Great Recession than in most of the 1990s.

Despite nearly three decades of government budget deficits, Japan has stagnated with an average real GDP growth rate of 1%, interspersed with recurring ‘technical’ recessions.  Indeed, Japan’s fastest growth period was from 2002-2007, when austerity was imposed by Koizumi!

So history does not support the Keynesian policy solution.  Moreover, it does not augur well for the policy conclusions of Modern Monetary Theory (MMT).  MMT exponents argue that governments should run ‘permanent’ budget deficits to boost government spending to the point where ‘full employment’ is achieved.  There would be no need to worry about the size of government debt because a country like Japan, which services that debt from Japanese citizens’ savings through the banks buying government bonds, will never default.

It’s true that Japan is unlikely to default on its debt, the highest public debt ratio in the world, particularly with interest at or near zero.  But on the other hand, Japan has done exactly what MMT suggests and has run permanent government deficits, spending it on construction and other projects and yet Japan’s economy has stagnated.

The MMT retort could be to say that the positive result of these deficits is that there is full employment in Japan.  The official unemployment rate is at a record low of 2.2%.

And employment has rocketed.

But this is a phenomenon that has been repeated in other G7 economies.  Both the UK and the US also have record low official unemployment rates and the rate in the Eurozone has also dropped sharply in the last ten years.  But in all these countries, this employment is not in well-paid, secure jobs, with training and career prospects.  Most are in ‘precarious’, low paid, low skill work.

In Japan, most of the new employees are women and older people who are taking up jobs in health and social care, temporary and part-time, the lower end of wage market. More than a third of the Japanese workforce is working in non-regular positions. Factors underlying this situation include the increasing number of older people who become contract or temporary workers after retirement. 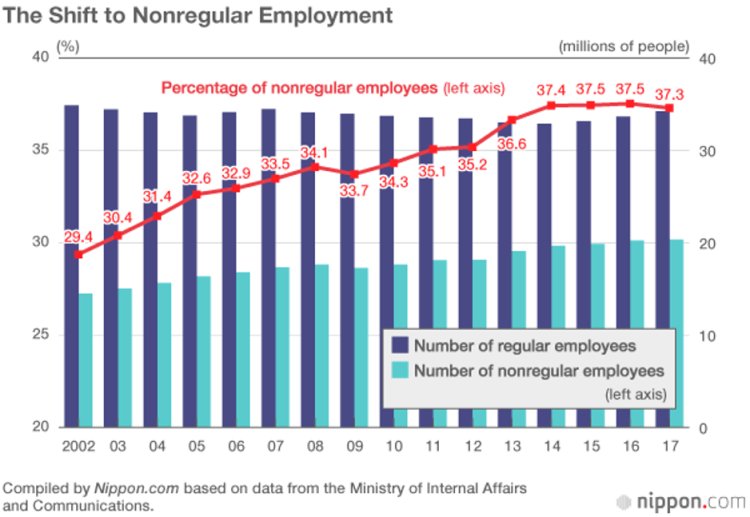 These workers are having to do two or more jobs to make ends meet.  Some people are working 70-hour weeks out of multiple jobs. According to Lancers research, some 4.5 million full-time workers in Japan have second jobs, where they work, on average, between six and 14 additional hours each week, on top of any overtime hours they clock at their primary job; a small number of them work up to 30 or 40 hours per week at their second jobs.

In the food-service industry, workers are in such short supply that McDonald’s recently resorted to an expensive advertising campaign aimed at recruiting housewives and retirees to help out with its busiest shifts. Convenience-store chains have hired more foreign workers, while small and mid-sized manufacturing companies have increasingly turned to automation.

But the one recruitment strategy that hasn’t really taken hold is increasing wages! Instead, Japan’s corporations have chosen to sit on the piles of cash they’ve earned from Abe’s fiscal policy. Each spring, over the past six years of Abenomics, the leaders of Japan’s major industries have ceded remarkably little ground to unions during the annual wage negotiations known as shuntō. Overall, workers are spending an average of 11 percent more time to earn the same salary they were bringing home about 20 years ago, and some are working unpaid overtime on top of that.

Employ, pay them little and don’t invest.  That has been the policy of the capitalist sector in most of the major economies since the Great Recession and the result is that the productivity of labour has hardly risen.  In the case of Japan, the population has been falling and ageing.  So per capita income growth has been better than total GDP growth.  Per capita Japan’s real GDP is up 10.8% since 2010 while real GDP is up 9.6%.  Even so, a Malthusian solution (reducing the population) is hardly a way of raising incomes for those still living.  And the Malthusian solution is set to worsen over the next generation as Japan ages at a fast rate. 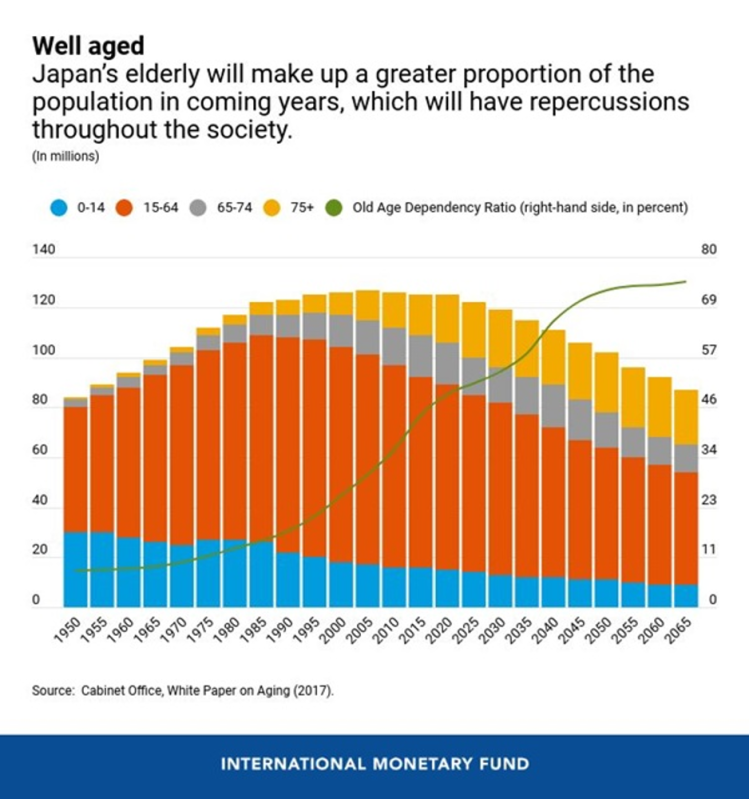 That brings us to the third arrow of Abenomics: so-called ‘structural reforms’.  Reducing the cost of production by deregulating the labour market, privatising and cutting taxes on profits etc – these measures aim to help boost the rate of exploitation and the profitability of capital in Japan.  As I said in 2012, the real purpose of Abenomics was to raise the profitability of Japanese capitalism, at the expense of labour.  Neoliberal measures were applied under Premier Koizumi at the end of the 1990s and they had some success in raising profitability.  So Japan’s economic growth was relatively better in the 2000s up to the Great Recession and the tsunami than in the 1990s.

That was because Japan’s corporate profitability improved. It did so because the then neo-liberal government of prime minister Koizumi opted for the restructuring of the banks, privatisation of state agencies and higher taxes on consumption.  This produced a short revival in profitability, at the expense of average living standards, reduced pensions and worse work benefits.

while he hiked employee social security contributions to reduce the burden for employers.

The outcome was a shift in the share of labour in national income towards profit share. Real wages per employee fell and, with it, household spending.

But this has not been sufficient to restore profitability to even pre-GR levels.

*This rate of return measure is compiled from IRR series in the Penn World Tables 9.1 with an estimated update for 2018 and 2019 using the AMECO database on NRR.

After the great hi-tech expansion and credit bubble burst in Japan at the end of the 1980s, the profitability of capital plummeted in Japan, and, with it, investment and output.  The Koizumi reforms and the global credit boom after 2001 helped to restore profitability somewhat.  But then came the Great Recession and profitability dropped again. The period of Abenomics saw a small recovery up to 2017, but profitability has fallen back again and remains near Great Recession lows.

This is the underlying causal factor behind low investment rates and stagnation – as it is in many other major capitalist economies.  Neither Monetarist not Keynesian stimulation (the first two arrows of Abenomics) have done anything to reverse that.  Structural reforms to reduce labour and other production costs might help profitability but politically that would be very difficult to impose.  Abenomics continues to fail.  More Abenomics, as suggested by the mainstream/Keynesian voices, won’t change that.