In this last part of my review of ASSA 2020, I want to cover some other issues discussed at ASSA, especially one big issue: the economics of climate change; and finally, look at the papers in the sessions organised by the Union for Radical Political Economics (URPE) – the main association covering Marxist economics.

One populist subject over the last few years has been the role and value of cryptocurrencies.  I have discussed these privatised digital currencies on my blog here. The debate continues on how well a cryptocurrency can serve as a means of payment. One paper argued that cryptocurrencies need to overcome double spending by using costly mining and by delaying settlement. Indeed, the authors reckon that bitcoin “generates a welfare loss that is about 500 times larger than a monetary economy with 2% inﬂation” because it is so costly to ‘mine’ and because of slow settlement.  Only if an economy had 50% inflation would the loss to users be higher than bitcoin.  Clearly, these cryptocurrencies are never going to replace state fiat currencies as a means of payment. TheEconomicsOfCryptocurrencies_Bitco_preview t

Bill Nordhaus was awarded the Nobel (Riksbank) prize for pioneering work on using an integrated climate-economy assessment model (IAM) to study when and how the tipping point affects the social cost of carbon dioxide. While the mainstream has lauded Nordhaus, the reality is that IAMs have proved to be mostly useless.  Most IAMs struggle to incorporate the scale of the scientific risks, such as the thawing of permafrost, release of methane, and other potential tipping points. Furthermore, many of the largest potential impacts are omitted, such as widespread conflict as a result of large-scale human migration to escape the worst-affected areas.

The IPCC’s mitigation assessment concluded from its review of IAM outputs that the reduction in emissions needed to provide a 66% chance of achieving the 2°C goal would cut overall global consumption by between 2.9% and 11.4% in 2100. This was measured relative to a ‘business as usual’ scenario. But growth itself can be derailed by climate change from business-as-usual emissions. So the business-as-usual baseline, against which costs of action are measured, conveys a misleading message to policymakers that fossil fuels can be consumed in ever greater quantities without any negative consequences to growth itself. And heterodox economist Steve Keen has debunked Nordhaus’ calculations, which suggest that even a 4C rise global temparatures would have only a limited effect on growth and welfare over the rest of this century and in effect there was no tipping point when global warming would get out of control.

Based on this relatively benign view, mainstream economics concentrates on carbon pricing and taxes to mitigate global warming, rather than radical action to end fossil fuel production through control of the major energy companies. This is why the mainstream session on climate change was entitled Carbon Tax Policy with the discussion around whether carbon taxes would slow economic growth and whether carbon taxes would add to fiscal costs or not.  You will be pleased to hear that the presenters concluded that carbon taxes will not slow economic growth and there could actually be fiscal gains through reducing the cost of dealing with floods, droughts hurricanes. MeasuringTheMacroeconomicImpactOfC_preview (2)

So that’s all right then.  Only it isn’t.  All the latest climate science suggests that the tipping points are approaching fast and allowing fossil fuel production to continue while trying to reduce its use by ‘market’ solutions’ like carbon pricing and taxes will not be enough.TippingPointsInTheClimateSystemAnd_preview

In the URPE sessions, Ron Baiman of Benedictine University pointed out that the money created by the Fed for the three-year 2008-2011 financial bailout would have paid for almost thirty years 2020-2050 of global climate crisis mitigation through a Global Green New Deal (GGND). FinancialBailoutSpendingWouldHave_preview Mathew Forstater et al reckoned that the transition to a sustainable economy and just society required a transformation in the technological structure of production away from fossil fuel-based and toward renewable energy-based technologies.  Peter Dorman reckoned that the GND-type policies won’t be enough. It required structural change in the economy.  TheClimateCrisisAndTheGreenNewDea_preview (2)

Another big issue at ASSA is what is happening in China and what will happen in the continuing trade and technology war with the US.  There were dozens of mainstream sessions that covered or referred to China from all sorts of angles.  Clearly China dominates much of mainstream research.

There is the question of China’s fast growth and pollution. According to Bharati et al, China has not achieved the turning point of where pollution and emission no longer positively relate to the economic growth. But that would happen in 2036 or so.  According, to NAME, both countries lose from the Trump tariffs, where high-tech industries are disproportionately affected. China mainly loses from the decline in the production scale of its high-tech industries, while the US mainly lose from the increasing input prices used in its high-tech industries. In addition, Japan also loses from the Trump tariff due to higher input prices. FuelingTheEnginesOfLiberationWithC_preview

Suprabha Baniya et al conclude that China’s Belt and Road Initiative increases trade flows among participating countries by up to 4.1 percent; (ii) these effects would be three times as large on average if trade reforms complemented the upgrading in transport infrastructure; and (iii) products that use time sensitive inputs and countries that are highly exposed to the new infrastructure and integrated in global value chains have larger trade gains. TradeEffectsOfTheNewSilkRoad_preview (1)

An URPE session also covered China.  Brian Chi-ang Lin, National Chengchi University reckoned that If China keeps growing (even at a slower rate), China could eventually regain the global economic power she once had in the seventeenth and eighteenth centuries, under its current model. “Under Chinese President Xi Jinping, China has recently initiated a series of important policies such as the domestic nationalization of private corporations and the international One Belt One Road (OBOR) initiative to promote the national economy and, accordingly, to sustain the CCP’s authoritative regime.”

Finally, let me look at some of the interesting papers on Marxist theory presented in the URPE sessions. Carolina Alves from Girton College, University of Cambridge developed some new ideas on Marx’s concept of fictitious capital in relation to government bonds. “Fictitious capital does not represent real capital but it is increasingly the channel through which the dominance of interest bearing capital over other capitals occurs. Government bonds are the most important tools whereby the state is able to intervene in the financial market. the backbone of operations in the secondary market, and a source for financial accumulation, rather than as a fortuitous aspect of state finance. So public debt can neither be avoided nor paid off in capitalist economies, and government bonds now offer an unparalleled scope for purely financial accumulation.”
TowardsACriticalFramework_Government_preview

Sergio Camara Izquierdo from the Metropolitan Autonomous University (UAM)-Azcapotzalco, and one of the authors in our book, World in Crisis, analysed the trends in profitability and accumulation in Mexico in the postwar period. with new estimations that includes intangible assets and geometric patterns of depreciation. Camara reveals expansive (1939-1982) and contractive (1983-2018) long waves in capital accumulation within which there us ae neoliberal contractive wave.  And note the collapse in profitability of capital in Mexico from the 1990s with the formation of NAFTA. 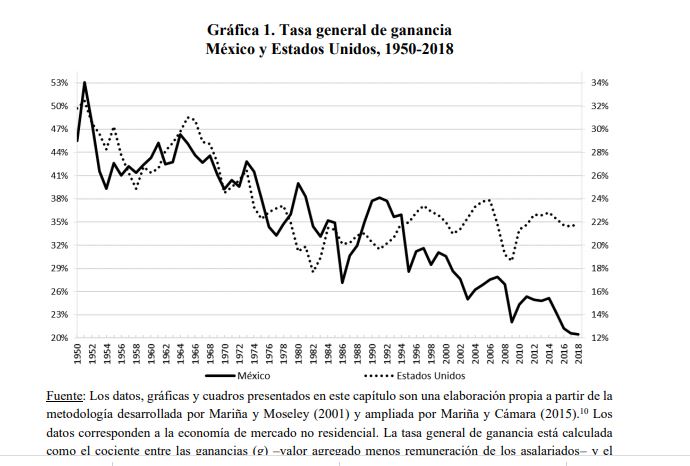 Baris Guven from the University of Massachusetts-Amherst attacked the idea of Marxian political economy that places great emphasis on the nexus between technological change and capital accumulation, based on the profit-motive and competition.  For Guven, on the contrary, the profit-motive is the reason why capitalist economies are prone to underproduce technical (and scientific) knowledge. It is the state that does the technological fix, and this fix, in addition to others, supports reproduction of capital accumulation at extended scale.  In other words, no innovation without state intervention.  While there is some truth in the argument that the state has played a crucial role in boosting technology, as Mariana Mazzucato has shown, profitability remains the key driver.  When profitability is low, then investment and productivity growth will slow.

There was a whole session on post-Keynesian theory, with the usual theme of financialisation there.  And there was a session developing the ideas of Hyman Minsky alongside those from a Marxist perspective.  I particularly liked the paper by Masahiro Yoshida of Komazawa University who provided some emphatic data on the extreme ‘rentier’ nature of the UK economy, with the highest services value-added share and the largest finance services share in the g20. As UK financial services are more important than the US for minimising the current account deficit and the majority of the UK’s financial services are exported to the EU, the impact of Brexit is yet to be felt. TheDevelopmentOfCapitalAccumulation_powerpoint (2)

And Jan Toporowski’s paper made some telling points against the ‘free lunch’ perspective of Modern Monetary Theory. “This economical, apparently free, method of financing government expenditure is of course attractive when public services, welfare and infrastructure are deteriorating in the face of austerity. But this low cost is only the case at the time of the expenditure. To understand the true efficiency of this kind of financing, it is necessary also to consider the consequences of such financing. In particular, it is necessary to understand how that money would be absorbed by the economy.”

Finally, Riccardo Bellofiore straddled both the post-Keynesian and Marxist theory (as Riccardo usually does!) – with two papers.
Minsky’sSocializationOfInvestment__preview (5)
MarxBetweenSchumpeterAndKeynes_Augu_preview (1)
I’ll refer to Riccardo’s discussion of the relation between the ideas of Minsky and Marx in a future post.  But for now, that’s enough.