John Weeks is Professor Emeritus at the School of Oriental & African Studies, University of London.  He is also a coordinator of of the UK’s Progressive Economic Forum (“founded in May 2018 and brings together a Council of eminent economists and academics to develop a new macroeconomic programme for the UK.”).

John Weeks’ new book is The Debt Delusion: Living Within Our Means and Other Fallacies. It aims at demolishing economic arguments for the necessity of austerity.  ‘Austerity’ is the catch word for the policy of reducing government spending and budget deficits and public sector debt.  This has been considered as necessary to achieve sustained economic growth in capitalist economies after the Great Recession of 2008-9.  The argument of governments and their mainstream advisors was that public sector debt had mushroomed out of control. The size of the debt compared to GDP in most countries had got so high that it would drive up interest costs and so curb investment and growth in the capitalist sector and even generate new financial crashes.  Austerity policies were therefore essential.

Keynesians and other heterodox economists rejected this analysis behind austerity policies.  Far from trying to balance the government books, governments should run deficits when economies were in recession to boost aggregate demand and accelerate recovery.  Rising public debt was no problem as governments could always finance that debt by borrowing from the private sector or just by ‘printing’ more cash to fund deficits and debt costs (debt costs being the interest paid on government bonds to the holders of that debt and the rollover of the debt).  Austerity was not an economic necessity, but a political choice bred by the ideology of insane and out of date economics and self-serving right-wing politicians.

The most important myth to crack, according to Weeks, is the idea that government budgets are like household budgets and must be balanced.  This is nonsense.  Governments can run annual budget deficits by borrowing, as indeed can households, as long as they have the income to cover the interest and repayments costs.  Moreover, in the case of governments, all the major countries have run annual deficits for decades. “Even the Germans, those paragons of a balanced budget, have only had a surplus in seven of the past 24 years, and more than half of these were in the past four years.”

Indeed, households often resort to credit, short and long term. Long-term credit often even reduces expenditure. The same is true for a government. As Weeks emphasises, most long-term credits for governments are used to purchase assets (capital spending), some of which even produce income (such as social housing), others that serve important functions for our societies (for example schools, hospitals, public transport). The public sector creates use values (to apply Marx’s terms) ie things or services that people need and so boosts GDP.

Weeks makes the key point that before the global financial crash and the Great Recession, it was not rising public sector debt that was the problem, but fast-rising private sector debt as households increased mortgage debt at low interest rates to buy homes and the finance sector exponentially expanded their own debt instruments to speculate.  It was the bursting of this private sector credit boom that led to the credit crunch of 2007 and the banking crash, not high public debt. Instead, the latter became the trash can for dumping private debt as governments (taxpayers) picked up the bill.

But from hereon I part with Professor Weeks’ analysis.  Professor Weeks adopts the Keynesian view that the cause of crises under capitalism is the “lack of effective demand”.  He argues that, as austerity policies reduce aggregate demand, they are the main cause of the Great Recession and the poor recovery afterwards “the principle (sic) cause of our economic woes, which predates Brexit by several years and largely accounts for the global slowdown, are austerity policies by the governments of most of the G7 countries, whose economies together account for over half of global output.”

Back in the 1970s and 1980s, Professor Weeks criticised convincingly this Keynesian demand argument from a Marxist perspective (see John Weeks, “The Sphere of Production and the Analysis of Crisis in Capitalism,” Science & Society, XLI, 3 (Fall, 1977) and John Weeks on underconsumption) .  But now as coordinator of the Keynesian Progressive Economy Forum, he writes that “capitalist economies do suffer periodically from extreme instability, the most recent example being the Great Financial Crisis of the late 2000s. These moments of extreme instability, recessions and depressions, result … from private demand “failures”; specifically, the volatility of private investment and to a lesser extent of export demand.” He goes further: “public expenditure serves to compensate for the inherent instability of private demand. This is the essence of “counter-cyclical” fiscal policy, that the central government increases its spending when private demand declines and raises taxes when private expenditures create excessive inflationary pressures. During 1950-1970 that was the policy consensus, and it coincided with the “golden age of capitalism”.

So Weeks says, the lack of effective demand can be overcome or avoided by government spending and that is why capitalism worked so well back in the 1960s.  If we just drop austerity policies and go back to Keynesian-style government ‘demand management’, all will be well.

But just as excessive government spending, budget deficits or public debt was not the cause of the financial crash and the Great Recession, neither was austerity. Indeed, Carchedi has shown that before every post-war recession in most capitalist economies, government spending was rising as a share of GDP, not falling.

% change in government spending one year before a recession 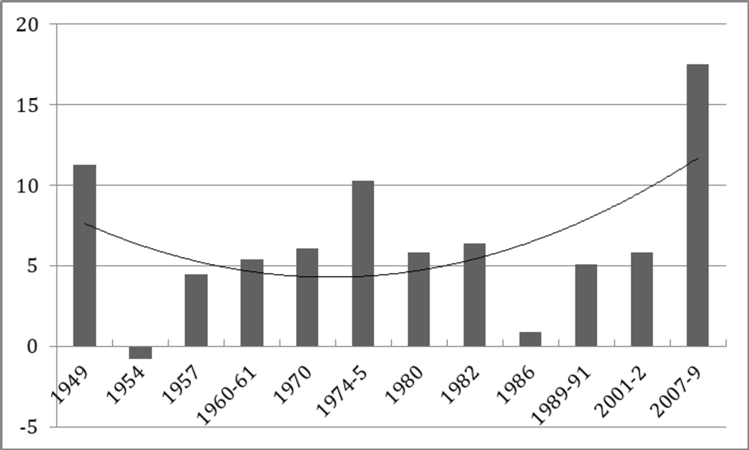 Rising government spending and regular budget deficits did not enable any major capitalist economy to avoid the Great Recession.  For example, Japan ran budgets deficits for over a decade before the 2008-9 slump.  It made no difference.  Japan entered the slump, as did every other major economy.

And after the Great Recession ended, there is little evidence that those countries that ran budget deficits and thus increased public sector debt recovered quicker and increased GDP more than those that did not.  Several studies show the so-called Keynesian multiplier (the ratio of real GDP growth to an increase in government spending or budget deficit) is poorly correlated with the economic recovery after 2009. (see below). The EU Commission finds that the Keynesian multiplier was well below 1 in the post-Great Recession period.  The average output cost of a fiscal adjustment equal to 1% of GDP is no more than 0.5% of GDP for the EU as a whole.

What does show a high correlation is the change in the rate of profit on productive assets owned by the capitalist sector. 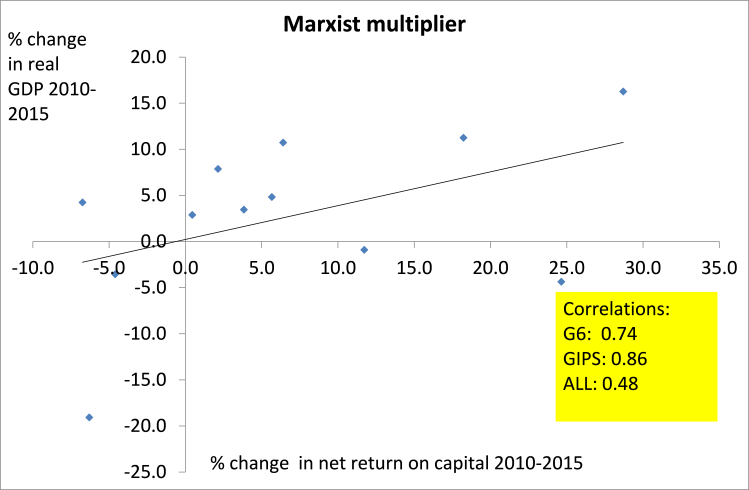 If the rate of profit falls, there is a high likelihood that the rate of investment will fall to the point of a slump.  Then there is a ‘lack of effective demand’.  This Marxist multiplier, as Carchedi and I call it, is a much better explanation of booms and slumps in modern capitalist economies than the Keynesian demand multiplier.

This is not really surprising if you think about it.  What happens in the capitalist sector of the economy, which is about 80% of value in most countries, must be more decisive than what happens in the government sector, even if there is a significant Keynesian multiplier effect (which there is not, on the whole).  What matters in modern capitalist economies is the level and change in the rate of profit and the size and cost of corporate debt; not the size of public spending and debt.

There has been a long debate about whether ‘excessive’ public debt can slow economic growth by ‘crowding out’ credit for investment by the capitalist sector.  There was the (in)famous debate started by mainstream economists Reinhart and Rogoff etc.  They argued that if a country ran up a public debt ratio above 100% of GDP, that was a recipe for a slump or at least economic slowdown. The two Rs figure and methods were exposed to ridicule. But the debate remains.  Rogoff continues to argue the case.  And others present more evidence that high public debt can damage the capitalist sector.

A recent paper looking at data for over half a million firms in 69 countries found that high government debt affects corporate investment by tightening the credit constraint faced by companies, especially those companies that find it difficult to get credit: “when public debt is at 25% of GDP, the correlation between investment and cash-flow is just above 9%, but this correlation goes well above 10% when public debt surpasses 100% of GDP. This finding is consistent with the idea that higher level of public debt tightens the credit constraint faced by private firms.”  What this means is that, as banks use more and more of their cash on buying government bonds, they have less available to lend to firms – “crowding out”.

In a way, Weeks’ book is outdated.  ‘Austerity’ is no longer the cry of the international agencies like the IMF, ECB or capitalist governments.  On the contrary, with the failure of monetary policy (zero interest rates, quantitative easing) to get economies back on a pre-2007 growth path, everybody (except the German government) has become Keynesian.  Fiscal policy (more government spending, running budget deficits by issuing bonds or just ‘printing’ money) has become the order of the day.  Japan has just launched a massive new fiscal stimulus programme to expand public works.  New ECB President Christine Lagarde has called for more fiscal spending by governments, as have the IMF and the OECD.

But as I have argued before, if introduced, fiscal stimulus will also fail in getting capitalist economies out of the slowest economic ‘recovery’ from a slump since the 1870s.  As European economist, Daniel Gros, shows in a recent paper, “the overall conclusion is clear. One would need a very large fiscal deficit to have even a modest impact on inflation or interest rates. Fiscal policy cannot save the ECB.”

Professor Weeks’ book shows that opposing budget deficits and rising public debt because it will cause slumps or low growth is a delusion.  But on the other hand, running government deficits won’t avoid slumps and will have little impact on boosting economic growth in capitalist economies.

20 thoughts on “The debt delusion”