Jorg Nowak, a fellow at the University of Nottingham, UK has just published Mass Strikes and Social Movements in Brazil and India:: popular mobilisation in the Long Depression.  Nowak argues that in the 21st century and in this current long depression in the major economies, industrial action is no longer led by organised labour ie trade unions, and now takes the form of wider ‘mass strikes’ that involve unorganised workers and wider social forces in the community.  This popular mobilisation is closer to Rosa Luxemburg’s concept of mass strikes than the conventional ’eurocentric’ formation of trade unions.

The nature of global labour struggles against capital and the changing forms of class conflict is important.  But what also interested me was Nowak’s chapter on the political economy of mass strikes in the current global capitalist crisis – and in particular the section on strikes and economic cycles (pp113-117).

In that section, Nowak develops the argument that the intensity of class conflict between labour and capital varies with stages in the economic cycle of capitalist economic upswings and downswings.  He cites various authors who seek to show that when capitalism is in a general upswing in growth, investment and employment, class conflict as expressed in the number of strikes rises, particularly near the peak of the upswing.

Nowak surveys the work of those authors (including my own) that assert evidence for a Kondratiev-type cycle or wave in capitalist expansion. The mostly likely length of a full Kondratiev cycle is put at 64-72 years (longer than traditionally claimed).  If that K-cycle is broken down into ‘seasons’; first there is the ‘spring’ period of recovery from depression, with rising profitability of capital and a revival of labour organisation; then there is a summer period of falling profitability and strong labour forces.  Those two seasons complete the K-cycle upswing.  Then in the downswing comes autumn (rising profitability but weakened labour) and finally winter (economic depression).  Nowak reckons that the two periods of most intensive class conflict are at the cusp of spring through into summer seasons (as in 1964-82, for example).  Then there are weaker more local struggles towards the end of the downswing in the winter season. Nowak presents two case studies based on India and Brazil in the period 2010-14 to argue for this theory and to generalise it internationally.

Back in 2006, in my book, The Great Recession (2009), I also argued that K-cycles could be correlated with the intensity of class struggle.  I developed this further in my book, The Long Depression (2016).  More recently, I wrote a chapter on the UK in World in Crisis (2018) in which I outlined the trajectory of the UK rate of profit since 1855 and how it matched broadly the ‘seasons’ in the K-cycle.

In 2017, I took this scenario further in a paper to the Capital:150 conference held in London to commemorate the publication of Marx’s Capital Volume One.  In that paper, I attempted to map out the class struggle in relation to the movement in the rate of profit for the UK.

When Marx was writing Capital, the UK economy was experiencing a boom in profitability and growth and British capital was ruling the world and at its zenith.  However, from the late 1860s, profitability turned down and the UK, along with other major economies entered a long depression through the mid-1880s (longer in the US).  Depression weakened the old unions and class struggle faded.  After the crushing of the Paris Commune in 1871, the first international was dispatched to retirement in New York by Marx.

If we look at the history of British capital after Marx’s death in 1883, I think we can link the profitability of capital to the intensity of class struggle as defined by the level of strikes.  In the period from the 1890s to WW1, we find that strikes were initially high as new mass unskilled unions formed as British capital recovered some profitability after the end of the depression of 1880s.  But strikes dropped off after the late 1890s as profitability rose and wage demands were met.  However, from the 1900s profitability of capital began to diminish and in the years leading up to the war, strong unions and a rising labour movement engaged in more intensified struggle.

After the end of the war, that struggle resumed.  But with the defeat of the transport unions in 1921 and the general strike in 1926, UK profitability jumped up and intense class struggle dropped away through to the end of the WW2. 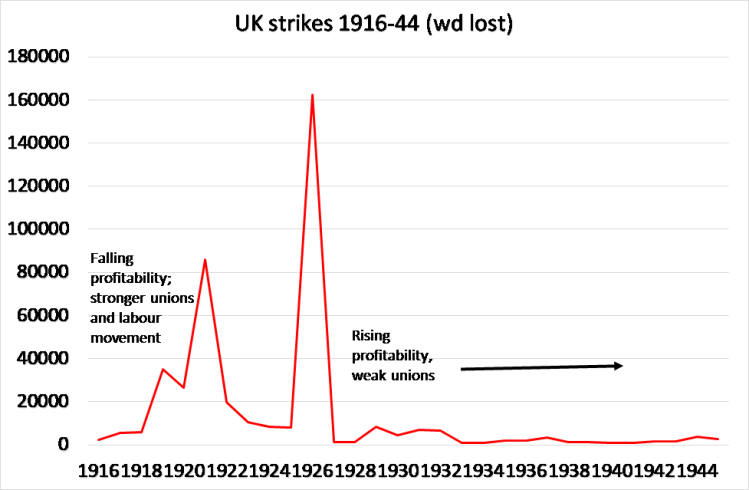 The post-1945 period started with high profitability and growth (after 1946), leading to a recovery in trade unions (in new industries).  Strikes rose a little but class struggle was generally ameliorated by concessions and wage increases.  However, from the mid-1960s, UK capital entered a long profitability crisis (as in other economies).  Capital needed to reverse this by crushing labour power.  Strong unions took on capital in the most intense class battle since the early 1920s.  Two big slumps and other neo-liberal measures eventually defeated union power and the class struggle subsided.  The neoliberal period ended in the 2000s and capitalism entered a long depression after the Great Recession.  There has been no recovery in the labour movement or class struggle (at least as measured by strike rates).

This map of the class struggle in Britain implies that only a sustained recovery in profitability in capital that also allows labour to recover its organised strength in new industries and sectors can create the conditions for intensified struggle when profitability eventually drops back again – as it will.  That suggests a generation ahead before we can see intense class struggle as experienced in the 1910-26 period or in the 1970s.  This is a similar conclusion reached by Nowak (p115).

Nowak considers two case studies of mass strike waves in the winter season of the current cycle – the Long Depression.  I presented a paper to the Society of Political Economy in Brazil last year (The rate of profit and class struggle) that also looked at the Brazil experience using macroeconomic data.  Noronha et al. (1998) conducted a study about the evolution of strikes in Brazil, identifying some key characteristics observed from the end of decade of 1970s and until the beginning of decade of 1990[i].

According to those authors, the phenomenon of Brazilian strikes began around 1978 in the main industrial area of the country and identified three major cycles of strikes: first cycle had an upward trajectory, ranging from 1978 to 1984, where the organization of unions began in Sao Paulo and spread to other regions in the country; the second cycle occurred between 1985 and 1989 and presents a flat evolution path; finally, the third cycle was characterized by a decline in stoppages after 1990.[ii]  Thus a rise in strikes matched a period of falling profitability from the mid-1970s to the mid-1980s.  Strikes flattened out with the flattening out of profitability up to the end of the 1980s. The rise in the rate of profit in the 1990s and the adoption of neo-liberal policies saw a decline in class struggle.

In Brazil, unionization rates experienced a small decline during the 1990s, yet between 2000 and 2006 this trend was reversed.[iii]  The number of strikes nearly tripled between 2002 (298 strikes) and 2012 (873) while the number of working-hours lost more than tripled in the same period. According to Brazil DIEESE’s estimates, in 2002 working-hours lost due to strikes amounted to around 116.6 million while in 2012 it was around 381.7 million.

The profitability of capital in Brazil peaked in the late 1990s and early 2000s on the measures above.  But Brazil’s labor movement strengthened in the early 2000s, so when profitability began to fall again and employers applied pressure to control the cost of labour, there was a class reaction through increased strikes.  The Great Recession did not affect Brazil’s economy severely until the commodity price boom collapsed in 2011.  The strike wave faded in the initial period of the global crash but started to rise again from 2010 – up to 2016 according to Nowak.

So it seems that class struggle (as measured by strikes) tends to be more intense in the summer ‘season’ of the K-cycle, when profitability has been falling but the labour movement and workers’ confidence has not yet been crushed.  Eventually, labour defeats and economic slumps usher in a period (neo-liberal) when class conflict is subdued.  This continues in the ‘winter’ period of low profitability and weak growth, although Nowak provides evidence that there can also be a strike wave towards the end of this period (2010-14), perhaps from new sectors of the economy that had not been in action before.

16 thoughts on “Strikes in the Long Depression”