The victory in Mexico’s presidential election of Andrés Manuel López Obrador (AMLO), under the rubric of his relatively new ‘progressive’ Morena party, is both unsurprising and surprising.  It’s unsurprising because AMLO had a huge and increasing lead in the opinion polls leading up to polling day.  And Mexico’s 88m voters (out of 127m people) have now given him the biggest win in post-war election history, with over 53% of the vote.  The candidates of the establishment parties were way behind.  For the first time, the parties of the elite and the status quo were split over who should be their standard bearer.  And the sheer anger and frustration at the state of Mexico’s economy and daily life for average citizens has swept AMLO into office. 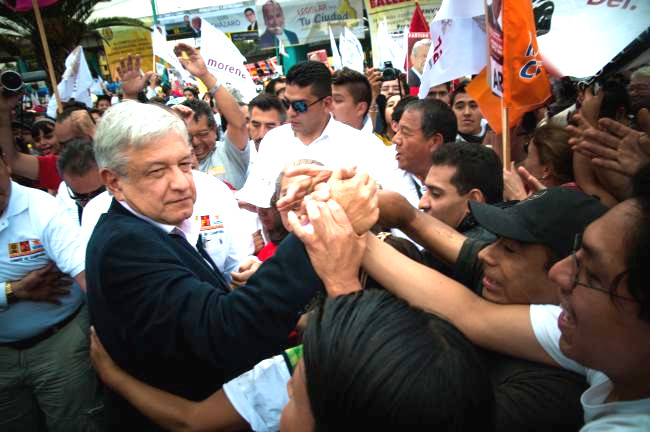 But the result is also surprising because the ruling classes’ immense power to ‘fix’ the election (as they have done in the previous ones), or to find a way to stop AMLO politically has failed.  Of course, the Mexican courts may attempt to overturn the result on alleged ‘irregularities’ but such is the size of AMLO’s victory, that such a trick will probably not succeed. AMLO’s party Morena has also gained a majority in the Mexican Congress and has won at least five of nine gubernatorial races, with the winners including Mexico City’s first elected female mayor, Claudia Sheinbaum.  But Morena is in alliance with a small extreme Christian fundamentalist party which may moderate what the new administration will do, particularly in social and ‘family’ matters.

AMLO has won because he campaigned on three key issues that enrage and engage Mexicans: rising pervasive and daily violence across the country; endemic corruption among politicians and officials; and high and rising inequality between rich and poor.

On average, someone was killed in Mexico every 15 minutes during the month of May, putting the country on track to surpass last year’s grim milestone of 29,168 killings. 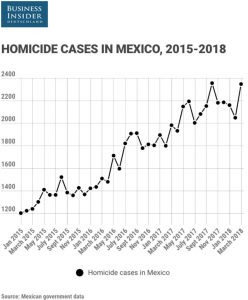 Political killings have also shot up, with 130 politicians, including 48 candidates for office, murdered since the beginning of the electoral cycle in September, according to political consultancy Etellekt.

Behind this violence lies the battle of the drug cartels, organised crime and general criminality which is often settled by assassination.  The police are either lacking in personnel or backing from the government; or both are in the league with the criminals.

Corruption is integrally linked to the massive profits made from drug trafficking and production, and other criminal activity.  Politicians of the establishment parties were up to their neck in this.  Mexico’s global corruption ranking has never been higher.

The country has been rocked by a succession of eye-watering corruption scandals, including that of Javier Duarte, a PRI governor who went awol in a government helicopter in 2016 after being accused of corruption and whose wife recently turned up living in luxurious exile in one of London’s poshest boroughs.  The government of President Enrique Peña Nieto was riddled from practically the moment he took office. His wife purchased a bespoke home from a government contractor on favourable terms. Then there was the cover-up of the horrific disappearance of 43 teachers’ college students, the use of sophisticated spyware purchased by the government to monitor journalists and human rights lawyers, while top officials embezzled public funds to pay for party electoral campaigns.

AMLO has pledged to end corruption – but how this is to be done remains unclear.  AMLO says he will allow a recall of officials in office after two years (including the presidency) and he will sell the presidential plane and only live in modest premises.

AMLO says he will stand up for the poor (over 50m Mexicans are designated as such) first over the rich.  And that is the third issue that has led to his election victory.  Mexico is one of the most unequal societies in the world in the 21st century – surpassed only by post-apartheid South Africa.  Recently the US Brookings Institution adjusted the standard measure of inequality in a country, the Gini coefficient.  The nearer the Gini is to 1, the higher the level of inequality. On its new estimates, Mexico’s Gini coefficient for 2014 rises from an already high 0.49 to a mega 0.69, close to that of South Africa, the world’s most unequal country. 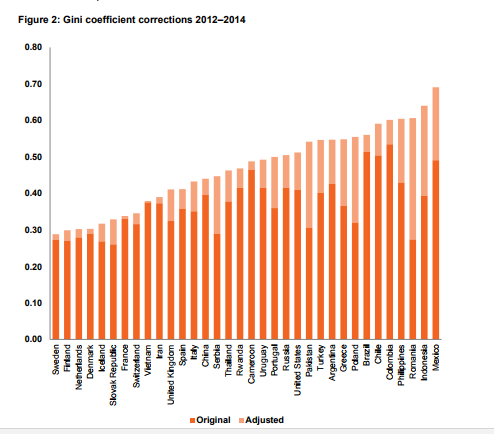 Behind the shocking story of violence, corruption and inequality lies the stagnant state of the Mexican economy.  It’s the 15th largest in the world as measured by GDP and the second largest in Latin America.  It is sufficiently advanced to be included in the top 30 OECD economies.  And yet it is in a sorry state.

The inequality is not just between rich and poor but also in the uneven development of the economy under capitalism.  Cumulative economic growth in the best-performing Mexican states reached 32% between 2007 and 2016, about double the average for Latin America.  But this is about four times the rate of growth in the low-performing states. Per capita output shows the same diverging path.

In Oaxaca and Chiapas, for example, about 70% of the population is in poverty and 23-28% in extreme poverty, according to data from the National Council for the evaluation of socio-political development (CONEVAL). 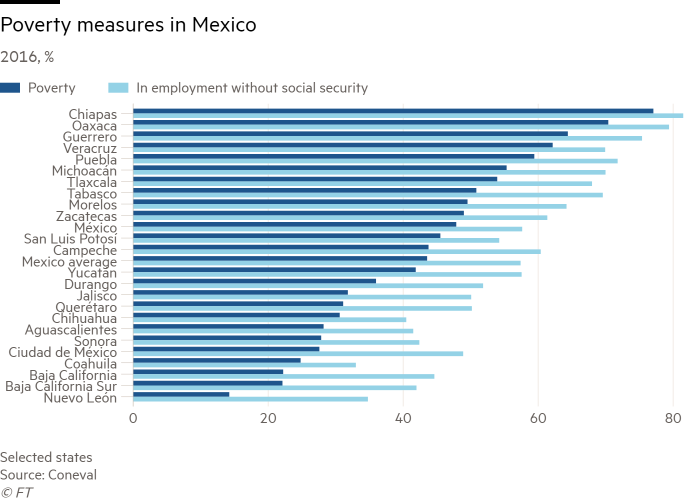 Contrary to the views of mainstream economics, the 1994 NAFTA trade deal with the US and Canada has not taken the Mexican economy forward.  Indeed, whereas the Mexican economy more than doubled to reach 16% of the US output in the 30 years to the mid-1980s, it has declined to 12% since then. 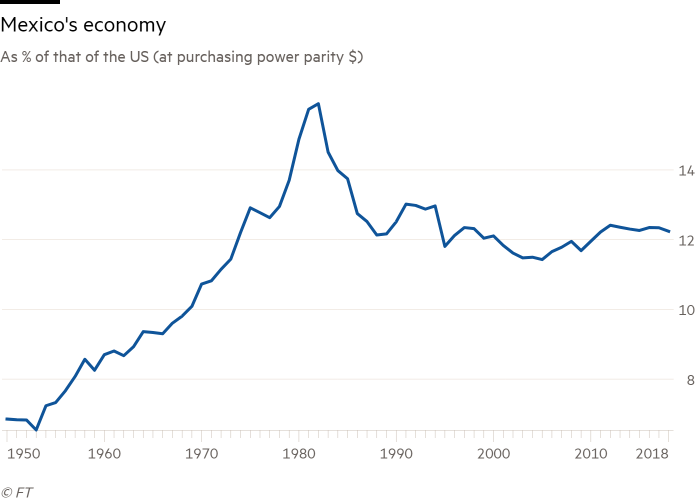 Mexico’s output per hour worked relative to that of the US is near its lowest level since 1950.

NAFTA, far from boosting Mexico’s economic performance, increased its dependence on US trade and investment, locked in the neo-liberal measures of the 1980s and increased the disparities between the faster-growing US border areas with their special economic zones and the poor southern rural regions.  And now US President Trump is insisting on renegotiating to make it even more favourable to the US!

Moreover, as the excellent report by the CEPR argues, If NAFTA had been successful in restoring Mexico’s pre-1980 growth rate, Mexico today would be a high income country, with income per person significantly higher than that of Portugal or Greece. It is unlikely that immigration reform would have become a major political issue in the United States, since relatively few Mexicans would seek to cross the border.

As a result of low profitability and investment, along with the impact of the NAFTA deal, the Mexican economy has basically stagnated.  The reason lies with the failure of Mexico’s capitalist sector.  Yes, the ‘neo-liberal period’ since the early 1980s, presided over by successive establishment, pro-business Mexican governments, did stem the fall in the profitability of Mexican capital to some extent, but it failed to turn profitability up, as was achieved in most other capitalist economies.

Slow economic growth in the post global crash period has led to a crisis in public finances as the state had to pick up the bill from the private sector’s failure.  Between 2008 and 2018, public debt grew from 21% of GDP in 2008 to 45.4% of GDP in 2018. Servicing this debt now absorbs 20% more government revenue than that allotted for health, education and poverty reduction in the federal budget. This is the burden that AMLO will inherit.

The OECD, the main promoter of neoliberal measures in Mexico, claims that “growth is set to pick up, underpinned by private consumption and exports.”  But even the OECD reckons “uncertainty (with Trump) will continue to restrain private investment”. However, “private investment could accelerate if the NAFTA negotiations end favourably.”  And it continues to demand “structural reforms” (ie neoliberal measures of government spending cuts and privatisations) “to strengthen the rule of law and improve institutional quality.” (!).

Despite the OECD’s optimism, capitalist sector investment has stagnated or fallen since the end of the Great Recession.

And that is because the profitability of Mexican capital has not recovered since the Great Recession, at least according to the net rate of return on capital data offered by AMECO.  Indeed, profitability is still some 18% below the level of 2007 and 28% below the 1997 ‘neo-liberal’ peak. AMLO’s programme is fundamentally Keynesian, using public investment to ‘prime the pump’ of private investment and claiming that money saved from reduced corruption will deliver the funding. But he is unwilling to reverse the part-privatisation of PEMEX, the state oil company or end the proposed new ‘nightmare’ Mexico City airport – only to consider ‘reviewing the contracts’. But how can AMLO turn things round on corruption, inequality and violence without control of the banks (mainly foreign), renationalisation of PEMEX and taking over the major multi-national operations within Mexico?

Donald Trump congratulated AMLO on his win.  But Mexico’s northern neighbour is now being run by a nationalist, imperialist crazy bent on launching a trade war with all and sundry.  Mexico is right in the front line of this whirlwind, with a capitalist economy that is struggling amid poverty, corruption and violence.  Nevertheless, with a huge and young population, oil and gas resources and modern industry in parts, Mexico is in a much better position to succeed than Venezuela and Cuba was.   AMLO does not take over the presidency for another five months (December).  He has major challenges ahead.

4 thoughts on “Mexico: violence, corruption and inequality – AMLO to the rescue?”