Just this week, the chief economist of the Bank of England, Andy Haldane, delivered a speech on the causes of the UK’s productivity problem.  Entitled, “The UK’s Productivity Problem: Hub No Spokes” ,Haldane returned to a familiar theme that has puzzled mainstream economics since the end of the Great Recession.  Why has productivity growth in nearly all the major capitalist economies slowed to a trickle despite the new emerging technologies and the supposed economic recovery?

In the case of the UK, this slowdown has been very severe.  As Haldane put it, UK productivity has flat-lined for a decade. Productivity is running almost 20% below its pre-crisis trend. “It is a gap it is unclear will ever be closed.” In the UK, productivity levels are as much as one-third below those in the US, Germany and France. As Haldane joked “It is the source of the oft-quoted quip that the average French worker achieves by Thursday lunchtime what the average British worker achieves only by close of business on a Friday.” 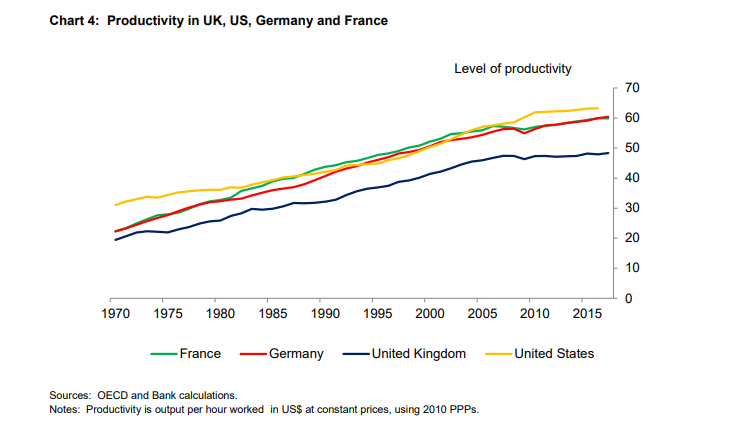 Haldane remarked that “the UK is in many respects a tale (tail) of two companies: a small set in the upper tail gazelling along the productivity high road and a much larger set in the lower tail snailing along the low road.” As Haldane recognises “Capitalism always of course throws up winners and losers, hares and tortoises, gazelles and snails, upper and lower tails”.  But it appears that in the UK, however, these differences are far-larger, and have increased by more, than elsewhere. Over the ten years to 2014, top 1% of UK companies experienced annual productivity growth of 8% and the top 0.1% companies (the huge multi-nationals) achieved growth of 12%.  The rest stagnated.  The bottom 25% of UK companies have levels of productivity around 80% or more below the UK median. Their Germany and French counterparts have productivity around 60% or more below the median, large but not as large a differential as in the UK.

It’s not a problem of so-called zombie companies, says Haldane.  Most ‘tail’ companies are not zombies, overburdened by an insurmountable mountain of debt or a broken business model. Rather they are companies surviving, but not yet thriving. And they account for fully 80-90% of all jobs. “They are not the tail; they are the dog.” If you restricted ‘creative destruction’ to true zombies – those whose productivity was negative – this would make little arithmetic difference to average productivity, raising it by perhaps 1%.

In sum, according to Haldane, the UK’s long tail problem is largely a diffusion rather than innovation problem. And this problem seems to have its roots in transfer barriers – barriers to transferring technology, know-how, people and financing – from the UK’s thriving hubs to its striving spokes. “Stronger, longer spokes are needed to reach the long tail.”

The problem with Haldane’s analysis is this ‘long tail’ pre-dates the crisis and as he says himself “thus cannot by itself explain all of the UK’s poor productivity performance since the crisis.”  In the UK, this technological trickle-down, from frontier to tail, appears to have dried up. “A lengthening flotilla of boats has remained in dry dock.”  By 2015 there were still only 13% of companies who had adopted all five of these basic technologies. And there was still a tail of 9-10% of companies who had adopted only 2 or fewer of them. Indeed, the top UK companies may have improved their productivity more than the small companies but at a slower pace since the end of the Great Recession and so overall productivity growth has slowed and fallen even further behind other capitalist economies. 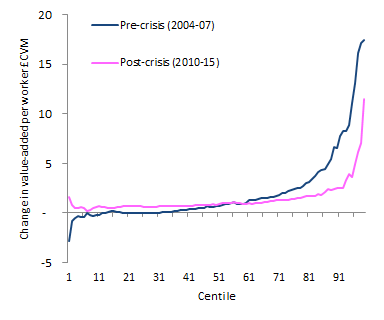 There was one phase during the 34 years of the internet and ICT revolution when US economic efficiency sharply increased. In the period leading to 2003, US annual productivity growth reached its highest level in half a century – 3.6%. This was explained by a huge surge in ICT-focused fixed investment. US investment rose from 19.8% of GDP in 1991 to 23.1% of GDP in 2000, fell slightly after the ‘dot com’ bubble’s collapse and then reached 22.9% in 2005. The majority of this investment was in ICT. After this, US investment fell, leading to the sharp productivity slowdown.

In the case of the UK, there is another particular problem: the UK is increasingly a rentier economy, relying on finance, business services and real estate.  These are unproductive activities that do not boost the productivity of labour, but do reduce available profits for productive investment.  Indeed, the relative fall-back in UK productivity compared to Germany and France etc can be particularly discerned from the early 2000s, when the oil revenues dissipated and investment increasingly went into a credit fuelled real estate boom.

A detailed sectoral analysis by the Economic Statistics Centre of Excellence has shown that three-fifths of the drop in productivity growth stems from sectors representing only a fifth of output, including finance, utilities, pharmaceuticals, computing and professional services.  The Bank of England did a similar analysis found that it is the top ones that have become the slackers. The most productive groups are “failing to improve on each other at the same rate as their predecessors did”, according to its research. The best companies still improved their productivity faster than the rest, but productivity growth among the best has sharply fallen and this has hurt the UK’s growth rate.

Investment in a capitalist economy depends on its profitability as I have argued ad nauseam in this blog.  And there is still relatively low profitability and a continued overhang of debt, particularly corporate debt, in the major economies.  In the case of the UK, the profitability of the non-financial sector is still some 12% below its level in 1997.  And in the oil sector, it has fallen 50%.

Under capitalism, until profitability is restored sufficiently and debt reduced (and both work together), the productivity benefits of the new ‘disruptive technologies’ (as the jargon goes) of robots, AI, ‘big data’ 3D printing etc will not deliver a sustained revival in productivity growth and thus real GDP.

And there is another factor, again particularly discernible in the UK: the lack of funding for smaller companies to invest in new technology.  As Haldane explains, new, ‘upper tail’ UK companies can attract venture capital finance. The UK has a large and liquid corporate bond market, totalling around £500 billion for investment grade securities, which allows larger and better-established companies to raise money at long maturities in capital markets.  But for the rest, it is much more difficult. Lending to the corporate sector by UK banks, at 6% of their assets, is around one third of the equivalent by German banks. In relation to GDP, bank financing of companies is around half that in Germany. The UK’s national development bank (the British Business Bank) has assets that are a small fraction of its German counterpart (KfW).  The big five banks in the UK do not help smaller businesses to invest but prefer to speculate in financial assets.

That makes the idea presented in a recent report by the UK’s Labour Party suggesting the Bank of England set a target for 3% productivity growth in its policy actions ridiculously utopian. The BoE has no real control over the lending policy of the commercial banks and no control at all over the investment actions of the major UK companies. Without such control, the 3% productivity growth target is just a dream.  To achieve it would require public ownership of the major financial institutions and the top 1% of UK companies (as Haldane has referred to them).

Compare the inability of the BoE to manipulate the UK capitalist economy with the power that China’s monetary authorities have.  Last weekend, the People’s Bank of China cut the reserve requirement ratio, the amount of cash that banks must hold in reserve at the central bank, freeing up Rmb700bn ($106bn) for new lending and investment.  Over the last 18 months, China’s central bank has been reining excessive lending by local authorities and ‘shadow banking’.  This has been achieved “even as growth remained surprisingly resilient” (FT).

Now the authorities are gradually preparing to reverse that policy as the trade war with the US rears its head and with a possible hit to China’s growth.  China’s authorities have the power to launch a massive investment program, as they did in the Great Recession, to sustain growth and productivity (which is motoring) because the state controls the banks and commanding heights of the economy.  That power does not exist for governments in the major capitalist economies.  In those economies, profitability rules and productivity stagnates.

13 thoughts on “The productivity puzzle again”