The zombies arrived at the G20 meeting in Hamburg this weekend – and I don’t mean the G20 leaders but a group called Gestalten, who dressed as zombies and walked through the streets.  The group said they wanted the G20 to stand for a more open, egalitarian society, rather than power in the hands of the few; and wanted to send a symbol of solidarity and political participation out to the world. 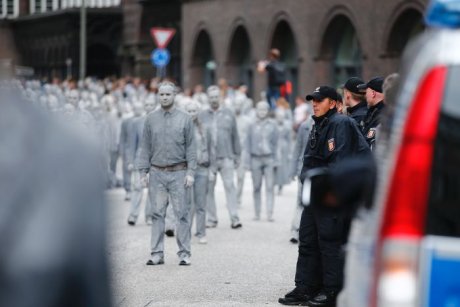 There was little sign of solidarity among the leaders of the capitalist world in Hamburg.  US President Donald Trump, after flying in to see the right-wing president of Poland (as a snub to Putin?), made it clear, in his own peculiar way, that the US would not return to the Paris Accord on climate change and would resist any G20 statement that committed the US to open and free trade.  Indeed, Trump is considering imposing tariffs on EU steel products.

Globalisation, as the leaders of capitalism and big business have come to expect and enjoy, is now under threat from nationalism and protectionism. Then there is the growing political crisis hot spots of North Korea and the Middle East on which the G20 leaders have no clear policy or solution.

But maybe there is one bright spot for capitalism – a seeming improvement in the world economy at last, after six to seven years of depressed economic growth, investment and incomes since the end of the Great Recession in 2009.

As the IMF put it in its last update on the global economy: “The good news is that the world economy is gaining momentum as a cyclical recovery holds out the promise of more jobs, higher incomes, and greater prosperity going forward.”  However, there were caveats: “the world economy may be gaining momentum, but we cannot be sure that we are out of the woods….there are clear downside risks: political uncertainty, including in Europe; the sword of protectionism hanging over global trade; and tighter global financial conditions that could trigger disruptive capital outflows from emerging and developing economies.”

Nevertheless, there appears to be economic recovery in most parts of Europe.  Average real GDP growth in the Eurozone is now heading for 1.5% a year, with Scandinavia and Eastern Europe growing even faster.  The US economy is showing signs of wear and tear, but still manages about 2% a year.  Japan trundles along at about 1.5% a year.  China too, after the mainstream doommongers predicted collapse, continues to expand at about 6.5-7% a year.  Even the some of the major so-called emerging economies like Brazil and Russia appear to be coming out of the slumps they have suffered in the last 18 months.

Global profits seemed to have picked up in recent months after heading into negative territory.  This recovery is driven by improvement mainly in China and Japan. 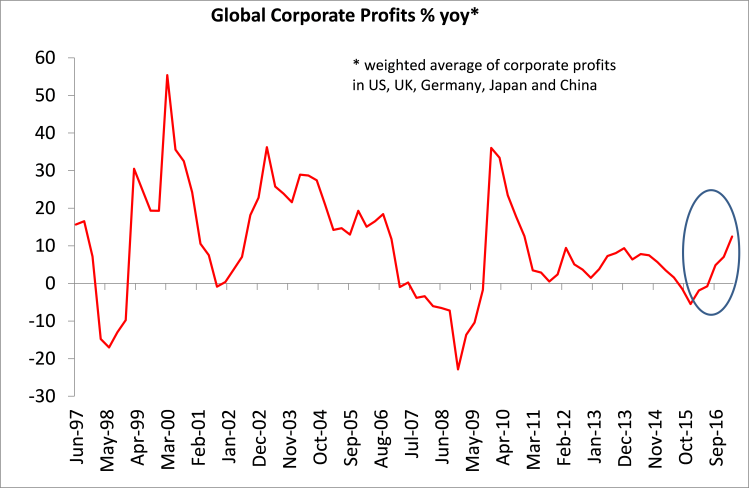 This has made some mainstream economists (JP Morgan) more confident that the Long Depression may be over.  Recovery and sustained faster growth may be coming soon, led by improved business investment. 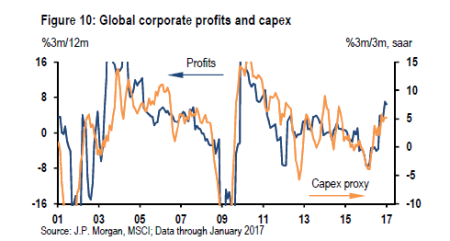 Only the UK, of the major economies, seems to be heading downwards.  After the decision to leave the European Union (Brexit), companies have stopped investing and capital flows through the City of London have dropped off.  The latest real GDP data for the first quarter of 2017 showed that the UK economy grew only 0.2%, the lowest rate of growth in the whole of Europe, including Greece!  Industrial output is falling outright and business investment is flat.

The average UK family faces the tightest squeeze on real incomes for five years, as real disposable income per head fell 2% in the first quarter of 2017. Indeed, according to a new report by the Joseph Rowntree Foundation, a family of four (two working adults and two children) requires “at least” £40,800 a year to manage and on average, and such a family in the UK is falling short of that by about £3000.

And all is not entirely rosy in the US too.  The latest monthly jobs data for June showed a further rise in employment, but also a turn up in the unemployment rate for the first time in years.  That suggests employment has peaked.  Wage growth remains subdued at just 2.5% a year and, after inflation, average incomes are crawling. Above all, profits in the productive sectors of the US economy are falling.

The return on equity in the US stock market is at an all-time low – that’s a sign that stock prices are way out of line with earnings (profits) being made by US companies.

The bond yield curve is flattening because the US Federal Reserve seems committed to increasing its policy rate that sets the floor for all interest rates for borrowing in the US and often overseas.  This means the cost of borrowing to spend in the shops or to invest in business expansion will rise.  In the minutes of its last meeting, the Fed members are ready to hike rates further even though inflation is not rising, on the contrary, and wages are hardly rising.

As one American hedge fund manager put it: “I don’t see anything different from what the Fed has been saying already. The economy continues to be okay. It’s not overheating  or under-heating. The implicit message is that we are on track to raise interest rates and to shrink the balance sheet, not because the economy is overheating but we want to normalise monetary policy.” But if the Fed continues with this policy, it could well increase downward pressure on corporate profits and investment.  There are already signs that borrowing costs have risen in Asian economies.

Moreover, the underlying reasons for doubting the optimism of the G20 leaders and hedge fund bosses on the world economy are that none of the key causes of low productivity growth and investment have been dealt with.  In its latest report on the US economy, the IMF cut its growth forecasts to 2.1 percent in 2017 and 2018, dropping its assumption that the Trump administration’s tax cut and fiscal spending plans would boost growth. Far from accelerating, the US economy continues its sluggish crawl – at best. While the Trump administration built-in growth projections of 3 per cent by 2021, the IMF sees US growth subsiding to an underlying potential rate of 1.8 per cent by 2020.

Productivity growth in all the major economies continues at historic lows.

While real GDP per head is still well below levels before the Great Recession, inequality of incomes and wealth within the major economies remains at record highs – indeed still rising.

And world trade volumes remain some 25% below peaks before the global financial crash. 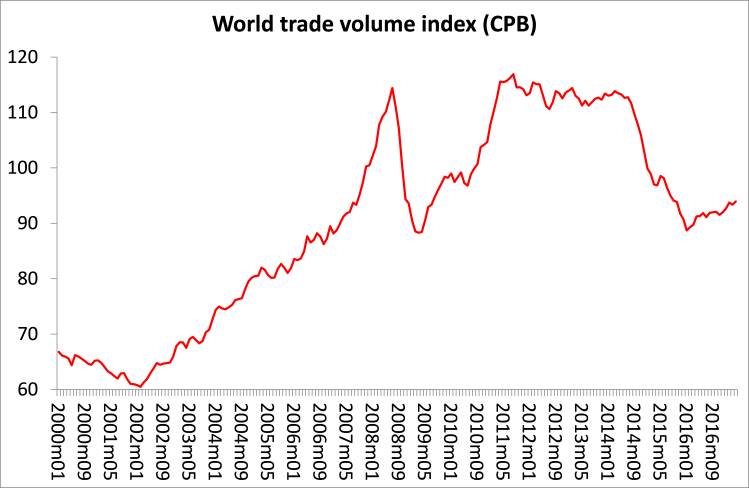 The world economy still seems to be zombie-like, even if there is some optimism that the walking dead may be coming to life.

5 thoughts on “A zombie world”