I’m always banging on about the close connection between the movement of investment (expenditure on the means of production) and economic growth.  In my view, the evidence is overwhelming (The profits-investment nexus) that it is investment that is the main swing factor in booms and slumps, not personal consumption as many Keynesians focus on.  And it is also a key factor in the long-term growth of labour productivity.

A new analysis by the Levy Forecasting Center, an institute that follows closely the views of Keynes, Kalecki and Hyman Minsky, also confirms this view.  The report comments that “unsurprisingly, net fixed investment is strongly related to growth.” 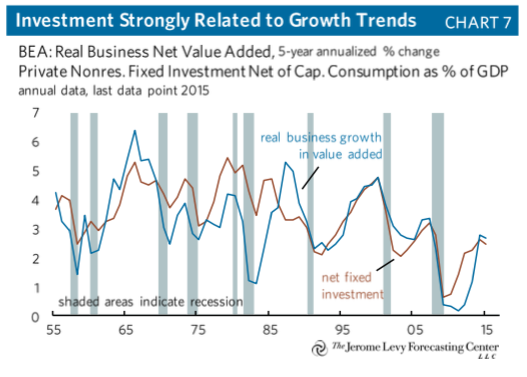 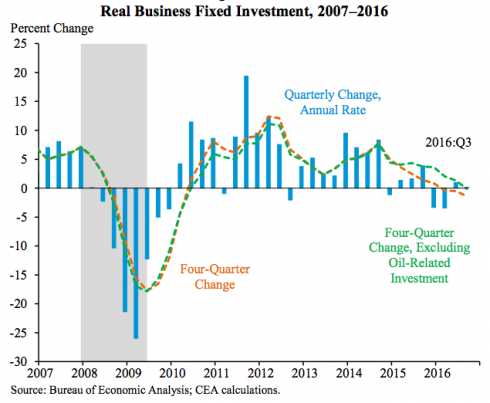 Business investment in the US has ground to a halt and the age of the existing means of production has risen as ageing equipment and technology is not replaced. 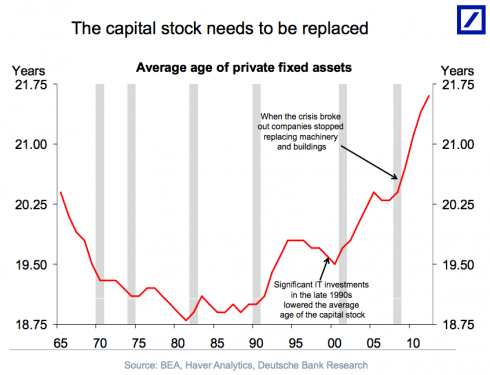 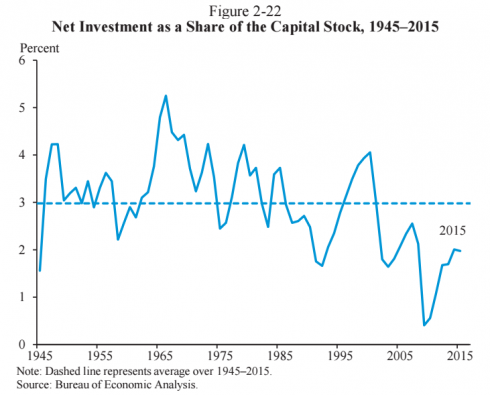 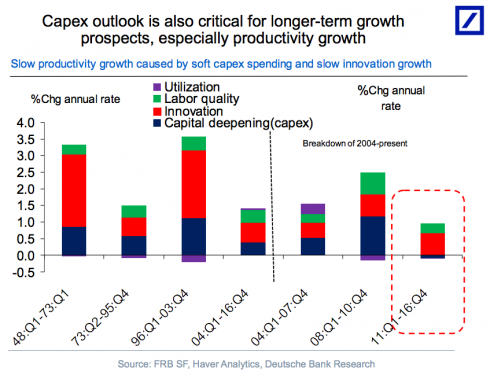 This is close to the argument of the Keynes-Kalecki thesis (espoused by the Levy Institute) that it is investment that creates profit, not vice versa. This nonsensical view should be countered with the realistic one that is the movement in profitability and profits that moves business investment.  And as I and others have shown empirically, this is what happens in a capitalist economy.

For example, Andrew Kliman and Shannon Williams have shown that the fall in US corporations’ rate of profit (rate of return on investment in fixed assets) fully accounts for the fall in their rate of capital accumulation.  And they conclude that “Since a long-term slump in profitability, not diversion, is what led to the trend towards dis-accumulation, it is unlikely that the trend can be reversed in the absence of a sustained rebound of profitability”.

Indeed, if we delineate the rate of profit in the non-financial productive sectors of the economy, we find that profitability has struggled to rise since the 1980s and so along with it, business investment growth has slowed.  Anwar Shaikh, in his latest book, Capitalism, adjusts the official data for measuring the US rate of profit and shows that profitability has stagnated at best since the early 1980s, rising to a modest peak in 1997 before slipping back to a post-war low by 2008. 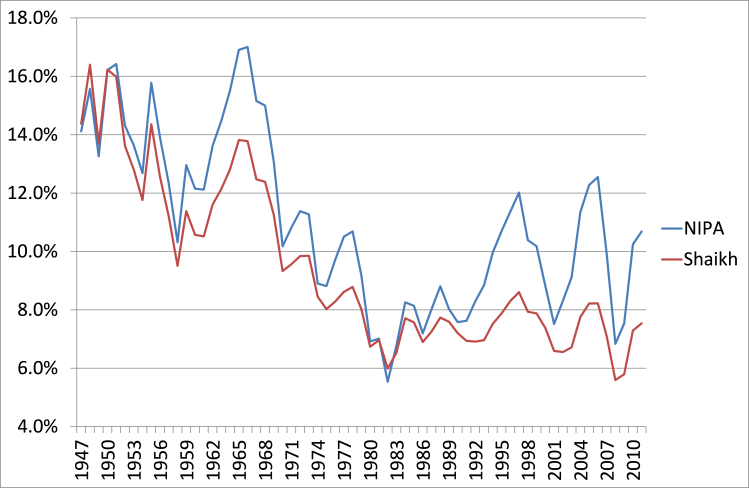 Similarly, Australian Marxist economist Peter Jones has shown that if the ‘fictitious’ components of profitability are removed from the calculation of the US corporate rate of profit, then the ‘underlying’ rate of profit has never been lower (http://gesd.free.fr/jonesp13.pdf).  Profitability of productive capital consolidated during the 1990s but then dived to post-war lows just before the Great Recession, with little recovery since.

The US rate of profit (excluding ‘fictitious profits’) % 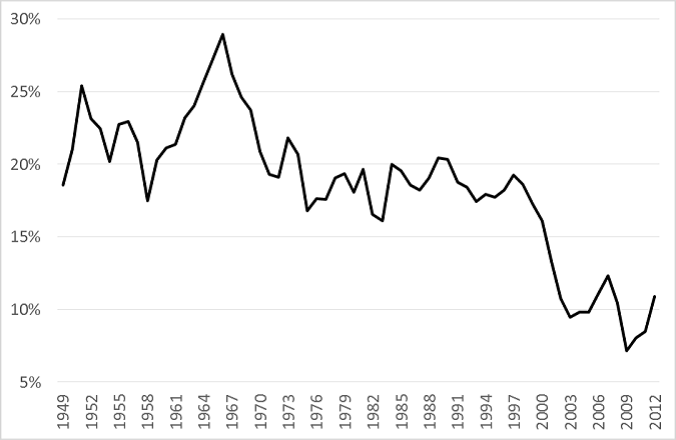 The Levy analysis also makes the valid argument that high corporate debt is impeding new investment.  Non-financial corporate sector debt relative to ‘value-added’ (i.e. sales revenue) is at a historically high level and this is weighing on capital spending. 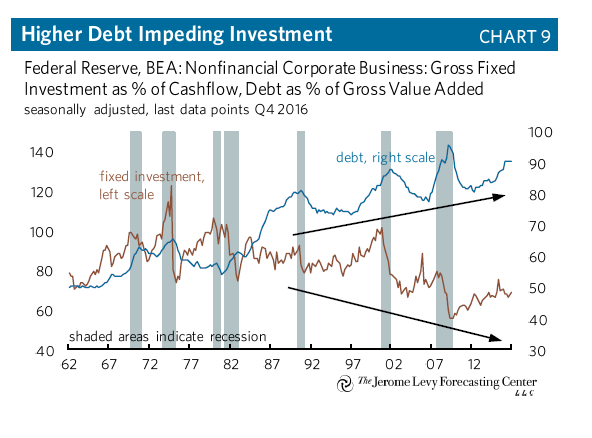 US business investment in the first quarter of 2017 had a slight uptick after falling for four quarters. That followed a return to positive territory for corporate profits in the second half of 2016 after going negative in early 2016. 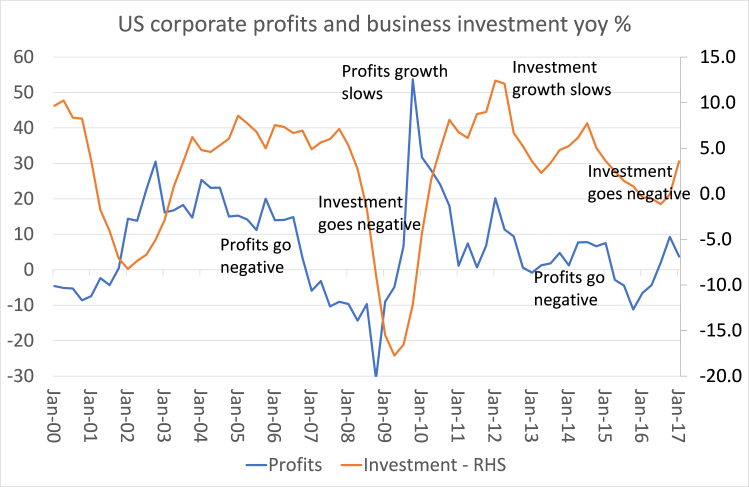 Does this mean that investment and economic growth is set to pick up finally?  Not according to Levy.  Levy interestingly (in opposition to its own Kalecki thesis) note that “looking back, the capex decline in 2015-16 and the subsequent rebound lagged the profits decline and recovery.”  But Levy reckons that the “corporate profits recovery is likely to stall by mid-year and capital spending will follow with a lag”.  If that happens, the US economy will be heading down, not up, by the end of the year.

75 thoughts on “Investment, profit and growth”