After Donald Trump delivered his first presidential address to the US Congress, the American stock market hit yet again a record high.  Since he was elected, the stock market is up over 11%.

The buoyant mood in the market for financial assets is also being mirrored in the views of the top financial analysts.  “There’s no question that animal spirits have been unleashed a bit post the election,” remarked New York Federal Reserve President William Dudley, echoing the terms of Keynesian economic thinking that economies take off when entrepreneurs feel optimistic about future sales.

And the main economic indicators in the US and global economy have been picking up.  The purchasing managers’ indexes (PMI) are surveys of companies in various countries on their likely spending, sales and investments.  And the PMIs everywhere are well above 50, meaning that more than 50% of the respondents are seeing improvement.  The global PMI now stands at its highest level (54) for three years and, according to JP Morgan economists, it suggests that global manufacturing output is now rising at a 4% pace compared to just 1% this time last year. 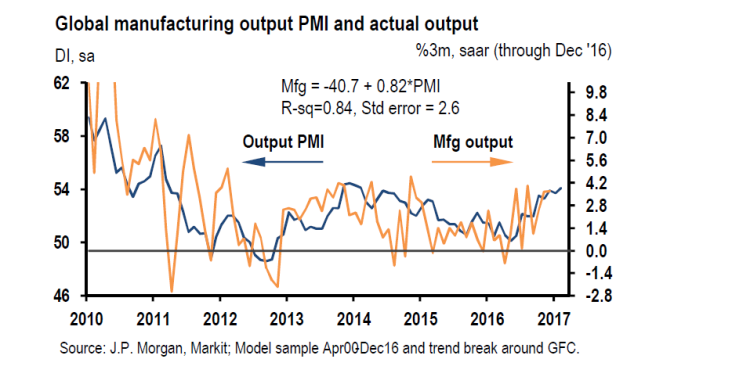 US manufacturing PMI hit its highest level for two years. 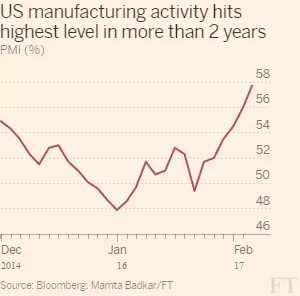 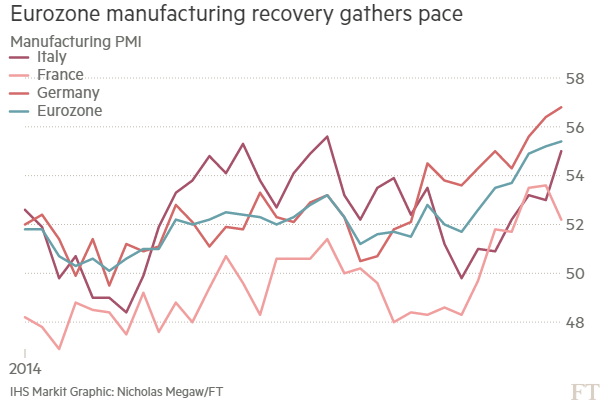 Things are also looking better in the so-called emerging economies.  China has not crashed as many expected this time last year.  On the contrary, the Chinese economy has picked up and, as a result, there has been increased demand for raw materials.

Iron ore prices have rocketed back up, enabling the Australian economy to avoid a recession.  In the last quarter of 2016, the Aussie real GDP grew by 1.1 per cent, the strongest rate of quarterly growth over the past five years (although annual growth in 2016 was 2.4%, better than most other advanced economies, but lower than average).  India too recorded a pick-up in GDP growth to over 7%.

So good are things looking that Gavyn Davies in the FT sarcastically attacked those economists who have been talking about ‘secular stagnation’ in the major economies.  “Whatever happened to that?”, says Davies, pointing out that “Global activity growth has rebounded sharply, and recession risks have plummeted. Growth in real output is now running at higher levels than anything seen since the temporary rebound from the financial crash in 2009/10. Importantly, recent data suggest that the growth rate of fixed investment is beginning to recover, which is a body blow to one of the central tenets of the secular stagnation school.”

According to the Institute of International Finance, an industry association, growth in GDP across emerging markets surged to an average of 6.4 per cent in January, its fastest monthly rate since June 2011. If confirmed, this will show emerging economies reversing a downward trend in growth that has been in place since the global financial crisis.

Behind this apparent recovery is a small recovery in corporate profits, which up to the middle of 2016 had been slowing fast.  Since then, corporate profits have recovered somewhat around the world and,.according to JP Morgan, business investment has reversed its decline of the last year.

Investors have responded.  Flows to emerging market equity and bond funds have begun the year positively for the first time since 2013. Foreign investors withdrew more than $38bn from EM stocks and bonds in the last three months of 2016 but sent more than $12bn back to those markets in January, the IIF estimates.

Even world trade growth, which has been abysmal and stopping rising altogether at the beginning of 2016, rose 2% at the end of last year (but still way below 3-4% rate in 2015).

So it would seem that the ‘Trump rally’ in stock markets is being accompanied by stronger economic growth and an end to the risk of deflation and stagnation.  Indeed, it is now expected that the US Federal Reserve Bank may well be confident enough to decide to raise its policy interest rate again this month, having stalled on its planned hikes after December.

But as I have argued before in previous posts, financial markets and mainstream economists may be getting ahead of themselves.

Is the US economy really going to leap forward from its sluggish pace of 2% or less that it has achieved since 2009?  Indeed, revised data for US real GDP growth in the last quarter was just 1.9% year over year, actually below the average growth rate since the end of the Great Recession.

It is no accident that the wild claims by Trump that his policies would lead to the US economy soon growing at a 4% rate have already been watered down.  Barely a month into Trump’s presidency, his advisers have already downgraded that rather elevated forecast. Steve Mnuchin, Trump’s recently confirmed Treasury secretary who is a former banker at Goldman Sachs, substantially downgraded the Trump’s goal for economic growth to just 3%.  And the Federal Reserve has proved to be wrong repeatedly in its forecast of faster economic growth.

Moreover, business investment growth slowed to a trickle. Investment badly needs a boost if the US economy is to sustain any significant growth rate, let alone the claimed 3-4% target of the Trump administration.  With business investment so weak, US economic growth is not going to accelerate unless corporate profits leap forward and government investment steps up to the plate.

Business investment contributed just 0.17 percentage point to GDP growth in the last quarter of 2016, while government investment has collapsed.

That, of course, is the Trump plan (such as he can explain it), namely to cut corporate taxes to raise after-tax profits and to introduce an infrastructure investment programme.  We shall see.  But corporate profit margins (profit per unit of sales) are not rising but narrowing and the fiscal multiplier effect of any Trump government investment stimulus is likely to be small.

There has been little sign of a recovery in real GDP per person in the US since the Great Recession – on the contrary – and that is the real indicator of (average) economic success. 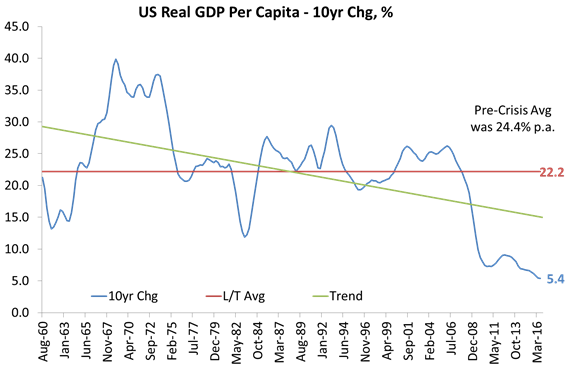 And what happens in the US has a profound influence on the rest of the capitalist world.  There is a close synchronisation of growth rates between the US and the rest of the world economy. Recent research indicates that the US appears to influence the timing and duration of recessions in many major economies.  Estimates indicate that a percentage-point increase in US growth could boost growth in advanced economies by 0.8 of a percentage point, and in emerging market and developing economies by 0.6 of a percentage point after one year.

As I have pointed out before, the US stock market is looking ‘overvalued’ and liable to a crash. 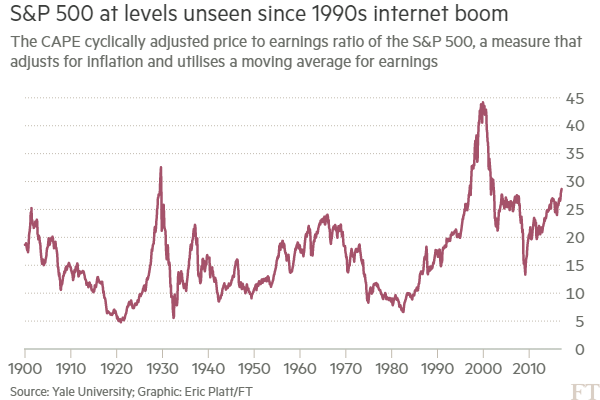 As I have argued before, the key indicators to tell you if the US and world economy is starting to grow faster or is slipping back are the movement of profits and investment.  In the last half of 2016, corporate profits moved back into positive territory.  To finish off the batch of graphs in this post, here is my measure of global corporate profit growth up to end-2016. 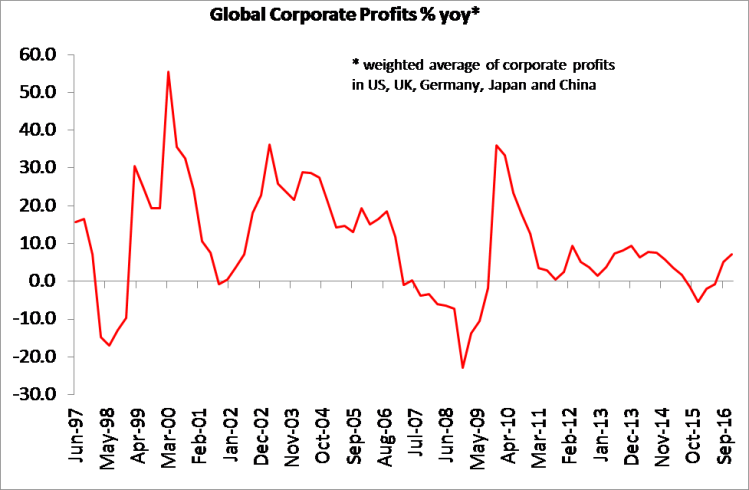 Where this graph goes in 2017 is crucial to an analysis of the future.