The main headline news from the UK’s annual government spending review is that the British Conservative chancellor George Osborne has done a U-turn on his previous plan to cut what are called tax credits that supplement the pay of the poorest working families.  The planned cuts in these ‘credits’ were part of the aim to cut another £12bn off the already huge cuts in welfare spending that the Conservatives have made.  This backtracking by Osborne is a victory for the campaigning of the left-wing Corbyn-McDonnell Labour opposition leadership.  If the so-called moderates were still the leaders of Labour, there would have been no fight at all.

This U-turn means that the government will exceed its own self-imposed ‘cap’ on welfare spending for the next three years.  But, as shadow chancellor John McDonnell has pointed out, cuts in income to the poorest working (not unemployed) families are still in the pipeline.  That’s because the Conservative government plans to introduce what it calls ‘universal credits’ to cover all sorts of benefits in two years and phase out tax credits.  The new credits will pay out much less.  Working families will lose so that the government can meet its ludicrous target of ‘balancing the books’ on the government budget by 2019.

The irony is that, despite all the measures of austerity imposed by the Conservatives since they came into office in 2010, they still cannot get the government deficit down in cash terms and are way behind their original targets for annual deficits as a share of GDP. 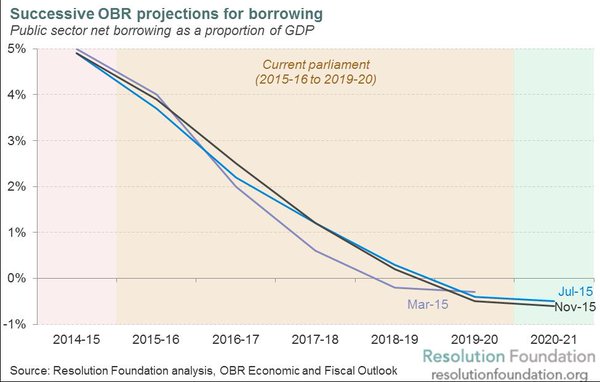 That’s because of two things.  The government has reduced taxes so much for the rich and for corporations that the tax returns have just not met targets.  And the UK economy has grown much more slowly since 2010 than forecast, so tax revenues have grown more slowly.  This has forced the government to keep on cutting government spending to try and get the annual deficit down and stop the public debt to GDP ratio from rising.

Forced to maintain spending on health and education (although as share of GDP they will fall), the government is imposing huge cuts in other public services: transport -37%, agriculture -15%, justice -17%, culture -22%.  In this spending review, the government also announced an increase in ‘defence’ spending and a little more on health, although it wants £25bn in ‘savings’ from the health service over the next four years – ludicrous as the population rises and gets older.

The Chancellor boasted that by the end of this parliament in 2020, government spending will be only 36% of GDP, making it the lowest ratio among advanced economies, excepting Switzerland and Australia.  This is a marker for how anti-state spending this government is and how pro big business it is.

The Chancellor has been lucky in that interest rates remain very low, keeping the cost of servicing public debt low. But it is also fudging projections for future tax revenues, claiming that the UK economy can grow at about 2.4% a year for the next four years. He is hoping to reach his 2020 budget target by cutting spending less than previously planned now in order to impose larger spending cuts and tax increases later. And there are new taxes: increased local government tax, a tax on buying homes for renting out, a levy on employers to pay for apprenticeships and the introduction of loans for grants for nurses and other students.  Nurses will now have to pay for their qualifications training and then get low pay and long hours.

But if global interest rates rise with the start of Fed hikes and a global recession returns and stops the UK economy in its tracks, then even these revised budget projections will turn to dust.