In a recent article (http://www.bloombergview.com/articles/2015-02-11/what-we-know-about-recessions-might-be-wrong), Noah Smith pointed out that “Modern macroeconomists think that recessions and booms are random fluctuations around a trend. These fluctuations tend to die out — a deep recession leads to a fast recovery, and a big expansion tends to evaporate quickly. Eventually, the trend re-establishes itself after maybe five years. No matter what happens — whether the central bank lowers interest rates, or the government spends billions on infrastructure — the bad times will be over soon enough, and the good old steady growth trend will reappear.”

“But what if it’s wrong?” says Smith, “What if recessions deal permanent injuries to an economy”. Smith pointed out that right-wing economists have criticised the idea that after every recession comes a boom. Greg Mankiw (see my post, https://thenextrecession.wordpress.com/2013/06/19/defending-the-indefensible/), back in 2009, reckoned that the Great Recession would herald a lost decade of output as major economies failed to get back to the trend growth rate before the crisis.

Ironically, as Smith says, liberal Keynesian economist, Paul Krugman, was among the optimists. He was wrong and Mankiw was right. Of course, Keynesians do have an answer to why economies don’t bounce back after a deep recession. I have described their arguments in various papers and posts (https://thenextrecession.wordpress.com/2013/11/20/a-keynesian-or-marxist-depression/).

Smith brings to our attention one such Keynesian answer from Roger Farmer, Professor of Economics in Los Angeles. I have referred to his work before (https://thenextrecession.wordpress.com/2010/06/02/the-keynesian-answer-support-the-speculators/). Farmer reckons that economies are driven by “animal spirits” i.e. bursts of enthusiasm and depressions by capitalists to invest or not. Apparently, all can be explained by the view that capitalists are really suffering from you could call a ‘bipolar syndrome’. As Smith puts it: “A burst of pessimism can knock the economy from a good equilibrium into a bad one and it can then stay there until a burst of optimism comes along to knock it back.” So, reckons Farmer, governments must step in to provide some stability to this fragile capitalist mentality.

Farmer’s policy prescription is for governments and central banks buy up the stock market so that capitalists will be so pleased with this that they will start investing. Well, stock markets round the major economies are at record highs, thanks to cheap money injected by central banks – and yet the world economy remains in sluggish mode and some parts, like Japan and southern Europe are in ‘permanent recession’ or depression.

Another right-wing economist has complained that the Keynesians are far too optimistic about capitalist economies recovering with a judicious bit of central bank quantitative easing and government spending. John Taylor is also a West Coast professor and makes the point that the US economic recovery has never been so weak, even worse than the recovery after the deep double dip recession of the early 1980s (see graph below) – and the US economy is doing the best out the major advanced capitalist economies (https://thenextrecession.wordpress.com/2012/09/03/bernanke-in-a-hole/.) 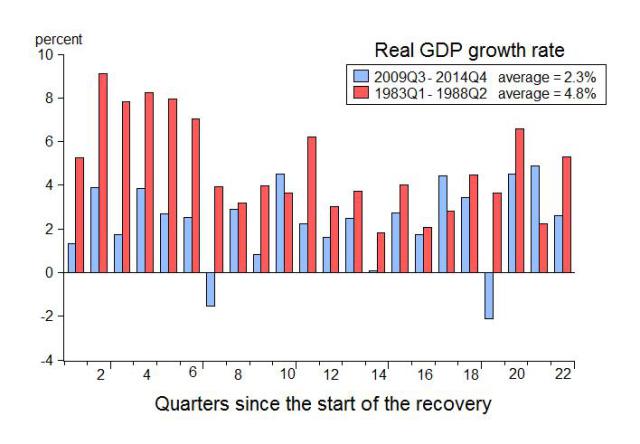 The latest US GDP figures revised just yesterday for the fourth quarter of 2014 show that average growth since 2009 has been just 2.2% a year compared with 4.4% in the corresponding quarters of the 1980s recovery. And as of January 2015, the employment-to-population ratio is still lower than at the start of the recovery.

Both Mankiw and Taylor make these arguments because they want to score points against the Obama administration and the Keynesian economists who reckon that the government must intervene to help the ‘bipolar’ capitalist sector. Their argument is that ‘intervention’ just makes things worse. Better to let capitalism cleanse itself of dead capital, keep corporate taxes low and maintain ‘normal’ interest rates. But this ‘liquidationist’ approach does not work either.

In a new paper, David Papell and Ruxandra Prodan, Professor of Economics and Clinical Assistant Professor of Economics, respectively, at the University of Houston, find that deep recessions after a financial crash can take up to nine years before growth returns to trend. But this time it is different – it’s even worse (http://econbrowser.com/archives/2015/02/guest-contribution-long-term-effects-of-the-great-recession).

Looking at the latest projections of the US Congressional Budget Office (CBO), they reckon that US real GDP will never return to its pre-Great Recession growth path. “The projected decrease in potential GDP is unprecedented, as almost all postwar U.S. recessions, postwar European recessions, slumps associated with European financial crises, and even the Great Depression of the 1930s, were characterized by an eventual return to potential GDP.” US real GDP will permanently be 7.2% below the pre-Great Recession growth path because trend real GDP continued to rise during the recession. They call this a “purely permanent recession”.

But as readers of this blog will know, I characterise this as a Long Depression, a rare event in capitalism. The CBO reckons that the US trend growth rate will slow to just 1.7% and will never be above 2% a year for the foreseeable future! Why is capitalism locked into a depression? Well, mainstream economics has debated this, swinging between two causes for this ‘secular stagnation’: permanently lower productivity growth and innovation (Robert Gordon) or too high rate of interest or too low ‘animal spirits’ (Larry Summers) – see my post (https://thenextrecession.wordpress.com/2015/01/09/assa-part-two-permanent-stagnation/).

In another paper just out, three economists find that long-run US real GDP growth has been declining for some time and the main reason is a slowdown in the growth of the productivity of labour (http://www.voxeu.org/article/tracking-gdp-when-long-run-growth-uncertain). Capitalists are failing to boost productivity growth enough through new technology. 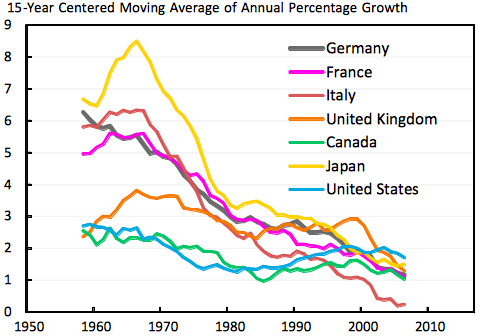 And two more economists show that worker productivity in the major economies has been persistently weak since the onset of the global crisis (http://www.voxeu.org/article/labour-productivity-and-global-crisis-historical-perspective). “We find that persistently weak productivity is not normally a feature of financial crises in advanced economies – this time has been different. Looking sector by sector, the biggest falls in most countries have been in manufacturing. The UK stands out in having also seen a dramatic fall in service sector productivity growth, now one of the slowest in our sample of countries.”

It seems that capitalism is now in a permanent bipolar disorder – a long depression.