The US GDP revised data for the third quarter of 2014 came out today. US economic growth was revised up from a 3.5% annual pace to 3.9%. The US economy had expanded at a 4.6% rate in the second quarter. So it has now experienced the two strongest back-to-back quarters of growth since the second half of 2003.

This was the fourth out of the past five quarters that the economy has expanded above a 3.5% pace, although bear in mind that the economy contracted during the first quarter after a ‘bad winter’. So year-on-year growth, a much better guide to the pace of expansion was up only 2.4% in Q3’2014, actually a slight slowdown from Q2 yoy growth of 2.6%.

However, that may not last. What was also to be found in the revised data were the first figures for corporate profits in Q3. Corporate profit margins, the difference between what businesses charge per unit of production and their costs per unit, reached a record high, at 15.6% 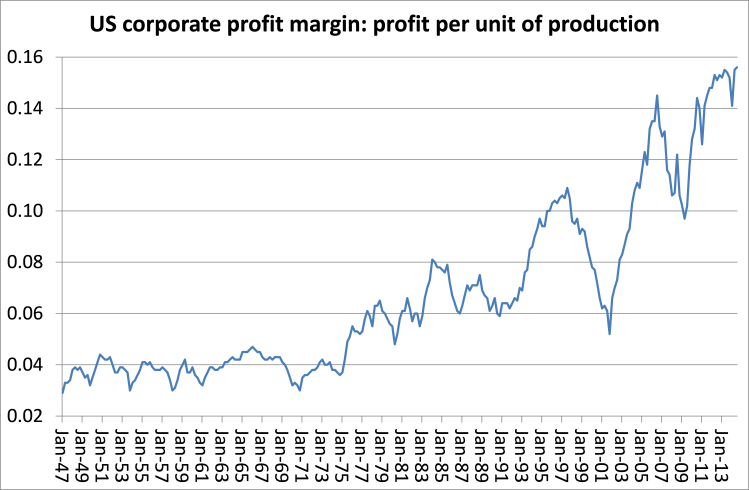 But corporate profits as a whole have virtually stopped rising, up only 0.4% year-on-year in Q3’2014, while after-tax profits are contracting and have been throughout the year.

It is my argument in previous posts and papers that where profits go, business investment will eventually follow and then economic growth and employment. The relatively strong US real GDP growth figures announced today are backward looking. Profits call the tune for the future and they are now stagnant (before tax) and falling (after tax). If we lag the change in business investment (blue line) by a year behind the change in profits (red line), then it looks like this.

The graph suggests that business investment growth is likely to contract and disappear during 2015, if corporate profits stay stagnant or contract further.

8 thoughts on “US GDP up but…profits down”