As I forecast in the previous post
(https://thenextrecession.wordpress.com/2014/07/08/slowing-global-growth-and-the-capitalist-future/),
the International Monetary Fund (IMF) has lowered its 2014 forecast for global economic growth.  The IMF now says world real GDP will rise only 3.4% this year, 0.3% points below what it predicted in April. But, of course, as it has done in very report, it reckoned growth would speed up to 4%.  It’s always jam tomorrow.

This rate of real GDP growth of 3-4% a year for the world economy is well below the average growth rate before the Great Recession, confirming the view that the major capitalist economies remain in what I call a Long Depression.  The IMF moaned that “robust demand momentum has not yet emerged despite continued very low interest rates and easing of brakes to the recovery, including from fiscal consolidation or tight financial conditions”.

This slow growth is no longer confined to the major advanced capitalist economies, as the so-called BRICs (Brazil, Russia, India, China and South Africa) are slowing too.  The advanced economies will grow just 1.8% this year (up from 1.3% in 2013) and supposedly accelerate to 2.4% in 2015.  But real GDP growth in the emerging economies will slow marginally this year to 4.6% from 4.7% in 2013, with the hope of a pick-up to 5.2% in 2015.  This includes China, which is growing at 7.4% this year.

After a terrible first quarter, the US economy will grow only 1.7% this year, although the pace is expected to pick up for the rest of this year.  The Eurozone economies remain weak with average real GDP growth for the region barely above 1%.  Japan will grow at just 1.6%.

IMF chief economist and sometime Keynesian, Olivier Blanchard, summed the IMF’s view: “In short, the recovery continues.  But it remains weak and is still in need of strong policy support to strengthen both demand and supply…Advanced economies are still confronted with high levels of public and private debt, which act as brakes on the recovery.” So what was the answer? Blanchard called on governments to boost public investment to turn the global economy round. 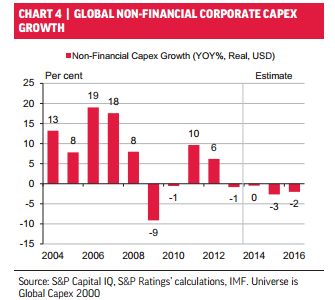 And yet public sector investment is being slashed as the easiest way of meeting the demands of fiscal austerity. 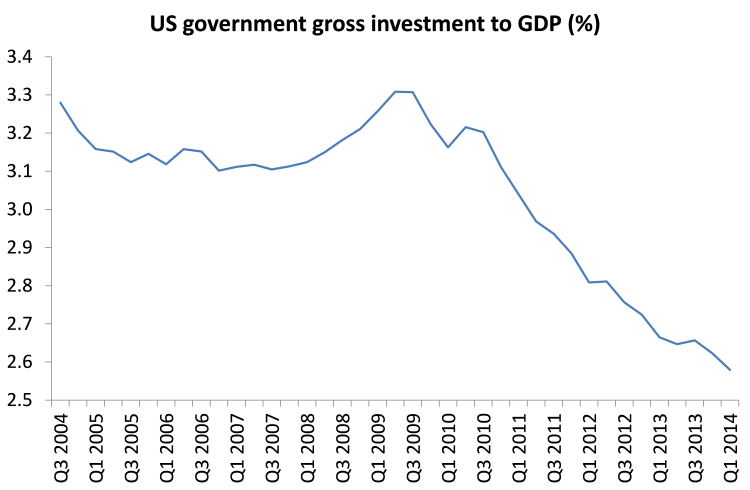 If more public investment is the answer to faster growth then it ain’t going to happen.

Much has been made in the British media that the UK economy will lead the way as the fastest growing G7 economy this year, according to the IMF expanding by 3.2%.  The data for the second quarter have just come out, with a growth rate of 3.1% yoy (although that could be revised down a little later).  So the UK economy has finally returned to its pre-crisis peak in 2008 – that’s after six years, the slowest recovery of the major economies!

The generally ‘unproductive’ services sector, including financial services and real estate, is now 2.9% above 2008 levels, but the production sector (manufacturing, mining etc) is still down 11.3% from 2008 and construction of new homes, roads, rail and offices is still down 10.7% from the peak.  So Britain’s property price boom that is leading the ‘recovery’ is a product of low interest rates, government subsidies and very low production by private building firms.

But if Mark Carney, the Bank of England governor, is to be believed, the era of low interest rates is soon to end, with the BoE planning to hike rates before the year’s end.  I doubt that but if it happens and interest rates start to rise, that could quickly burst the property bubble as millions of Brits face sharply higher mortgage costs.

The Resolution Foundation calculates that the number of UK households struggling to keep up with their mortgage payments will double to 2.3m by 2018, even under the scenario of small, gradual interest rate rises as suggested by the BoE.  Even with interest rates at current historic lows, one in five borrowers said they had difficulty paying their mortgage. This was only slightly down on the one in four who said the same in 1991, when base rates hit 13 per cent.

One in four households would face repayment problems if rates rose by steps to a moderate 2.9% by 2018.  And over one million would find themselves in the unsustainable position of “debt peril”, in which more than half their post-tax income went on repayments.  Two in five mortgage holders are really ‘mortgage prisoners’, unable to refinance their home loans when rates rise, after stricter lending criteria came into force in April. That would leave them stranded on the standard variable rates charged by their lenders and “fully exposed” to further rate rises.

And still no sign of significant recovery in business investment in productive sectors.  Shouting at windmills.

30 thoughts on “Shouting at windmills”