The latest figures (April 2014) for UK manufacturing and industrial output showed an acceleration in expansion to reach 3% yoy growth for industry as a whole.

Manufacturing output growth was even stronger at 4.4% yoy.

But remember UK industrial output is still well below pre-crash levels, – some 11% below while manufacturing is still 7% down. 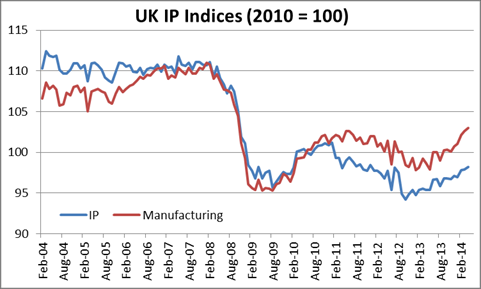 Another long-term feature is the decline in the UK’s North Sea oil and gas production. It’s straight downwards and is now 40% lower than in 2004.That does not auger well for an independent Scotland relying on energy revenues to do better if outside the UK.

The UK’s capital goods sector is doing particularly better, but this sector (aerospace, engines etc) is mainly for export not domestic demand.

All this brings me to make a few rash predictions about the UK and elsewhere for 2015 and beyond. I am ready to be shot down, but here goes.

1. The Scots will narrowly vote no to independence, reducing the uncertainty about the break-up of the UK for another decade. This will be a relief for British big business. Alex Salmond and the Scottish Nationalists will use the narrow defeat to get more concessions on tax-raising powers (already promised by the Conservatives) and will look for another vote down the road.
2. The improving UK economy over the next year (slightly faster growth; increased employment and possibly a small rise in average real incomes) will deliver an outright victory for the Conservatives in the May general election (something I forecast tentatively back in 2010). The UKIP vote will not be replicated in the election, so the Conservatives will win key marginal seats.
3. The Conservative government will ‘renegotiate’ the terms of staying in the European Union and the government will campaign for staying in at the proposed referendum in 2017 and the British people will vote to do so. Much depends here again on the state of the UK and Eurozone economies. In any new economic slump, by then likely, (see below), the UK economy will look the worse; and Europe better.
4. The global economic recovery will continue over the next year and the major economies will reach a peak in their post-crisis growth rates in 2015 (probably still below pre-crisis trend rates). This will be driven by an improvement in business investment in the real economy for the first time.
5. Rising capital accumulation will be accompanied by rising wages and relatively poor productivity growth. That is the formula for a fall in the overall rate of profit in the major economies in 2015.
6. By 2016, falling profitability will reverse the investment recovery and a new economic slump will be on the agenda.

Finally, my latest review of Thomas Piketty’s Capital in the 21st century, called Unpicking Piketty, has been published by Weekly Worker and you can find it here: (http://weeklyworker.co.uk/worker/1013/unpicking-piketty/).

9 thoughts on “UK industry; some predictions for 2015 onwards – and a Piketty review”