I don’t usually comment on straight politics on this blog and hardly ever on local elections.  But of course we know that politics and economics are not divorced from each other, as mainstream ‘positivist’ economics thinks. It’s ‘political economy’, after all. So I cannot resist a few words on the results of the seemingly obscure UK local elections in some councils and districts in England.

The UK media has gone berserk in telling us the anti-EU, anti-immigration, right-wing UK Independence Party (UKIP) had a huge surge from nowhere in its vote.  All the talk was that UKIP was about to win the biggest share of the vote and seats in the European Parliament when the results come out on Monday.  It was now a ‘major threat’ to the centre-right coalition government and could even replace Labour as the main opposition and so on……

Actually, the local election results do not bear out that conclusion at all.  It was Labour that polled the biggest share of those who voted in these minor elections, albeit only 29%.  The ruling Conservatives also polled more than UKIP at 25%.  UKIP was third at 23-24%, a leap up from last time, but hardly a victory.

Indeed, this ‘Poujadist’ party will have no more than one-tenth of the council seats won by the two main parties, Labour and Conservative.  And nearly all UKIP’s seats will be concentrated in rural areas, particularly the better-off south-east and east of England (Scotland and Wales did not vote and UKIP is non-existent there).  In London, UKIP did poorly.

Actually the real winners, as usual, were the NO-VOTE party.  The turnout for these elections was not more than 40%, so most people eligible to vote did not bother.  Translating the share of votes into shares of eligible voters, we find that the winners of these local elections, Labour, got no more than one in eight potential voters to support them and the ruling Conservatives managed only one in ten eligible to vote.

The government has been crowing about the return of fast economic growth that the UK economy is now experiencing under its policies.  And there was apparently more good news in this week’s retail sales figures, which showed a big surge. 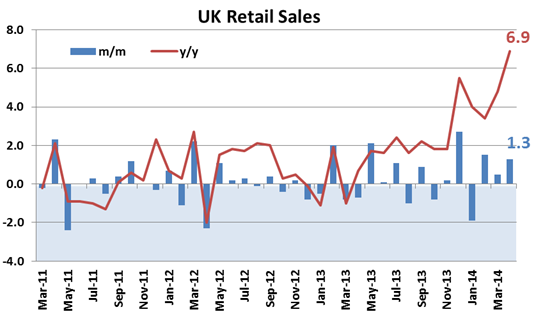 But it seems that the British electorate does not agree that all is rosy.  And we can see why when the latest data continue to show that average real incomes are falling as inflation outstrips wage increases (see my post,
(https://thenextrecession.wordpress.com/2014/05/07/britain-is-booming/).  Even now, Britain’s real GDP has not yet returned to pre-crisis levels, and with employment in badly-paid jobs and self-employment rising, the overall productivity of British capitalism has declined.  Indeed, Britons are working harder and longer for less money.

UK business investment was up 8.7% in the first quarter of this year compared with a year ago.  That sounds good – until you see that investment is still some 18% below where it was in 2008 and this is nominal terms.

The latest data show that the top 10% of British households own 44% of all household wealth (to use Thomas Piketty’s definition) – they are not feeling the depression, only the ‘boom’.  And it’s their sentiments that the government expresses.

The reality is that there is increasing disillusionment with the mainstream political parties as we shall see when the EU parliamentary elections are announced and I have commented before on the decline in voter turnout for elections in the major capitalist economies – Japan, the US, Germany and the UK.

In the UK, the combined Conservative and Labour vote in general elections has fallen to 60% from 80-90% in the 1960s, while separatist and other parties have risen from nothing to 12%.  In this little local election, the combined vote of the top two parties was 54%.  Voter turnout has plummeted from 75% in the 1980s to about 60% now, as politicians become increasingly divorced from their voters.  Back in the 1960s, as much as 15% of MPs were manual workers, now it is less than 5% while those MPs who have never had a proper job and are just ‘career politicians’ is now 15%.  The rest had jobs in the ‘professions’ and business and finance etc, with many millionaires among them.

The ‘surge’ of  support for parties like UKIP is a frustrated expression of people despairing at the main parties of capitalist democracy ever doing anything to improve their lot or even stop it getting worse.  We’ll see that sentiment expressed in the EU election results on Monday.  I’ll comment on the state of Europe’s economies then.