The British media and the government have made much of the news that the UK economy is likely to grow faster than any other of the top seven capitalist economies this year.  According to the latest forecast of global growth released by the IMF, the UK will grow 2.9% this year, compared to 2.8% in the US and 1.7% in Germany.  And the advanced economies as a whole will expand output by 2.2% compared to just 1.3% in 2013.

However, what was not mentioned so loudly by the media was that the IMF has trimmed its growth forecast for the world as a whole from a previous forecast of 3.9% to 3.6%, compared to 3% in 2013.  This reduction was because the so-called emerging capitalist economies are experiencing slower growth than before the crisis.  The IMF expects these economies to grow 4.9% this year, only up slightly from last year.  Also, the IMF reckons that in 2015, the advanced economies will still grow only 2.3%, hardly faster at all than this year, while the UK’s growth will slow to 2.5%. 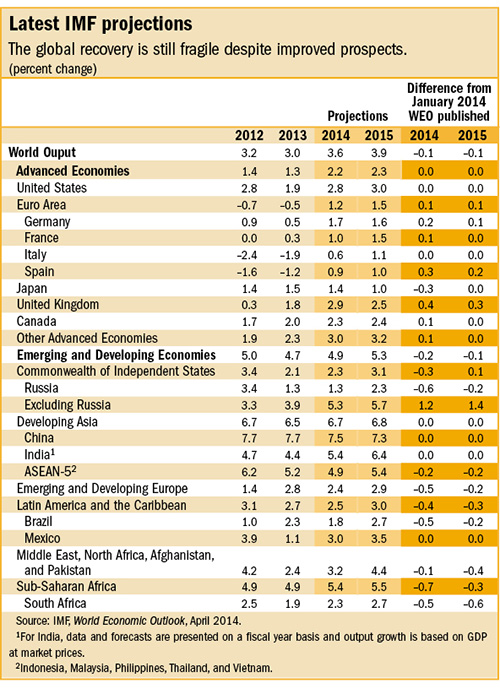 Moreover, many major economies have still not returned to the real output levels achieved before the crisis.  The UK was still 0.5% below its previous peak at the end of 2013.  Italy was still a huge 7.5% below, Spain 7% below and France flat. The distressed Eurozone states of Ireland and Portugal are 5-7% below and Greece some 23% down!  And this is now six years since the Great Recession broke.

But here is the even more startling fact:  if you measure the loss of real output since 2008 relative to where it should have reached in 2013 if there had been no Great Recession, then Greece and Ireland have lost nearly 40% of the potential rise in real output from 2008 to 2013 that they should have had.   The UK has lost near 20%, the US 12% and even Germany has lost a potential 5%.

When you add up all this lost potential output in dollar terms, it comes to over $5 trillion for the US, the Eurozone, Japan and the UK.  This is the value of output that has been lost forever and that’s real money.  What’s more, extra potential output will be lost until these economies grow at the same pace as before the crisis – and they will not be doing so in 2014 anywhere.

Here’s how it looks for the ‘fast-growing’ UK as a chart – it’ s much the same for the other economies. 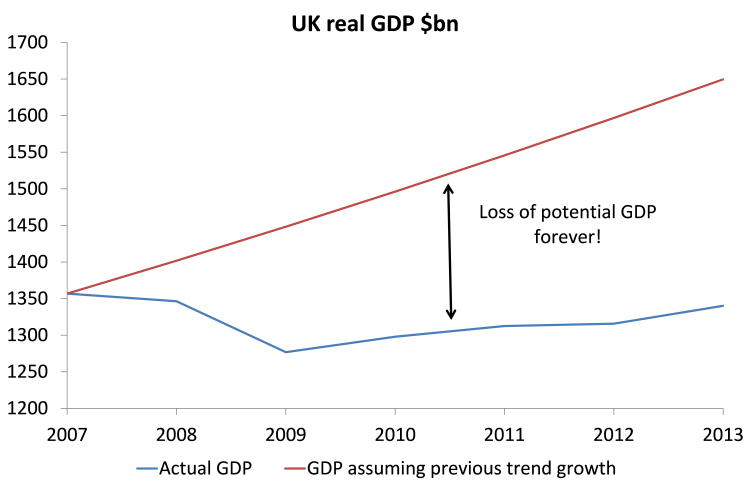 Such is the waste of jobs, incomes, services and resources that the Great Recession and recurring capitalist slumps deliver.

A look at the high frequency data on the state of economic activity in March 2014 shows that the slow recovery in the US continues, based on the combined survey of manufacturing and service companies. 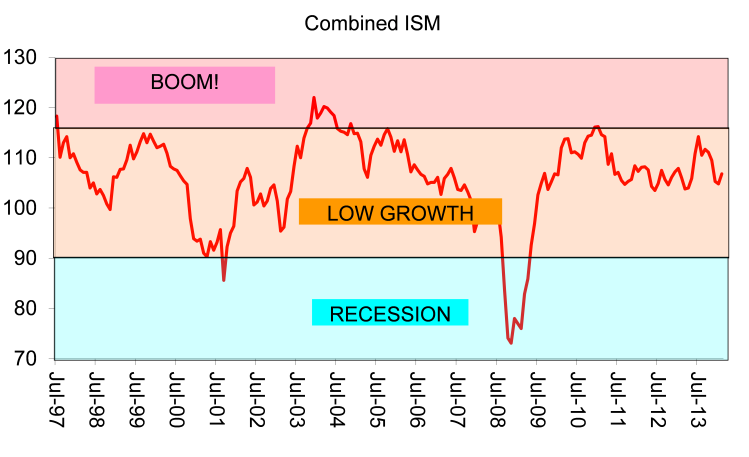 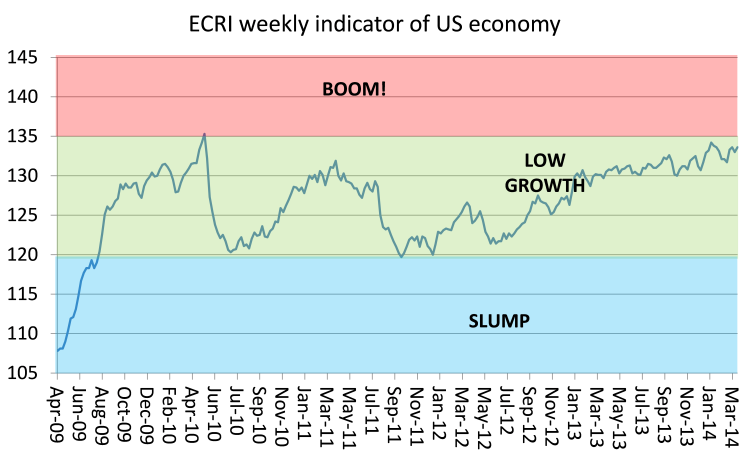 In March, all major economic regions expanded but most at a slower pace than in February.

The world economy continues to crawl.