The final data for UK GDP in Q4 2013 were released today.  Real GDP rose 0.7% over the third quarter, making 1.8% for the whole year, the best rate since the start of the Great Recession. 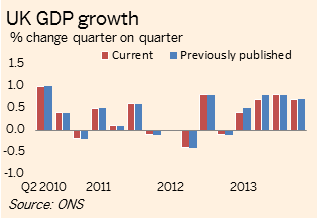 Much has been made in the media and government as well as mainstream economists about the dramatic recovery in the UK economy in the last year.  And these figures have added to that optimism, especially as business investment rose 2.4% in Q4 over Q3, making a rise of 8.5% over this time last year. That sounds good.

As one mainstream economist, George Buckley of Deutsche Bank put it: “This provides some hope that the recovery is gaining breadth”.  Another Chris Williamson of survey data firm Markit, said: “Economists have been busy revising up their forecasts for 2014, with the Bank of England in a particularly bullish mood, expecting growth of 3.4 per cent. Such optimism is looking warranted, given the current strong survey data, and the details of the fourth-quarter GDP report.”

But hold on.  As another commentator put it: “The key to the improved performance of the economy is whether companies will unleash their pent-up cash reserves and embark on a long-awaited investment spree.”  Yes, is the investment strike by the business sector really over?  When you look closer at the investment data, things don’t look so rosy.

Sure, business investment has increased for four consecutive quarters.  However over the medium term, investment is essentially flat. 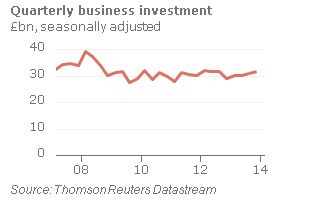 Moreover, this is in cash terms.  Relative to the size of UK GDP, business investment has been in a long-term downward trend since 1999, with only a brief pick-up during the credit and property boom of 2005-7. 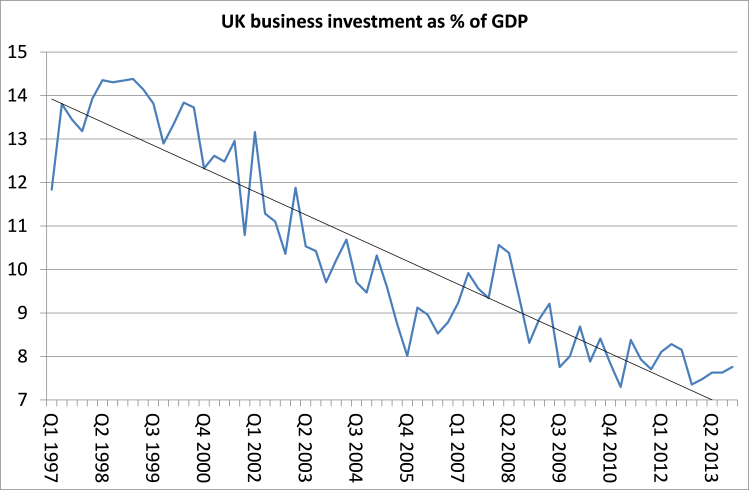 Sure, business investment as a % of GDP has now moved up 5.5% from its trough of 7.4% of GDP at the end of 2012, but the ratio of investment to GDP is still 27% below its peak level at the beginning of 2008 when the Great Recession began.  There’s a long way to go before it can be claimed that the investment strike by Britain’s business sector is over.

3 thoughts on “Is the UK’s investment strike over?”