At the end of January, finance officials from the Troika (EU Commission, ECB and the IMF) and the finance ministers of Germany and France held a secret meeting to discuss what to do about Greece.  Greek government officials were not invited.  They were trying to figure out how to tackle two issues threatening to unsettle the fragile economic recovery in Greece and the broader euro zone;  1) how to press the Greek government to forge ahead with unpopular ‘structural reforms’; and 2) how to scramble together extra cash to cover a shortfall in the country’s financing for the second half of the year, estimated at €5-6bn.  The meeting was inconclusive.

But what is clear is that on its own Greece cannot escape the debt deflation trap that it has descended into. Gross public and private debt relative to GDP has risen to record proportions and is still rising. Greek companies have the highest debt to equity ratio of modern economies at 235%, more than twice the eurozone corporate average. These debt ratios are rising partly because the deficit on Greek government budgets is only just been closed, but mainly because nominal GDP growth remains non-existent while the cost of servicing debt continues to rise.

And another liquidity crisis is approaching just as the Euro elections take place.  Greece faces a large maturity of government bonds in May of €11bn. And yet the IMF hasn’t disbursed any promised aid to Greece since last July and is now €3.8bn behind in its scheduled aid payments under the current bailout package. The IMF insists on having a clear view of the country’s finances 12 months ahead and this condition hasn’t been met.   The cruel irony is that Troika funds go to the Greek government through an ‘escrow’ account (not controlled by the government) to be used to pay government creditors who turn out to be other EU governments and banks!  So hardly any of the bailout funds touch the sides of the Greek economy and the people.

The Greek coalition of the conservative New Democracy and the formerly social democratic PASOK (the government is now reduced to just two parties with a three-seat majority) is making lots of noises about how the government budget is now in balance; that no more austerity is necessary and that Greece might even be able to raise funds from the global bond market this year.  Sure, the government has managed to obtain a surplus (before interest payments on debt) in 2013 of €812m.  But the idea that Greece is out of the grip of austerity and will avoid a debt deflation crisis is hogwash.

For a start, this budget ‘surplus’ was only possible through extreme austerity cuts on government spending.  Tax revenues still fell short of target.  More important, as a recent OECD (not part of the Troika) report argues
(see here, http://www.oecd.org/greece/greece-2013.htm),
the economic depression that began in 2009 shows no sign of abating. The OECD expects a contraction in real GDP of another 0.4% this year.  Given that prices are deflating at around 3% a year currently, that means a contraction in nominal GDP of close to 4%, driving up the debt ratio in simple mathematical terms.

Currently, the public debt ratio is over 180% of GDP and the economists of OECD predict that by 2020 Greece’s debt pile will still stand at the astronomical level of 157% of GDP in contrast to 124% that Troika is expecting. And even the Troika’s target is still double that set for Euro member states to meet by the end of next decade.  The OECD reckons that the Greek public sector must run a surplus of 4.5% of GDP from now in order to get its debt ratio down to the Troika target.  The OECD reckons that won’t be achieved until 2018.  The reality is that further austerity for another five years is both politically impossible and economically futile. Greece will never do it. 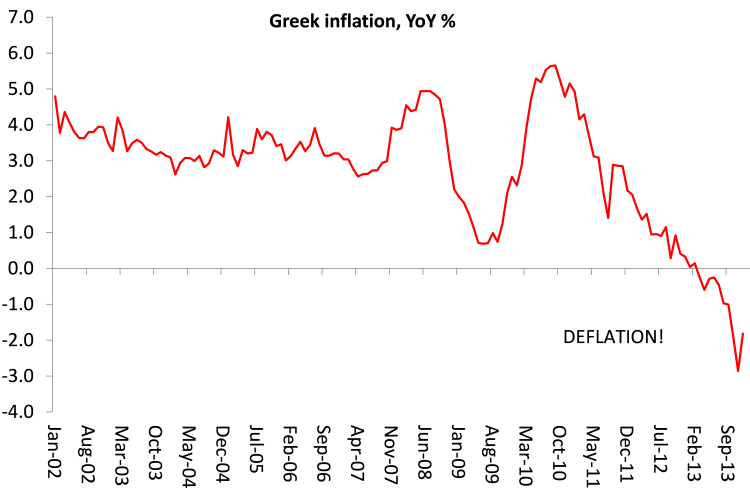 What is the alternative then?  Well, up to now Keynesian economists and many on the left have advocated that Greece needs to break with the euro and the German-led Troika bailout packages.  Greece should restore the drachma and then devalue to boost exports and inflate away the real value of debt.  In short, Greece should ‘do an Argentina’ and default on its public debts.  Two-thirds of the outstanding Greek government debt is held by the Eurozone bailout mechanisms and the IMF.  The other third is mainly held by the Greek banks.

Two things spring from this alternative policy.  First, was the Argentina option of 2002 a success?  In previous posts, I rejected this option (of voluntary devaluation)  because the experience of Argentina was partly exceptional and would eventually prove unsuccessful (see
https://thenextrecession.wordpress.com/2012/05/10/eurozone-debtmonetary-union-and-argentina/).
If the euro crisis is a crisis of capitalism and not just a problem of the euro as a ‘too strong’ a currency, then devaluation and debt default on its own would only be a temporary palliative for Greek capitalism – and no more pallatable for working people than euro-defined austerity, as it would mean hyperinflation and a collapse of businesses laden with euro debt.  The current renewal of Argentina’s crisis has confirmed that prognosis
(see my post,
https://thenextrecession.wordpress.com/2014/02/03/argentina-paul-krugman-and-the-great-recession/).

Paul Krugman was one leading Keynesian economist (along with some Marxists) who advocated this ‘solution’ for Greece.  But having seen his solution/prediction of euro collapse and Greek default fall short, he has started to moved to the opposite.  “So is the euro crisis over? No — it’s not over until the debt dynamics sing, or perhaps until the debt dynamics sing a duet with internal devaluation. We have yet to see any of the crisis countries reach a point where falling relative wages are generating a clear export-led recovery, or in which austerity is actually paying off in falling debt burdens.  But as a europessimist, I do have to admit that it’s now possible to see how this could work. The cost — economic, human, and political — will be huge. And the whole thing could still break down. But the ECB’s willingness to step up and do its job has given Europe some breathing room.”

And it’s true that for the Eurozone as a whole, if there is no political upheaval that overthrows pro-austerity governments (as we are seeing possible only in tiny impoverished Bosnia right now), then eventually enough capital value will be destroyed through bankruptcies, unemployment and an investment strike to raise profitability in surviving Eurozone corporations and the ‘whole crap’ can start again – after huge human cost, as Krugman says.

However, I am not sure that even this is possible for Greek capitalism, which is not just on its knees but is prostrate with life support mechanisms not working.  It’s true that the crushing of the living standards and wage earnings of Greek households is making Greek industry more ‘competitive’ – labour costs per unit of (falling) production have dropped 30% since 2010.

But the task of turning the Greek economy by its own devices is probably just too much.  Just look at the level of debt in the public sector that Greece is burdened with compared to other Eurozone states and compared even to where it was back at the end of Great Depression of the 1930s (1938).   Greece is on its own.

The Euro elections approach and current opinion polls in Greece suggest that the leftist SYRIZA party will lead in the vote and take the most seats.  It is also likely to take control of local government in the major cities.  So the pressure is mounting on the coalition and its policy of complying with Troika austerity measures in return for bailout funds to cover government debts and bail out Greek banks.  The coalition is now talking about amending the Euro election rules for party votes to try and reduce the chance of defeat by SYRIZA.

The Troika wants the conservative government to survive.  It does not want to be faced with a SYRIZA-led government refusing to implement the current bailout terms and wanting to revise them. So it is discussing how to provide extra funds for the coalition to keep them going and avoid either default or even more austerity that could break the Greek camel’s back.  The Germans don’t want to cough up any more money but they will probably agree to relax the terms of repayment of debt, perhaps by rolling over that debt perpetually – after all the UK did not pay all its war debts back to America until 2002!  But just relaxing the repayment burden does not restore Greek capitalism.  Unless the Eurozone leaders write off the loans to Greece and/or the region as a whole makes a dramatic economic recovery in the next year or so and this revival ‘trickles down’ to Greece, Greek capitalism will remain imprisoned.