The latest data on profits and fixed assets have now become available in the US to make the most accurate calculation of the rate of profit (ROP) a la Marx (to use Dumenil and Levy’s approbation) for 2012.  The data come from the Bureau of Economic Analysis (BEA).  As I did last year (see my post mr1112), I have updated my calculations.  There are the usual issues of what to measure: 1) total value in the US economy or just corporate profits or just non-financial corporate profits; 2) net fixed assets of the whole economy or just the private sector; or just the non-residential private sector or just the corporate sector or just the non-financial corporate sector; 3) fixed assets measured in historic or current costs and 4) including employee compensation as a measure of variable capital or not.

I have discussed all these measurement issues in my paper to the AHE back in 2012 (The profit cycle and economic recession) and in last year’s post. I reckon the closest measure of the rate of profit a la Marx is to use the net operating surplus in the whole economy as a measure of surplus value (BEA NIPA table 1.10 line 10) divided by net private fixed assets in historic (HC) and current cost (CC) terms as a measure of constant capital (BEA table 6.1 line 1 and BEA table 6.3 line 1) and employee compensation for the whole economy as a measure of variable capital (BEA NIPA table 1.10 line 2).  Inventories ought to be included in the estimation of constant capital and it can be done, but the inclusion does not make much difference; so to save some work, I have left inventories out.

To be as close to Marx’s formula of the rate of profit (s/c+v), I include variable capital in my calculation, unlike other analysts.  They leave it out because it is considered circulating capital with a turnover of less than one year (or the period of calculation).  So it is not a stock but more flow, as wages are turned over more frequently.  However, G Carchedi and I do not agree (we have an unpublished paper on this issue).  We think the removal of variable capital is not correct theoretically and unnecessary practically as the BEA data do take the turnover issue into account.  But that discussion is for another day.

Here is the graph showing the US rate of profit as I measure it, based on net fixed assets in both current and historic costs measures. 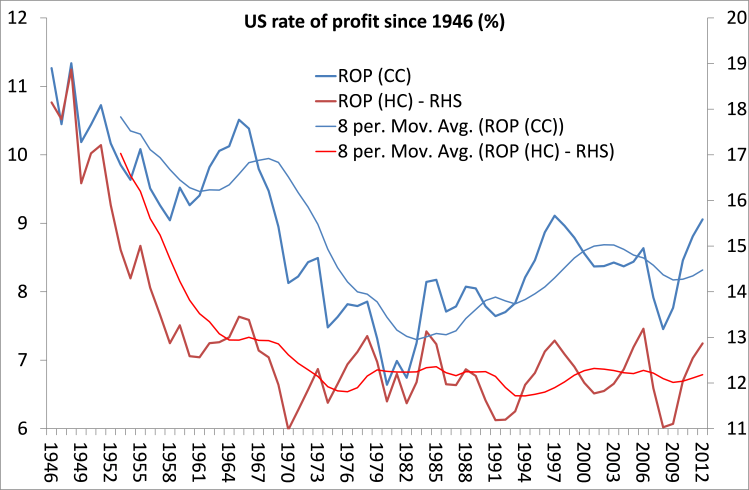 The key points from the data are not much different from last year’s.

What these points show is that Marx’s law of profitability holds good for the US: there is a tendency for the rate of profit to fall over time in capitalist accumulation and this tendency will overcome the counteracting factors eventually.  But it also shows that, for a period, and especially after a major slump that devalues existing capital, counteracting factors can rule – namely a rising rate of surplus value, higher profits from overseas and the cheapening of constant capital through new technology, among others.  That was the experience of the so-called neo-liberal period from 1982 to the end of 2oth century.

But even this neo-liberal ‘recovery’ period, with the dot.com bubble of the late 1990s and the credit-fuelled property boom after 2002, was not able to restore overall profitability back to the high levels of the mid-1960s.  The ROP peaked in 1997 and the recovery in US profitability during the 2000s and since the Great Recession has only got the ROP back to that 1997 peak.

This is what I said in last year’s post on the US rate of profit and I think it still holds: “when the organic composition of capital fell, as in the neo-liberal period, due to the slump in the early 1980s and then from the cheapening effects of new technology in the 1990s, the rate of profit rose. But in the 2000s, those cheapening effects have worn off and organic ratio has risen back to levels not seen since the crisis period of the 1970s. But this time, the rate of profit has not fallen as much because the rate of exploitation (surplus value) has also risen, unlike in the 1970s.

The rise in exploitation and growing inequality (well recorded by many and in this blog) may lead to social upheavals down the road, but it does help to keep the rate of profit up. But there are limits on increasing the rate of exploitation and the US economy has probably reached them, especially with productivity growth slowing and real GDP growth so weak. So the current rate of profit can only be sustained by a sharp fall in the organic composition of capital. That can only happen if there is large depreciation of the value of the means of production (and in fictitious capital, as I have discussed in previous posts). And that means another slump or recession, perhaps equivalent to 1980-2”.

I had forecast a fall in the ROP for 2012 last year, but that has not happened. My measure of the data show that the ROP rose in 2012 from 2011 by about 2-3%.  A small rise but up, nevertheless.  Where to now?  As we near the end of 2013, can we make an estimate for the ROP in 2013 and beyond?  Well, we can make some reasonable extrapolations on the changes in the variables involved in the ROP, namely net fixed assets, employee compensation and surplus value.  In doing that, I find that there may have been a very small rise in the US ROP of about 1% in 2013 using the BEA data.

But we can also use the quarterly measures for calculating the ROP from data provided by the US Federal Reserve to see how things are going in 2013.  The Fed measures are for the corporate sector only and not for the whole economy, so are not strictly comparable with the BEA data I have used. I take Fed data for net operating surplus in the corporate sector (for profits) against tangible assets measured in both current and historic costs (for constant capital) and include employee compensation (for variable capital).

The results show a recovery in the corporate ROP since the trough of late 2008, just as the BEA data for the whole economy does.  The Fed data also show that the corporate sector ROP in 2013 is below the pre-crisis peak of 2006 on both CC and HC measures.  And the ROP was down slightly in 2013 on average compared to 2012 on a CC basis (by about 1%) and flat on an HC basis.  Basically, the US ROP stopped rising in 2013. 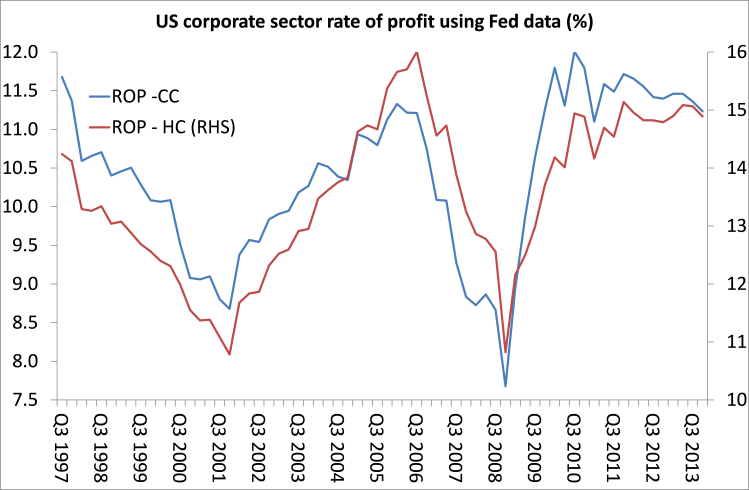 Most important for forecasting another recession is what is happening to the mass (or total) of profits.  Usually, if the rate of profit starts declining consistently, at a certain point, the mass of profit will start to fall.  When that happens, investment drops off fast a few quarters later and then the capitalist economy slips into a slump.  Both the BEA and Fed data suggest that the mass of profits is still rising, but at a slowing pace.  So no recession is imminent. 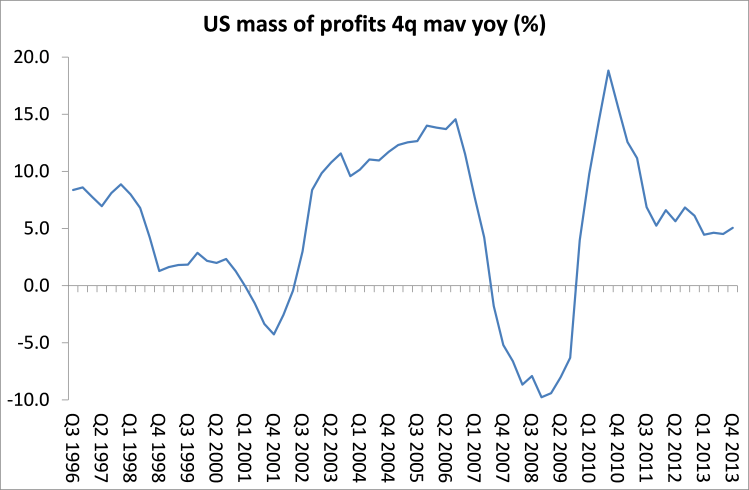 Growth in the mass of profit will probably slow further next year. There is good reason to believe this for other sources apart from my own.  Albert Edwards, the investment guru at the French bank Societe Generale, reckons that US corporation’s ability to raise prices is not keeping pace with a rise in labour costs per unit of production.  In other words, profit margins, having rocketed after the trough of the Great Recession, are now reversing.

So the next recession may not be imminent, but the US ROP now looks as though it is heading down from here, as profit margins start to fall.  If that leads to a fall in the mass of profits in 2014 or maybe a little later, another recession would follow soon after.