Central bankers from all over the world gather each August underneath the Grand Teton mountains in Jackson Hole, Wyoming for their summer symposium to discuss the global economy and what central bankers can do about it.  This year, Ben Bernanke, head of the most important central bank, the US Federal Reserve, is not present.  He is about to end his term of office at year-end, so perhaps he saw no need to attend.  But lots of other key bankers and mainstream economists are there.

The main issue to discuss, as it was last year, was how effective has been the policy of ‘quantitative easing’ (QE) in getting the global capitalist economy into recovery mode.  QE is where central banks buy up government, corporate and mortgage bonds through the expansion of central bank power money (‘printing money’), in order to inject ‘liquidity’ into the economy.  The idea is that this extra credit will filter through from the banks and pension funds that the central bank has bought the bonds from into loans to households and businesses.  Those loans will lead to more spending in the shops and more investment by businesses.

Well, has it worked?  That’s easy to answer.  No.  The global economy remains stuck in a low-growth mode, and most important, at such a low growth in economic activity that unemployment rates remain nearly double the rate before the Great Recession in the major economies and three or four times as high in the depressed economies of southern Europe.

At last summer’s symposium, central banks were worried that QE was not working and a leading mainstream economist, Michael Woodford presented a paper (http://www.kansascityfed.org/publicat/sympos/2012/mw.pdf?sm=jh083112-4) in which he argued that if central banks could change the perception of businesses and households that interest rates were going to stay very low for a long time, then that would inspire ‘confidence’ and thus lead to increased spending and investment.  This led to the recent policy of central banks, called ‘forward guidance’ (see my post, https://thenextrecession.wordpress.com/2013/08/13/a-blind-guide-dog/).  Forward guidance is an attempt by central bankers to persuade businesses and consumers that they do not have to worry about rising interest rates for years ahead and so they can start spending now.

But forward guidance has done no such thing.  Indeed, after both the ECB and the Bank of England followed the Fed and announced such ‘guidance’, stock markets fell and interest rates rose!  That was partly because businesses still do not believe that central banks won’t hike interest rates at the first sign of economic recovery.  But it was also because the Federal Reserve had already announced that it intends to begin to end its QE policy by gradually reducing its planned asset purchases that it will make from September onwards.  That is seen as a sign that central bank support for ‘easy money’ is coming to an end.  Stock markets, particularly in emerging economeis, which have been the main beneficiaries of this largesse, have sold off big time.

And that’s the point.  QE has not boosted the ‘real economy’ but merely fuelled a new credit bubble in stock market and property prices – US home prices are now up over 12% since this time last year and in the UK, prices are up 5%, with over 10% in ‘hot’ London.  Indeed, as I pointed out in that previous post, the latest evidence shows that  QE measures have had little or no effect on boosting the real economy.  A recent paper by Vasco Curdia and Andrea Ferrero at the Federal Reserve Bank of San Francisco (Efficacy of QE) found that the Fed’s QE measures from 2010 had helped to boost real GDP growth by just 0.13 percentage points and the bulk of this ‘boost’ was thanks to forward guidance, namely convincing investors that interest rates were not going to rise.  If that factor had been left out, the US real GDP would have risen only 0.04 per cent as a result of QE.

This is worrying for central banks.  They would like to think that providing easy credit has done the trick and there is now sustained economic growth so that they can end their QE measures.  Instead, they cannot – indeed in the case of Japan, they have been extending them.  At the Jackson Hole symposuum, Christien Lagarde, head of the IMF, urged caution on ditching QE too early:  “now is not the time to pull back on these policies.. are still needed in all the places” these policies are being employed… I do not suggest a rush to exit,” Lagarde said, adding in Europe, “there is a good deal more mileage to be gained” from unconventional policy. As for Japan, she said an “exit is very likely some way off.”

And Lagarde added an important sting in the tail of her address.  She reckoned that QE should be maintained because it would help allow governments to push through yet more measures of wage cutting, privatisation, reductions in government spending and ‘liberalising’ markets in order to raise the profitability of capital and thus sustain economic revival down the road.   As she put it: “I do worry that all the hard work of central banks will be wasted if not enough is done on other fronts—to adopt the admittedly more difficult policies needed for balanced, durable, and inclusive growth. . . . [unconventional monetary policy] is providing the space for more reforms. We should use that space wisely.”

But despite the policies of austerity to reduce costs and despite the policy of easy money through QE, the global capitalist economy does not respond.   This has been the longest slump since the second world war. A recent CEPR discussion paper by Antonia Fatas and Olian Mihov (http://www.cepr.org/pubs/dps/DP9551# and http://www.voxeu.org/article/recoveries-missing-third-phase-business-cycle) found that the US economy has still not returned to ‘normal’, ie trend growth in real GDP after more than 16 quarters since the trough of the Great Recession – and still counting.  That compares with just six quarters to return to normal in previous post-war recessions.  Moreover, the accumulated loss in US GDP from its peak caused by the Great Recession and the subsequent weak recovery so far totals 22% of US peak GDP and still counting.  That compares with a maximum of 16% in the 1980-2 slump and only 4-5% in other post-war recessions.  The depth and duration of the Great Recession has been hugely damaging – ant the gap remains (see graph below).

The driver of economic recovery under capitalism is investment.  That leads to jobs and then to income and then to spending.  But sufficient investment depends on profitability recovering to previous levels or higher and on debt not being too high that it strangles corporate investment.  That has not happened so far.  While  cash flow and profits may be up for larger companies, the rate of profit has not recovered in many capitalist economies, like the UK and Europe.  Also, large multinationals have preferred to invest in emerging economies rather than in the domestic economy.  And cash-rich companies have taken advantage of credit-fuelled (QE) stock markets to buy back their own shares rather than invest and boost dividends.  This helps executive bonuses!

Small businesses cannot invest because they cannot borrow on current terms and many are zombie companies just able to pay the interest on their debt.  They have been hoarding labour rather than invest in new equipment and labour saving systems.  And overall corporate debt levels remain too high to allow new investment – paying down debt or holding cash is safer.

The conundrum of rising profits and stagnant investment in productive assets shows that the ‘recovery’ is artificial.  It depends on central bank liquidity, which finds its way into the financial sector not the real economy.  The really cash-rich companies are banks, financial institutions and large multinationals and not the bulk of non-financial companies that invest and employ labour.   One analyst reckons that as interest rates start to rise over the next year, when central banks try to wean the capitalist sector off its milk of ‘easy money’ that has slowed “down the process of creative destruction… then these zombie companies are going to present symptoms of a disease which will begin to affect other companies. That is when the recession will come.”

Meanwhile, small businesses in the US and elsewhere are struggling – and they are the main sources of new employment. In 1982, new companies made up roughly half of all US businesses, according to census data. By 2011, they accounted for just over a third.  From 1982 through 2011, the share of the labour force working at new companies fell to 11% from more than 20%.  Total venture capital invested in the US fell nearly 10% last year and is still below its pre-recession peak, according to PricewaterhouseCoopers.  New startups, as opposed to startup jobs, accelerated during the recession and remain higher than average, according to the Kaufman Foundation (http://www.kauffman.org/newsroom/entrepreneurial-activity-declines-as-jobs-rise-in-2012-according-to-kauffman-report.aspx).  But what this shows is that older and blue collar workers, forced out of their jobs, are trying to set up self-employed businesses to to make ends meet.  Most of these businesses soon die a death. 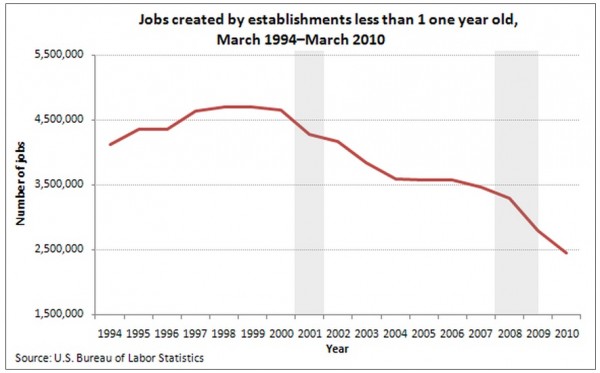 The unemployment rate in the US has dropped a little from its peak during the depth of the Great Recession.  But this hides the continuing depression in the labour market.  The labour participation rate, the ratio of people in the workforce against those adults of working age, has been dropping fast. 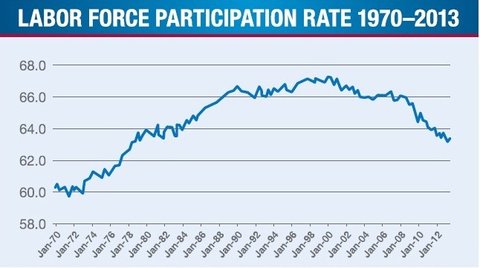 In other words, as Marx would put it, the reserve army of labour has been rising sharply since the late 1990s and accelerated during the Great Recession.  This reflects the efforts of the capitalist sector to counteract the fall in the US rate of profit since the late 1990s by raising the rate of surplus value – a major countertendency to the rise in the organic composition of capital – in effect the cost of new technology.  Capital aimed to exploit labour harder to compensate for increased costs of capital investment relative to profitability.

This succeeded for a while in checking a very sharp fall in profitability.   But eventually, a slump could not be resisted when profits began to slip from 2005 onwards.  Now the risk is that any growth in new value will be capped by the inability to employ more unused labour.  So economic growth will remain stunted.  Plenty for central bankers to ponder.

12 thoughts on “Down in the Jackson Hole”