The revised GDP report for Q1 2013 in the US provided the latest estimate of corporate profits.  It revealed that US corporate profits fell at an 8.4% annualised rate after rising at nearly a 10% rate during the second half of 2012.  And the share of profits in national income eased to 13.8% from 14.2% in the fourth quarter of 2012.  Much of this decline in profits in the first quarter was accounted for by a 26.1% annualised decline in rest-of-world profits.  So the slowdown in Europe in particular is hitting US corporate profits.  I took a look at how US corporate profits have done since they peaked in the third quarter of 2006, heralding the eventual financial collapse of 2007 and the subsequent Great Recession of 2008-9.   Profits in nominal terms (before inflation is deducted) are now 19% higher than that 2006 peak and, given all the concessions and tax deductions for the corporate sector introduced by Bush and Obama, after-tax profits are now 32% higher.  This rise in corporate profits has been concentrated on domestic non-financial firms as banks and other financial institutions suffered heavy losses.  So the previously leading financial sector profits have only just returned to their pre-crash peak.  Profits from abroad are still below the previous peak (-4.6%)

A better underlying measure of US corporate health is to look at the net operating surplus (NOS), which is the measure of profit without all the deductions and additions from interest on debt, taxes and depreciation allowances.  The corporate NOS to GDP ratio peaked at near 12%  back in 2006 and then plunged to under 8% during the Great Recession.  Now it is back to the 2006 peak, but interestingly, it appears to have levelled off and has broadly flatlined in the last two years.

These measures of US profits are in the corporate sector.  It’s a different story among US small businesses and the self-employed.  Proprietors’ income as a share of GDP is well short of the pre-crisis peak, which was back in 2005.   Small business profits as a share of GDP are lower than they were eight years ago.   This goes along with the well-documented fall in share of income going to labour that has taken place in the last ten years or so and is the main contributor to the rise in US profits.

A rise in the mass of profits or in the share of profits in new value created does not necessarily translate into a rise in profitability, which I have measured in Marxist terms as the amount of surplus-value (profits, interest and rent) appropriated by the capitalist class divided by the value of the stock of fixed and circulating capital accumulated plus the cost of employing the workforce that created the new value (s/c+v).  This can be measured for the whole economy as net national income less employee compensation divided by the net stock of fixed assets owned by the capitalist sector and the compensation paid to employees.  Based on the latest data available and assuming certain projections for the stock of capital (for which official data in 2012 are not yet available), then the US rate of profit looks like this.

In effect, the US rate of profit in 2012 remains below its 1997 peak and even its 2005 peak, despite the profits recovery since 2009.  This justifies my argument that the US profit ‘cycle’ is still in its downward phase.

Now profits lead investment (not vice versa, as Kalecki post-Keynesians argue).  The correlation between US profits and US business investment is positive at .21 but if we lag investment by six months, the correlation rises to .53.   This suggests that any change in profits will lead to a change in investment. 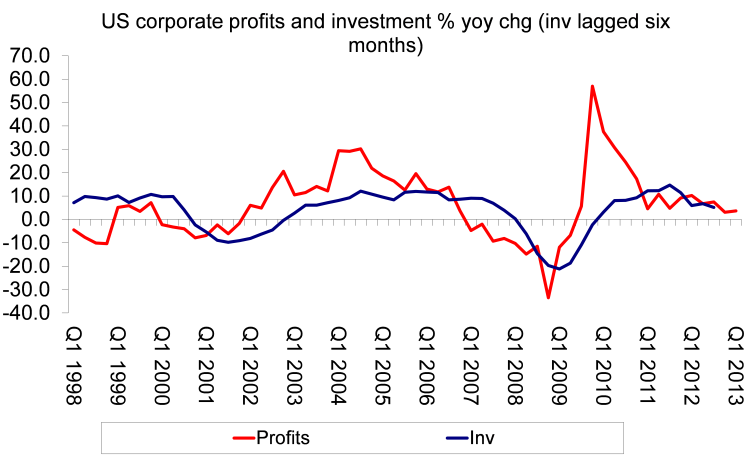 The latest US data reveal that the mass of profits is growing more slowly and may well cease to rise by the end of this year.  If that happens, then we can expect a sharp decline in an already sluggish investment growth.  We shall see.

If we look at this side of the Atlantic pond, there is a significant difference in corporate health. According to a recent report by The Share Centre, the UK’s biggest listed companies have suffered a drop in profits of almost 30% in the last year.  FTSE 350 firms generated revenues of £2.07 trillion last year, up only 2.1%. This rise is the slowest in at least five years, and the only year in this period where turnover has fallen short of inflation.   Net profits slumped 29.7 % to £114.5bn last year, still 14% below 2007 levels, but higher than in 2008 and 2009.  Gross profits last year fell 6.9% compared to 2011, hitting £380.1bn, and pre-tax profits fell 24.6% to £163.6bn.  Last year’s net profit weakness reflects negative trends at three of the FTSE’s most profitable sectors – mining, oil and finance. The concentration of resources firms in London meant the volatility in commodity prices made a particularly large dent in the indices’ combined earnings.   Out of the 10 largest firms by profit – which together make a staggering 50 per cent of revenues and 57 per cent of the FTSE 350’s profits – three work in natural resources.

This decline in the mass of profit suggests that there will be no recovery in profitability of UK companies in 2013.  By the end of 2012, UK corporate profitability had slumped to under 12% of the net stock of capital (official UK data), compared to the 2007 peak of 15%.  Manufacturing sector profitability continues to be volatile but in a permanent downward mode – now at 4% compared to 12% at the beginning of this century.