Just before Easter, the US stock market hit an all-time record high.   The world index remains below its 2000 and 2007 peaks. Is this a signal that the US economy at least is now in full recovery and heading for better times, with the rest of the capitalist world not far behind? 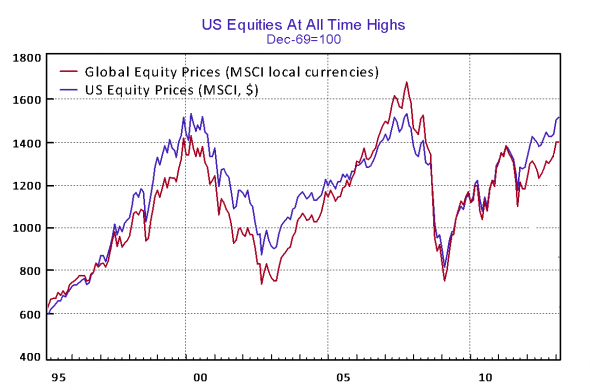 Well, stock markets are not good guides of  the short to medium term future, especially right now.  The price of shares tends to lag the performance of the underlying process of capitalist accumulation, as measured in profitability.  And when we look at the US economic growth since the depth of the Great Recession, it is nothing to get excited about.  Although better than in Europe or Japan, US real GDP growth is still well below trend at about 2% in 2012 and a huge gap remains between where trend growth (red line below) would have taken the US economy in real terms and where it is now (blue line below) – data from Doug Short (http://www.advisorperspectives.com/dshort/).

So what is driving up the stock market? The first reason is clearly the huge rise in US corporate profits.  As a share of US GDP, corporate profits are at record levels.  That’s partly because GDP has grown slowly, but it also shows how much of any increase in value created has been appropriated by capital compared to labour.  Total revenue growth has not grown nearly so much, it’s just that capital has taken an ever increasing share.

The latest data released just before Easter show that US corporate profits reached a record high in 2012.  Since the trough of 2008 they are up over 40% and are now 7% above the previous peak in nominal terms set in 2006.    Indeed, profits per employee has rocketed to near $16,000, doubling the ratio since 2000.

In contrast, wages are being squeezed and along with the below-par recovery in employment, the wage bill for capital is shrinking as a share of total value created.  In other words, the rate of surplus value or exploitation, as Marx called it, has risen sharply.

And as I have argued in previous posts, companies are using these record profits not to invest much into the ‘real economy’ but instead to buy back their shares, increase dividends and purchase financial assets.  No wonder there is a rally in the stock market.

The other reason for the stock market high is less ‘fundamental’ i.e. caused by the process of capitalist accumulation.  It is the artificially low interest for borrowing funds sustained by central banks around the world.  So the gap between what earnings you can get from buying a share compared to the cost of borrowing money to do so (red line minus blue line) is very high.

That is the result of monetary policy of easing interest rates and so-called quantitative easing boosting the quantity of money and thus helping to drive up stock prices (but not real GDP growth).  Stock prices have risen way more than is justified by increases in real GDP or corporate profits, as in previous cycles like the dot.com bubble of the 1990s or the property credit bubble of the 2000s.

So there is the need for a sober analysis of this stock market boom.  Although the US stock market (not Europe or elsewhere) is at a record high, that is only in nominal terms.  Stripping down the index for inflation (as Doug Short does below), the story is very different.  The US stock market in real terms is still in the ‘bear market’ that started in 2000 (red lines below show bear markets).

In my book, The Great Recession, I dealt with how stock markets enter cycles of bull and bear markets that track a similar cycle in profitability of capital in an economy (in this case, the US, of about 16-18 years).  I argued that, as long as profitability was in a down phase in its cycle, stock market prices would follow as, in the final analysis, the value of a share depends on the earnings that a company generates for its shareholders (see my post https://thenextrecession.wordpress.com/2010/01/12/the-stock-market-cycle-still-in-a-bear-market/).  There can be rallies within that secular bear market, as from 1932 to 1937, within the bear market of the Great Depression from 1929 to 1946.  Similarly there are the rallies of 2002-07 and now from 2009-13.  They still have not led to a real increase in stock market values from the peak of 2000.

If we measure the current average price of US stocks in total against earnings (the price to earnings ratio or P/E) in the red line below against where it should be, given the average trend rise in earnings (blue line), we can see that the US stock market is overvalued by around 27%.  If stock prices are to get into line with earnings, either earnings must sprint forward even more than they have done (and they are at record levels, remember) or stock prices will eventually fall back.

The bear market remains because stock prices ultimately depend on profitability.  While the mass of profits in nominal terms and as a share of GDP has reached a new peak in the US, profitability (i.e profits measured against the stock of capital advanced for machinery, plant, labour and raw materials) has not returned to the previous peak of 2005 and certainly not back to 1997 for the whole economy.  1997 is the date that I argue we entered a down phase for US profitability that eventually undermined the dot.com boom in the 1990s and the property/shadow banking boom of the 2000s.  By my estimate (still to be confirmed by more data), corporate profits may have hit a new high, but that has not restored either corporate profitability or overall economy profitability to a new high.  So we remain in a bear market.

For another summary of these arguments see my previous post: https://thenextrecession.wordpress.com/2012/07/15/what-does-the-stock-market-tell-us/