So it’s goodbye to Mario Monti, the bankers man who took over as Italy’s ‘technocrat’ PM in a coup engineered by the Euro leaders to oust the Murdoch-type right wing leader Silvio Berlusconi back in 2011, when the euro crisis reached a new level and Berlusconi threatened to oppose further fiscal measures (see my post, https://thenextrecession.wordpress.com/2011/11/10/italy-and-greece-rule-by-the-bankers/).  He had to go and Monti came in to introduce fierce fiscal austerity and attacks on labour rights.  Then when Berlusconi forced an early election, Monti, believing in all the praise heaped on him by the Euro leaders would be reciprocated by the Italian electorate decided to run for parliament.  It’s been a disaster for him.  The bankers’ man has taken a fall, mainly due to the efforts of the two clowns in Italian politics;  Silvio (the unfunny one) and Beppi Grilli (the very funny one).  This just expresses the growing opposition to austerity and the policies of the Euro leaders.

The centre-left party, the Democrats (PD) led by Pier Luigi Bersani (picture), will get the largest vote in the lower house of parliament at about 32%.  But Berlusconi’s right wing People of Freedom (PdL) party has got about 27%, much better than was expected when the campaign began.  And the euro sceptic anti-politician movement of Beppe Grillo’s Five Star party has got an amazingly high 24%, while Monti has polled just 9%.   So the vote against the existing order and policies; against austerity and the Euro leaders; was at least 51%.  Italy’s electorate may still be in favour of staying in the euro but they are very much against austerity and the Euro leaders.  And much of the centre-left voters would also agree.  Italy’s voters have decisively rejected the current pro-capitalist policies.

And scepticism about austerity, corruption and general incompetence on the part of Italy’s political elite has also been expressed in the lowest election turnout since the war.  And it will be the lowest since compulsory voting was abolished in 1994, coming in at 72%. 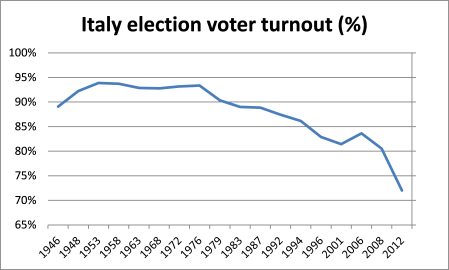 The low turnout has been the story of other recent elections in the US and Japan (https://thenextrecession.wordpress.com/2012/11/07/us-election-no-gold-at-the-end-of-the-rainbow/ and https://thenextrecession.wordpress.com/2012/12/16/japan-election-lowest-turnout-since-records-began/).  Everywhere, there is disillusionment with the elite and the existing political order.

Financial markets at first reacted positively to the results, because they thought that a ‘stable government’ would be formed that would continue to back fiscal austerity and try to introduce yet more measures to cut real wages, ‘deregulate’ the economy and meet Euro leaders’ fiscal targets.  But that optimism drained away as the results filtered through that the centre-left would not have a majority in the Senate Upper House  and that Monti centrist group may not be able to help out.  The prospect of Berlusconi and Grilli dominating and blocking anything that moves now suggested that Italians could go back to the voting booths again before the summer is out.

Anyway, the tasks of any new government to meet its obligations to the Euro leaders and to get the economy going are immense.  The reality is that Italian capitalism (like other parts of the Eurozone) is in deep trouble.  Italy is entering a second year of real GDP contraction since the ‘recovery’ from the Great Recession. 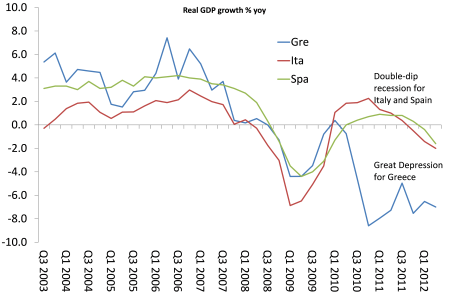 Italian capital was in the doldrums even before the Great Recession.  Profitability has been falling since 2000 and the rate of profit had fallen back to the level of 1963. 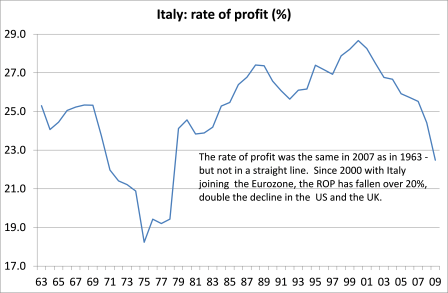 And since the trough of the Great Recession in mid-2009, Italy’s rate of profit has fallen further and is now down nearly 30% since 2005 compared 15% for the Eurozone as a whole. 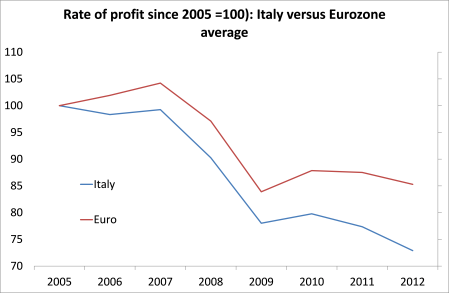 As night follows day, with profitability falling, net investment by Italy’s capitalists has dried up entirely. 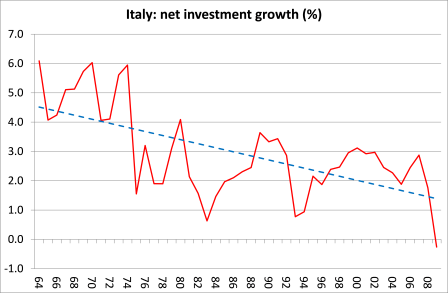 And since the end of the Great Recession, there has been no recovery in investment at all.  Real investment levels are now down 25% from the peak in early 2007.

The policies of austerity at first introduced by Berlusconi back in 2010 and then more vigorously by the bankers’ man Mario Monti have failed, even on their own terms.  The public debt to GDP ratio continues to rise and unit labour costs, which have been cut back sharply by austerity in other countries, continue to rise in Italy, despite falling wages, because productivity is falling.

What will Bersani do?  Well, one good thing is that Monti has been fatally weakened.  So an outright pro-market deregulating, privatising government is now ruled out.  The left within the Democrats are stronger and may well ensure that austerity does not get worse.  But then even the IMF is opposed to any more austerity measures right now.  But the PD has no different policies from Monti really.  Bersani has not even gone as far as Hollande did in the French elections in talking about reducing inequalities or protecting jobs.  But he will do as Hollande has done; backtrack on all his promises to the labour movement in order to meet obligations to the Euro leaders.  Italy will stay where it is, in a depression, with real incomes falling yet further – real average earnings are now 2% below where they were in 2004!

Already there is talk of holding another election in order to force the voters to elect a stable pro-capitalist government, as happened in Greece last summer.  So the three Bs could be pitched against each other again within months.