In this blog on economics and economic issues from a Marxist viewpoint, I seem to have become obsessed by two things in particular: measuring the rate of profit and criticising Keynesian economics.  I don’t think these are bad obsessions because I maintain that the level and trajectory of the rate of profit on advanced capital in a capitalist economy is the best underlying guide to the health of that economy.  And also, it is essential for us to understand the theories and arguments of John Maynard Keynes and his followers in order to see that even the most radical approach to the ‘economic problem’ (as Keynes called it) won’t work to resolve the contradictions in the capitalist mode of production.

But anyway, let me return to the first obsession of mine once again. We now have the latest data for the US up to 2011 in order to measure the rate of profit a la Marx (to use the term of Gerard Dumenil and Dominique Levy, the French Marxist economists).  The US Bureau of Economic Analysis recently released updated figures on net fixed assets.  This provides the missing part in measuring the profitability of capital in the US for 2011 from a Marxist viewpoint.

How do we measure the rate of profit?  Well, there are a host of ways, most of which I have discussed in lots of previous posts (and more at length in one of my papers, (The profit cycle and economic recession).  But I still like to use Marx’s basic formula for the rate of profit i.e. total surplus value divided by the stock of advanced capital (constant (means of production) and variable (labour).    My favourite measure is to take the annual net domestic product of any economy (that’s gross domestic product less depreciation) less employee compensation (wages and benefits paid by the employers) to get surplus value.  Then I divide that by a measure of the cost of employing the labour force (employee compensation again) plus constant capital (which can be measured by the stock of fixed assets owned by the capitalist sector after allowing for depreciation).  There are lots of other ways: just looking at the corporate sector, for example, before and after tax and so on.  But my ‘whole economy’ measure is the simplest, takes into account all sectors in the economy, and is the easiest for comparisons between countries or in measuring a ‘world rate of profit’ (see my paper on this roberts_michael-a_world_rate_of_profit.).

One vexing issue is whether to measure net fixed assets in historic or current cost terms.  Marx measured profitability more or less like capitalists, namely you start with a stack of money (M) to invest in employing labour and machinery (C) and, thanks to the power of labour in production (P), the value of those commodities rises above the original investment (C’) and is realised in sales for more money (M’).  So the initial advance of capital is given in money and is not altered by the production process, even if the value of the commodities may alter during and by the end of the process (see my post, https://thenextrecession.wordpress.com/2012/02/21/trying-to-understand-the-difference/).

That means you should measure the stock of fixed assets in historic terms and not in current cost terms, which revises (nonsensically) the value of the original advance in current costs.  This conclusion comes from what is called the Temporal Single System Interpretation (TSSI) of Marx’s accumulation and profitability law.   The TSSI is not supported by the bulk of Marxist economists who reckon that measuring fixed assets in current costs is either correct or better (there is an endless amount of papers and debate on this question including on this blog – see https://thenextrecession.wordpress.com/2011/07/29/measuring-the-rate-of-profit-and-profit-cycles/).   So most of the measures of profitability are on a current cost basis.

But does it make a lot of difference?  Well, I reckon that it does not make that much difference in the outcomes.  And so does a recent paper by Deepankur Basu (Basu on RC versus HC) in which he looks at the two different measures of the net stock of capital for the US economy and finds that both generate pretty similar trends over the long term “making the choice irrelevant for the empirical analysis of profitability trends”.  I know this is disputed, but Basu’s conclusion is really a concession to the historic cost measure in admitting that it is just as good as the current cost one used by most Marxist economists in measuring the rate of profit.

In my measures I use the historic cost measure because I think it is closest to Marx’s view and so theoretically more correct.  And as the figure below shows, it removes much of the exaggeration and volatility in the rate of profit exhibited by the current cost measure, which is prone to the distorting effect of inflation or deflation in the price of capital goods.   But, as you can see, whichever of the two cost measures you use, the trends in the rate of profit in the US are the same.

There is another issue of measurement.  Many Marxist economists exclude variable capital from the denominator for the rate of profit because employee compensation is turned over much quicker than in one year, so the size of variable capital in the equation is much more difficult to calculate.  Well, I did some variations on this: making a plausible estimate of the turnover of variable capital, excluding altogether, or keeping it all in.  The results for profitability are much the same.   For more on the issue of the turnover of variable and circulating capital in measuring the rate of profit, see Peter Jones’ recent excellent paper (Jones_Peter-Depreciation,_Devaluation_and_the_Rate_of_Profit_final). 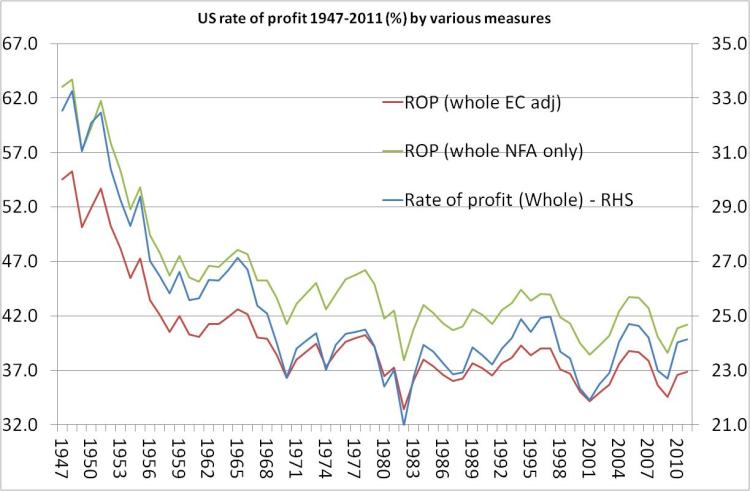 Phew!  That’s got some of the most important measurement issues sorted.  So what do the results tell us?  First and foremost, the US rate of profit shows a secular downtrend from 1947 right up to 2011.  And second, the latest data continue to confirm my own view of the movements of the US rate of profit that I first expressed in my book, The Great Recession, namely that we can discern a profit cycle in the US, at least since the war.  From 1947-65, there was high profitability, which although falling in the 1950s, stabilised through the mid-1960s.

Then we entered a downphase in profitability, a period of crisis, eventually to hit a low in the deep recession of the early 1980s.  After that, profitability rose, not back to the level of the 1960s, but still up significantly.  This was the so-called neo-liberal era.  However profitability peaked in 1997 and I reckon that it is now in another downphase that is not yet over.  In that sense, the neo-liberal era came to an end in the late 1990s, although there was another burst in profitability in the early 2000s, driven by the credit boom.

The graph below shows that the share of surplus value in total surplus value held by this sector has declined, especially in the neo-liberal period.  So, over the long term, the available profits for investment in the productive sector of the economy are being restricted.

In a period when the share of financial sector profits rose at the expense of profit in the non-financial sector, you might expect that to affect growth in new investment.  And the data show just that.  As the share of financial profit rose from under 15% of all profits in the early 1980s to  nearly double that by the end of the century, the rate of growth in net investment (after depreciation) plummeted.

So what is happening in the latest downphase in US profitability?  Well, so far the fall in the rate of profit from the peak in 1997 has not been as great as in the last downphase between 1965-82.  Over those 17 years, US profitability dropped by 23%.  So far from 1997, after 14 years, the  drop has been just 3% (see graph below).  Now if I am right about my argument that there are discernible phases and cycles in profitability, then the US rate of profit must have further to fall before this downphase is over and it’s got to happen over the next three years or so.

The rate of profit has not fallen as much as in the previous downphase because this time we have had a very sharp rise in the rate of surplus value.  Under Marx’s law of profitability, a rising rate of surplus value is the most important counteracting factor to Marx’s law ‘ as such’, which is that there will be a tendency for the rate of profit to fall because there is an inherent rise in the organic composition of capital.  This measures the value of constant capital (means of production) to variable capital (labour power).

Marx expected this ratio to rise over time as capitalists ploughed more capital into technology to raise the productivity of labour.  However, as only labour power can create new value (not machinery and raw materials), and the value of labour power begins to lag the value of constant capital, the rate of profit will tend to fall.

As the graph below shows, when the organic composition of capital fell, as in the neo-liberal period, due to the slump in the early 1980s and then from the cheapening effects of new technology in the 1990s, the rate of profit rose.  But in the 2000s, those cheapening effects have worn off and organic ratio has risen back to levels not seen since the crisis period of the 1970s.  But this time, the rate of profit has not fallen as much because the rate of exploitation (surplus value) has also risen, unlike in the 1970s.

The rise in exploitation and growing inequality (well recorded by many and in this blog) may lead to social upheavals down the road, but it does help to keep the rate of profit up.  But there are limits on increasing the rate of exploitation and the US economy has probably reached them, especially with productivity growth slowing and real GDP growth so weak.  So the current rate of profit can only be sustained by a sharp fall in the organic composition of capital.  That can only happen if there is large depreciation of the value of the means of production (and in fictitious capital, as I have discussed in previous posts).  And that means another slump or recession, perhaps equivalent to 1980-2.

Indeed, after making some reasonable assumptions about the data for 2012, I reckon the Marxist rate of profit fell in 2012 back to levels of the early 2000s – but we’ll see.  A crucial indicator that another slump is in offing is the mass (not the rate) of profit.  Every time the mass of profit has fallen absolutely in the productive sector of the economy, it has been followed within a year or two by a slump in investment and production (the red boxes in the graph below).

We were not yet in negative territory in 2011.  But if you look at corporate net cash flow, fairly close to a Marxist measure of the mass of profit, there has been a downturn in the first two quarters of 2012.   So maybe the next recession is not too far away.

22 thoughts on “The US rate of the profit – the latest”