Was it necessary for America to go to war in order to establish a sustained recovery in its capitalist economy or did the New Deal and Keynesian-type policies of easy money (low interest rates) and fiscal stimulus (tax cuts and government spending) do the trick well before the war economy became dominant?

It is a key argument of Marxist economics (at least in my version!) that capitalist economies can only recover in a sustained way if average profitability for the productive sectors of the economy rises significantly.  And that would require the sufficient destruction in the value of ‘dead capital’ (past accumulation) that is no longer profitable to employ.

From that flows the argument that the Great Depression of the 1930s in the US economy lasted so long because profitability did not recover throughout that decade.  I checked the data from the US Bureau of Economic Analysis for the period.  To get the rate of profit, I measured corporate profits against net fixed assets in the corporate sector, valued on a historic cost basis.  The evidence is clear (see graph): in 1938, the US corporate rate of profit was still less than half the rate of 1929. 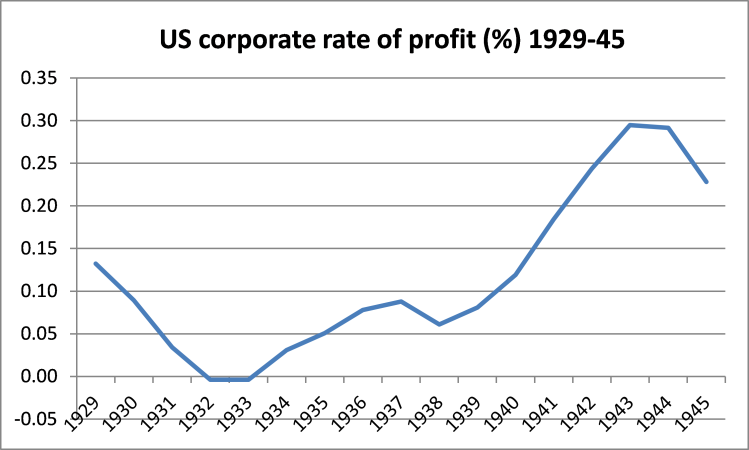 It was the same story for the mass of corporate profits too.  Even by 1940, profits were still below that of 1929.

Indeed, it is clear from these graphs that profitability only picked up once the war economy was under way, by 1940 onwards.

But maybe profitability in the capitalist sector is irrelevant to economic recovery and what matters is monetary and fiscal stimulation of effective demand (i.e investment and consumption).  That would be the Keynesian explanation of the depression: namely that there was a ‘liquidity trap’ that had to be released by ‘easy money’ policies and fiscal spending to stimulate the private sector; a ‘magneto problem’, as Keynes called it.  Arch-Keynesian economists Brad de Long and Larry Summers wrote a piece way back in 1998 entitled Does macroeconomic policy affect output?, Brookings Papers on Economic Activity (1988:2), pp. 433-80.  In their paper, they argued that US economic recovery was already well under way by 1942 when the US entered the world war.  De Long and Summers calculated that more than five-sixths of the decline in output relative to trend that occurred during the Depression had been made up before 1942. They found it “hard to attribute any of the pre-1942 catch-up to the war.”   So the Marxist account that it was war that transformed US capitalism and got it out of the Great Depression is wrong.

However, their estimates have been contested by Professor John Vernon. Vernon agreed that the US economy completed its recovery from the Great Depression in 1942, restoring full-employment output in that year after 12 years of below-full employment performance. However, Keynesian-type fiscal policies were not the most important factor from 1933 through 1940.  Only after that did they become the most important factor, when the recovery was less than half-complete. So it was World War II fiscal policies that were instrumental in the overall restoration of full-employment performance (see Vernon’s World War II Fiscal Policies and the End of the Great Depression, Journal of Economic History, 1994).  Vernon shows that more than 80% of the 1941 increase in real GNP can be attributed to World War II-associated federal fiscal policies. “Thus World War II fiscal policies did much more than simply complete a recovery already largely accomplished: they were, for more than half the recovery, the major determinant in the restoration of full-employment performance.”

If US economic recovery from the Great Depression did not start until the world war was well under way, then it lends support to the view that Keynesian-type monetary or fiscal policy won’t work and the Marxist view that capital values must be destroyed to restore profitability to get capitalist economic recovery.  And remember, the destruction of capital values means the bankruptcy of many companies, a huge rise in unemployment and even the physical destruction of things and people in their millions.

I had a new look at the evidence starting with GDP, the main indicator used by De Long and Summers.  By 1938, the level of US real GDP was still below the level of 1929.  There was no significant rise in US real GDP until 1940, after which GDP really took off to reach double the 1929 level by 1944.

And if we look at the key Keynesian categories of consumption and investment, we find that US investment levels again did not take off until 1941 and, most interestingly, consumption continued to fall, dramatically once the war began.

So there is no evidence of recovery before the war ‘kicked in’.  Investment took off from 1941 onwards to reach, as a share of GDP, way more than double the level that investment stood at in 1940.  Why was that?  Well, it was not the result of a pick-up in private sector investment.  What happened was a massive rise in government investment and spending.  In 1940, private sector investment was still below the level of 1929 and actually fell further during the war.  The state sector took over nearly all investment, as resources (value) were diverted to the production of arms and other security measures in a war economy.

But is not increased government investment and consumption a form of Keynesian stimulus, but just at a higher level?  Well, no.  The difference is revealed in the continued collapse of consumption.  The war economy was paid for by restricting the opportunities for workers to spend their incomes from their war-time jobs.  There was forced saving through the purchase of war bonds, rationing and increased taxation to pay for the war.  Government investment meant the direction and planning of production by government decree.  The war economy did not stimulate the private sector, it replaced the ‘free market’ and capitalist investment for profit.  Consumption did not restore economic growth as Keynesians (and those who see the cause of crisis in under-consumption) should expect; instead it was investment in mainly weapons of mass destruction.

The war decisively ended the depression.  American industry was revitalized by the war and many sectors were oriented to defence production (for example, aerospace and electronics) or completely dependent on it (atomic energy). The war’s rapid scientific and technological changes continued and intensified trends begun during the Great Depression. As the war severely damaged every major economy in the world except for the US, American capitalism gained economic and political hegemony after 1945.

In many industries, company executives resisted converting to military production because they did not want to lose consumer market share to competitors who did not convert. Conversion thus became a goal pursued by public officials and labor leaders. Auto companies only fully converted to war production in 1942 and only began substantially contributing to aircraft production in 1943.  Pearl Harbor was an enormous spur to conversion.  From the beginning of preparedness in 1939 through the peak of war production in 1944, the war economy could not be left to the capitalist sector to deliver.  To organize the war economy and to ensure that it produced the goods needed for war, the federal government spawned an array of mobilization agencies which not only often purchased goods but closely directed those goods’ manufacture and heavily influenced the operation of private companies and whole industries.

The military services were largely able to curtail production destined for civilians (e.g., automobiles or many non-essential foods) and even for war-related but non-military purposes (e.g., textiles and clothing). And the Department of the Treasury introduced the first general income tax in American history and “war bonds” sold to the public. Beginning in 1940, the government extended the income tax to virtually all Americans and collected it by deductions from wages at source.  Those subject to income tax rose from 4 million in 1939 to 43 million in 1945!

With such a large pool of taxpayers, the American government took in $45 billion in 1945, an enormous increase over the $8.7 billion collected in 1941, although still far short of the $83 billion spent on the war in 1945. Over that same period, federal tax revenue grew from about 8 percent of GDP to more than 20 percent.  All told, taxes provided about $136.8 billion of the war’s total cost of $304 billion. To cover the other $167.2 billion, the Treasury Department also expanded its bond program, which served as a valuable source of revenue for the federal government.  By the time war-bond sales ended in 1946, 85m Americans had purchased more than $185 billion worth of the securities, often through automatic deductions from their paychecks.

The Office of Price Administration attempted to curtail inflation by maintaining prices at their March 1942 levels.  And the National War Labor Board limited wartime wage increases to about 15%.  Although wages rose about 65% over the course of the war, the national living standard barely stayed level or even declined.  About 10.5 million Americans who either could not then have had jobs (the 3.25 million youths who came of age after Pearl Harbor) or who would not have then sought employment (3.5 million women, for instance). Almost 19 million American women (including millions of black women) were working outside the home by 1945.  Labour mobility was huge.  About 15 million civilian Americans moved. Migration was especially strong along rural-urban axes, especially to war-production centers around the country, permanently altering their demographics and economies.

As Guiglelmo Carchedi summed it in a recent piece (Behind and beyond the crisis, International Socialism, no 132, October 2011  http://isj.org.uk/index.php4?id=761&issue=132): “Why did the war bring about such a jump in profitability in the 1940‐5  period?  The denominator of the rate not only did not rise, but dropped because the physical depreciation of the means of production was greater than new investments. At the same time, unemployment practically disappeared. Decreasing unemployment made higher wages possible.  But higher wages did not dent profitability. In fact, the conversion of civilian into military industries reduced the supply of civilian goods. Higher wages and the limited production of consumer goods meant that labour’s purchasing power had to be greatly compressed in order to avoid inflation. This was achieved by instituting the first general income tax, discouraging consumer spending (consumer credit was prohibited) and stimulating consumer saving, principally through investment in war bonds. Consequently, labour was forced to postpone the expenditure of a sizeable portion of wages.  At the same time labour’s rate of exploitation increased.  In essence, the war effort was a labour‐financed massive production of means of destruction.”

I am not suggesting from this that the current Long Depression will only end with a new world war at the expense of millions of lives and destruction of material wealth.  But what the story of the Great Depression and the war shows is that, once capitalism is in the depth of a long depression, there must be a grinding and deep destruction of all that capitalism had accumulated in previous decades before a new era of expansion becomes possible.  There is no policy that can avoid that and preserve the capitalist sector.

Let Keynes sum it up “It is, it seems, politically impossible for a capitalistic democracy to organize expenditure on the scale necessary to make the grand experiments which would prove my case — except in war conditions,” from The New Republic (quoted from P. Renshaw, Journal of Contemporary History  1999 vol. 34 (3) p. 377 -364).

19 thoughts on “The Great Depression and the war”