Despite the intensifying debt crisis in the Eurozone and a battery of weak economic data for the major capitalist economies, the world’s stock markets have risen over the last two months, although the indexes are still well below where they were at the beginning of 2012, when optimism for economic recovery had risen again.

But stock markets are up this summer not because economies are beginning to expand faster – on the contrary.  They are up because the central banks of the major economies are hinting that they will launch yet another round of ‘monetary easing’, namely cuts in interest rates and the injection of money by the purchase of government and corporate bonds, through what is called quantitative easing (QE).  Every time in the past that the Federal Reserve has announced a bout of QE, or the Bank of England and the Bank of Japan have done the same, stock markets have jumped and so have bond prices.  Last December, the ECB launched its own version of QE with what it called long-term repo operations (i.e. lending money to banks for up to three years).

The Eurozone debt crisis has intensified this summer with the new Greek government clearly unable to meet its obligations and fiscal targets to the Troika, while Spain has been forced to borrow €100bn from EU funds to save its banks.  So now, Mario Draghi, the head of the ECB, has announced that the Eurozone central bank would find some way to fund Spain and Italy’s debt commitments to Europe’s banks, hedge funds and pension funds, the main holders of Spanish and Italian government debt.  These private sector holders had reached the point where they were no longer willing to buy this sovereign debt, or at least would only do so at extreme interest rates that could not be serviced by government’s without even more fiscal austerity.

The details of Draghi’s plan remains on the drawing board, but it does look as though the ECB will now fund Eurozone governments if they request it from the Euro leaders and are prepared to accept more austerity.  The ECB will now do so by ‘printing money’ and buying government bonds outright rather making loans.  The German Bundesbank is opposed to this plan but looks like being overruled by the rest of the ECB in order to avoid Italy and Spain going bust and the euro collapsing.

This is what the orthodox Keynesian economists have been demanding for some time.  Paul Krugman has been railing at the failure of the ECB and the Fed not to act to boost the flow of money into the economy.  In the UK, the former chief economist of Goldman Sachs and a multi-millonaire supporter of the old New Labour government, Gavyn Davies, took this theme up in his column in the FT (http://blogs.ft.com/gavyndavies/2012/07/29/lessons-from-the-feds-mistake-of-1932/#axzz22Zwx2A1t).

In a piece referring to the actions of the Federal Reserve in the 1930s, Davies reminded readers that the current Fed chairman Ben Bernanke thought that the main lesson from the Great Depression was the failure of the US central bank to stick to an ‘easy money’ policy.  If the Fed had done so, the Great Depression would have ended much earlier.  Bernanke took his conclusion from the work of his mentor, Milton Friedman who, along with Anna Schwartz, accumulated a colossal empirical analysis that sought to show that the Fed injected ‘too much money’ in the 1920s causing a credit bubble and then ‘cut back too much’ in the ensuing slump, causing a depression.

So if only a central bank could just get it right, booms and slumps could be tempered is the implication of Davies’ piece.  Davies argues that “The Friedman/Schwartz conclusion is that monetary policy from 1929-33 was “inept”, and was based on faulty economic reasoning by the Fed. In particular, I interpret them as saying that the Fed should have adopted larger open market operations – quantitative easing in today’s language – to expand the monetary base more rapidly than actually occurred”.  Davies makes much of the very short period when the Fed did engage in QE in a big way from February to July 1930, when it feared the collapse of the banks, just as the Fed did in 2008-9 and the ECB plans now.  The Fed bought government bonds just as the Fed did in 2009 with QE1 and 2011 with QE2.  But in 1930, the Fed quickly abandoned this programme.  What a mistake, says Davies.  In 1932, they “missed the point that a massive rise in the private sector’s precautionary demand for liquidity needed to be accommodated via an increase in the central bank balance sheet.”  So the answer to the failure of the private sector to spend money is for the central banks to print it.

But can huge injections of money by central banks kick-start the capitalist economy?  This could only be true if the capitalist economy was in a slump due to a lack of credit.  Yes, the banks and governments are squeezed for credit and injecting new credit may save them from collapse.  But the productive sectors of the economy are not.  The large US and UK corporations are flush with cash (see The UK’s weak recovery and profitability, 1 May 2012).  Banks are not lending to them as they do not need to borrow.  Ironically, in contrast, banks are not lending to households and small businesses because they don’t have any cash!

So this influx of credit may keep financial asset prices (stocks and bonds) up, but for the productive economy, it is just ‘pushing on a string’.  That’s because money supply is demand-led and artificially pumping in more credit into the banks and the stock market has little or no impact on the productive sectors of the economy (see my post, Effective demand, liquidity traps and deflation, 27 April 2012).  This is confirmed by the data on bank lending growth.  There is no loan growth in the UK and the Eurozone economies, which are in recession, in contrast to the US, which is growing, if weakly.

As investment economist, David Rosenburg pointed out in a recent piece in the FT (http://www.ft.com/cms/s/0/e74871c0-d283-11e1-abe7-00144feabdc0.html#axzz22ZxHuwjF), after almost four years of $1tn-plus fiscal deficits, near-zero policy rates and a Fed balance sheet that has reached 20% of GDP, the US economy has expanded at barely more than a 2% pace – the weakest recovery ever.

Last week’s data on economic activity in the productive sectors of the major economies reveals further slowdown for the US and China and a slip into recession for the UK and the Eurozone.  Indeed, as measured by the latest purchasing managers survey indexes, the world economy as a whole appears to be contracting.

The very latest data on US job growth at first sight seemed a little more encouraging, with employment up 163,000 in July, at least according to the payroll data (compiled from company payrolls).  However, the household survey (which is a sample measure from all sectors) found that the total number of employed people actually fell by 195,000.  Indeed, the unemployment rate rose from 8.1% in June to 8.3%.  Average monthly jobs growth this year is just above 150,000, which is the same as it was for all of last year. But the average for the last three months (including this morning’s revisions) is only 105,000.

A perceptive summary of the state of the US economy and its pace of recovery has come from John Taylor, the mainstream orthodox economist and expert on the actions of the Federal Reserve that Gavyn Davies and Paul Krugman are so keen on getting to do something (http://johnbtaylorsblog.blogspot.co.uk/2012/08/its-still-recovery-in-name-only-real.html).  Taylor put it starkly: “I have been regularly charting the path of real GDP and employment during the recovery from the recession as new data are released. From the start it was clear that the recovery was very weak. By its second anniversary the recovery was weak for long enough to call it ‘a recovery in name only, so weak as to be nonexistent.’ Now we are just past the third anniversary, and it is still at best a recovery in name only. It’s now the worst in American history—a tragedy that should not be minimalized.”

Taylor points out, as I have done in previous posts (see The long depression and the waste of capitalism, 3 may 2012), that the gap between real GDP and potential GDP is not closing at all. That is the main reason why unemployment remains so high.

In his second chart, Taylor shows that the failure to close the gap contrasts even with the previous deep recession in the early 1980s. In that slump, the gap eventually closes.

Even the terrible slump at the end of the Long Depression of the 1880s and 1890s in the US saw a recovery. 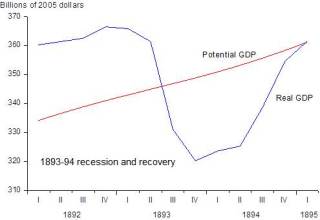 Finally, Taylor points out the extraordinarily weak employment record in this recovery. The employment-to-population ratio is still lower than at the start of the so-called recovery.

The data confirm that we are in a Long Depression.  It also confirms that the policy responses of the Fed and other central banks have been ineffective.  Despite the hopes of the likes of Krugman and Davies, the central banks can do nothing, except prop up the banks and promote a temporary stock market boom.  That is because this depression is not the consequence of either ‘too much credit’ or ‘too little credit’.  There are deeper flaws to be found in the productive sector of the capitalist economy – as this blog has tried to reveal on many occasions.

2 thoughts on “QE, the euro and the monetary option”