The UK’s data are not too bad and we can make a stab at coming up with an account of the movement in the UK rate of profit.   I did this in my book, The Great Recession.  But I have revisited the data.  To measure the rate of profit a la Marx, to use Gerard Dumenil’s phrase, I took the net operating surplus on the UK’s non-financial corporations (if you like, that’s profit after deducting for consumption of fixed capital) and divided it by the net stock of fixed assets.  The UK statistics measure net fixed assets in current or replacement cost terms.  As you know, if you read this blog regularly, this is controversial in Marxist economic circles, as valuing fixed assets at current costs does not really provide an accurate rate of profit (indeed Andrew Kliman would argue that it is not a rate of profit in any meaningful sense – see my post, Andrew Kliman and the failure of capitalist production, 8 December 2011).   So I have attempted to adjust the current cost measure to an historic cost measure by using the equivalent ratio of depreciation between the two measures as used in the US data.  This is the best I can do to deliver a rate of profit measure based on historic costs.

The data for all this are only available in the UK going back to 1987.  What they show is that there has been an upward trend in the UK rate of profit for non-financial corporations over the period 1987-09.  The rate of profit on both measures peaked in 2007 and then fell by 25-30% through to 2009 to reach levels not seen since the big UK slump of 1990-1. 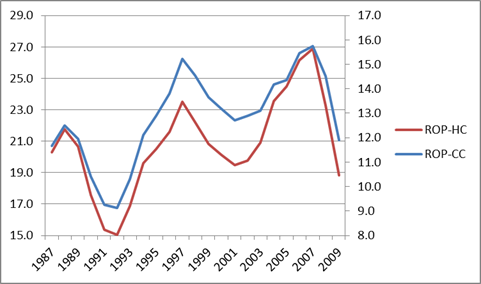 There are data that go back further to 1950, but they rely on gross operating surpluses not net figures.  But if we use these to get an idea of what was happening to the UK rate of profit in the whole post second world war period, we find the same trends, whether measured in current cost or historic cost terms.  The overall period from 1950 to 2009 shows a downward trend in the UK rate of profit.  But that is because the rate of profit was so high in the early 1950s and declined thereafter to reach a low in the first great post-war capitalist slump of 1974-5.  That seems to have been a turning point.  UK manufacturing industry was decimated and the process of transforming the UK capitalist economy fully into services-based sectors began in earnest.  This led to a gradual improvement in the rate of profit, although the rate did not get back to the levels of early 1960s (except, on some measures, in the recent credit-fuelled boom of the early 2000s).   Also, from about the mid-1980s, the rate of profit on an historic cost basis trended pretty much flat (the green line in the graphic below).

What of the rates of profit in the other major capitalist economies?  This is not easy to calculate as the data are so mixed.  But we can get some idea of trends by using the European Commission AMECO database, something used by other Marxist economists.  Using that database and making various assumptions (most significantly measuring the rate of profit in real terms), we find that all the major capitalist economies still have rates of profit below that of 2007 and some still significantly lower (France and Italy).  Nevertheless, there has been a recovery in the rate of profit since 2009.

The AMECO database is not comparable with data from national accounts, but it shows the trend  in the rate of profit since 2009 and also in the mass of profit since then.  Only in the US did the mass of corporate profit surpass the previous peak of 2007 by the end of 2011.

The overall conclusion we can make from these data is that profitability has recovered from the trough of 2009 in the major capitalist economies, but remains below the last peak of 2007.  That suggests that capitalist investment will rise from  the depths of 2009 (and it has done) but investment (and thus real GDP growth) is likely to be lower than even the relatively poor growth rates after the mild global recession of 2001.  Capitalism in the major economies remains in a relatively weak state.

One thought on “The UK rate of profit and others”