At a plenary session of the Historical Materialism conference in London last weekend, there was a debate on what strategy the left should adopt in the Eurozone economic crisis.  Under the auspices of the Socialist Register publication, the speakers were Michel Husson, the well-known French Marxist economist (hussonet.free.fr); Costas Lapavitsas, the Greek socialist economics professor at London’s School of Oriental and African Studies (SOAS); and Ozlem Onaran from Middlesex University (see her excellent article on the Eurozone mess, Fiscal crisis in Europe or a crisis of distribution?, Political Economy Research Institute
http://www.peri.umass.edu/236/hash/91ee67bea2d8f4b261cd1c80cfc69d70/publication/412/).

As Onaran put it, there was significant agreement on many issues. First, fiscal austerity should be opposed.  The fiscal austerity packages demanded by the dreaded Troika of the ECB, the EU Commission and the IMF on all the European states were designed to ensure that the bankers got paid in full and were destroying the living standards of the 99% in the process.  More important, they would fail in restoring economic growth and employment.  On the contrary, they were ensuring that the Great Recession would become a depression.   Second, Greece should not honour the repayment of the public sector debts run up with Europe’s banks, insurance companies and hedge funds because it is crippling the country’s ability to get out of a deep economic slump and lowering economic growth and living standards for a generation.  Default on these debts would inevitably bust many banks, especially the Greek ones.  So they should be nationalised without compensation to shareholders and bondholders and then recapitalised to provide credit to small businesses and households.  Third, government finances should be put on a proper footing through progressive income taxation, taxes on excessive wealth and unproductive financial transactions (and some cuts – Greek military spending per head is the highest in Europe). Along with transparent and rigorous collection of due taxes, this could provide the funding for a state-led investment programme for jobs and incomes directed towards labour and not profit.

But there was significant disagreement on the question of the euro, Europe’s single currency. Lapavitsas was charged emotionally in telling the audience that the first and most important thing the left had to campaign for before any of the above programme was to break with the euro.  The euro was at the heart of the problem.  It was a  ‘world money’,  not a currency for the people.  By this, I think he meant that it was an imperialist currency like the US dollar.   Capitalists conduct their transactions in dollars and euros.  They hold their reserves in these currencies.  For that reason, the euro’s value was controlled by big capital to the detriment of the likes of Greece, Portugal etc, the weak capitalist states of the Eurozone.  Because the euro was an invention of finance capital, we should have nothing to do with it.  If we did not recognise its pernicious role, we would fail to develop a proper anti-capitalist campaign in Europe.  Worse, we would continue to pander to some imaginary dream of ‘Europeanism’.  The EU and Eurozone did not represent a people’s Europe but a project invented and controlled by finance capital and big business in Europe and we should not give it any credence.  European institutions were capitalist from the beginning and could not be reformed.  The euro was heading for a break-up anyway and it was time the left made it clear that it did not want to be part of this failing project.

Both Onaran and Husson disagreed.  Husson made the tactical point that in France there is no move among the labour movement to leave the euro.  Putting that forward as the first and key demand would receive no echo in the labour movement.  He could have added that the same reaction would be felt in Portugal, Ireland, Spain or Italy, where the Troika packages are being imposed or may be imposed.  In Greece, while 60% of those asked in polls are against the austerity packages, 70% want to stay in the euro.

That’s the tactical argument.  Onaran made some key economic arguments against this policy.  I summarise some of them and add my own.  Leaving the euro and adopting a national (non-world) currency for the Greeks would be no solution on its own. Doing that would mean the New drachma would be devalued by at least 60% against the euro.  That might make Greek exports more competitive, but exports are only 30% of GDP.  Import prices would rocket in new drachma terms and very soon inflation would run through the Greek economy and start to cancel out the gain from devaluation.  History has shown that devaluing a currency to gain competitive advantage does not deliver for long.  Also, debts owed by corporations, banks and households in euros would double.  The government may default on its debts, but what could households do with their euro mortgages or businesses with loans from European banks?  Moreover, if all the ‘bailout’  Eurozone economies also left the euro (as advocated), they would devalue and we would enter a ‘beggar-my-neighbour’ race to get the lowest value currency to compete in Europe’s markets.  The gains from devaluation would disappear.  The break-up of the euro would mean the disruption of trade in Europe, probably taking the region into recession (it’s nearly there anyway).  A programme of default and state-led investment can be used to win over other states to the alternative of austerity and bailouts, but not if the major upfront demand of the left is to leave the euro.

Yes, the euro is a ‘world money’ concocted by imperialism.  But so is the dollar.  The euro is controlled by the Eurozone institutions which are dominated by Franco-German capital to the detriment of the weak capitalist states like Greece.  But is the answer to revert to weak capitalist currencies like the drachma, peseta or lira?   Since when has having the UK pound done much good for British households who suffer from higher inflation and interest rates, rising unemployment and economic growth no better than the strong euro economies, even though the UK has ‘escaped’ from the straitjacket of a ‘world money’ and can devalue when it wants?

Of course, if the Greek government were to default on its debt, nationalise its banks and introduce capital controls on the attempts of the rich to take their euros out, it may well be kicked out of the Eurozone anyway, but that is not the same as saying the first act of an anti-capitalist government must be to make a voluntary exit from the euro and call for everybody else to leave too.   Surely, the issues of investment, growth, economic control and living standards are where the left must direct their policy prescriptions, not towards emphasising nationalist beggar-thy-neighbour policies of devaluation?

A left government in Greece could also lay into the lies and myths about the Greek people as part of a Europe-wide campaign.  The usual lie quoted continually in the tabloid press in Germany and elsewhere in Europe is that Greek workers are lazy and unproductive.  But what is the evidence?  Greeks work more hours in a year than any other country in Europe – and more than even the Americans or Brits!  And surprisingly, it is the Germans who are the ‘laziest’!

Although Greek economy-wide productivity started from a low base when the country joined the Eurozone in 1999, growth in labour productivity since then has been faster than the strong capitalist economies of Germany or France- up 25% compared to  just 10% in Germany. 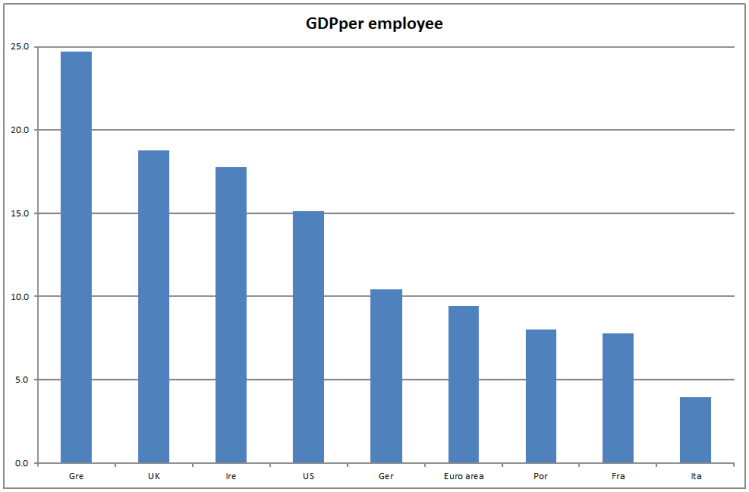 Greek competitiveness has improved since 1999, more than any other Eurozone state except Germany. 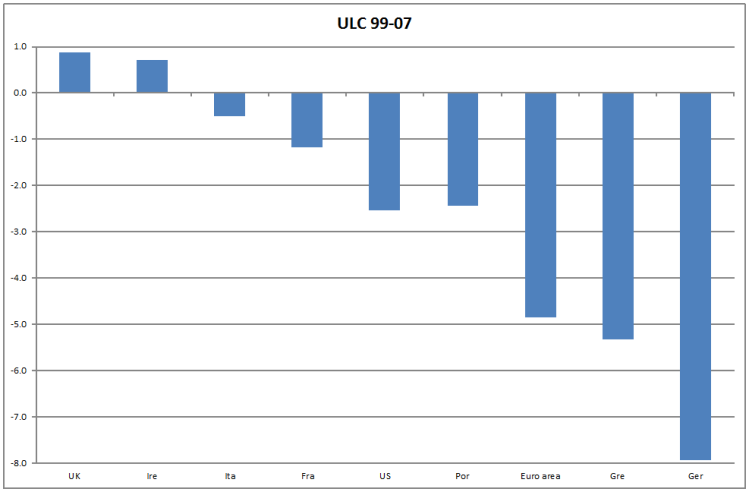 The reason Germany has been so competitive has not been because the growth in its productivity of labour was so good, but because wages have risen the least, just 22% since 1999 compared to nearly double in Ireland and up two-thirds in Greece. 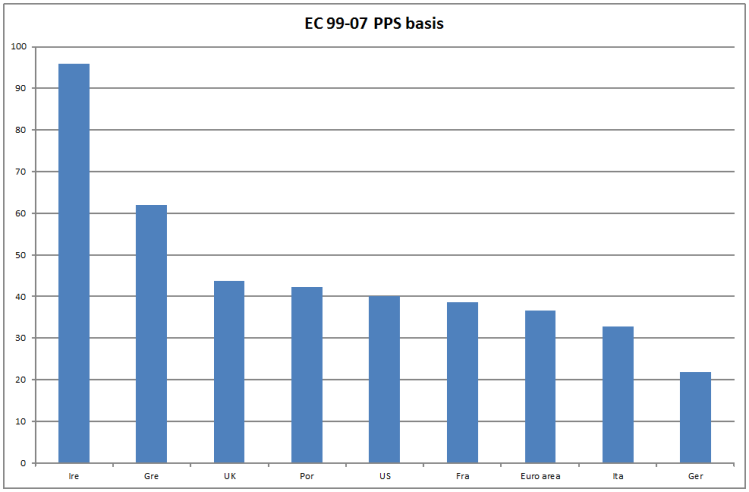 While Greeks saw their living standards improve under the euro, until the crisis came, they did this by working the longest hours and by being exploited productively more than any other workforce in Europe.  The biggest gainers from joining the euro were the Greek capitalists.  The fruits of increased economic growth and trade went to them disproportionately.  The wage share in Greek national income fell nearly 4% pts, a fall only surpassed by Spain and more even than American workers suffered relatively.

14 thoughts on “Europe: default or devaluation?”