As we end the calendar year and head into a new one, it’s time to review the prospects for the world capitalist economy.  Those prospects continue to depend on one key factor, the profitability of capital.  In my book, The Great Recession, and elsewhere, I have argued that the profitability of capital moves in a cycle of about 32-36 years, with an up phase of 16-18 years and a down phase of 16-18 years.  The evidence for this is in my book and in more recent stuff (The causes of the Great Recession, paper presented to the Association of Heterodox Economists Conference, July 2010).

This cyclical process in US profitability (the one that matters) has recently been commented on by Simon Mohun of Queen Mary College, London in a paper he presented to the November Historical Materialism conference (The present crisis in historical perspective).  In the attached paper, with Figures 7 and 8, Simon spells out his thesis “that US capitalism is characterised by long secular periods of falling profitability and long secular periods of rising profitability and crises are associated with major turning points”

For Simon, this is apparently work-in-progress.  But I’ve been more confident about the validity of this cyclical process for the past five years.  Simon’s turning points seem to be different from mine, but looking at his data suggests a closer correlation – namely a 1946 trough in profitability, a 1965 peak, a 1982 trough and a 1997 peak.  It is my prediction from the evidence of history that next low for US profitability will be around 2014-15.  So we are not there yet.  Indeed  – as I shall explain below – we are currently entering a short upturn in profits within the longer cyclical down phase that started in 1997.

But why 16-18 years of up and down?  Well, if you look at the data provided by the US Bureau of Economic Analysis, on which we all rely for our profitability figures, the aging structure of fixed assets (plant, equipment, technology) for the capitalist production sector of the economy seems to have an average life of about 16-18 years!  This seems to confirm Marx’s tentative explanation for the length of the cycles of capitalist production being dependent on a renewing of old capital, although he suggested the cycle was about ten years in length.  The cycle of up and down in profitability and the turning points relate to when capitalists (on average) need to renew capital stock in a big way in order to restore profitability.  See the chart below.

But what is happening to US profitability at the moment?  We are currently still in a down phase for profitability from the last peak in 1997.   From 1997, there was a fall to 2001, followed by a recovery (in the credit boom) up to 2005-6.  Contrary to most commentators, profitability did not continue to rise to a new peak at the start of the Great Recession in 2007-8.  Sure, measured by the ratio of US profits to GDP, it may have reached a new peak.  But that is not a Marxist definition of profitability, which is measured against fixed capital stock (as above).  On that Marxist measure, the peak of 1997 was not surpassed in 2005-6.  After that, profitability fell back to reach a new trough in 2009 during the depth of the Great Recession.

Since mid-2009, there has been another recovery in profitability as weaker capitalist companies have been bankrupted and others have written off large swathes of redundant and unprofitable assets.  This has laid the basis for a short-term recovery in profits that could last until 2012-13.  But these shorter-length profit cycles are really the product of the running down the stock of working capital (called the Kitchin cycle, named after that economist) and not a decisive ‘turning-point’ in profitability (as Mohun calls them).  If the 16-18 year cycle holds, then the current profitability will not last beyond 2013 or so and then we’ll enter a sharp downturn to reach a new trough by 2014-15.  That will instigate a new economic slump of probably depressing proportions as capitalists try to remove the last vestiges of dead capital still in the system that is holding back a sustainable up phase in profitability.

Interestingly, this prediction of 2014-15 for the next recession matches the evidence of the current length of cycles of boom and slump registered by the National Bureau of Economic Research.  The NBER reckons the cycle since 1945 has averaged 57 months, or pretty much equivalent to the Kitchin cycle.  With the last trough in mid-2009, that suggests the next one will be around early 2014.

I have argued before that the major developed capitalist economies are not going to slip back into an immediate recession, a double-dip (see my post, No double-dip, 29 October 2010).  But what is important about this current economy recovery is that it is very weak, much weaker than previous recoveries after 1974-5, 1980-2 or 1991.  Look at this graphic that shows the rate and amount of recovery in real GDP in the US after the point of the trough in the slump.  In the 1974-5 recession, it took eight quarters before the previous peak in national output was reached.  In the 1980-82 recession, the previous peak was reached within six quarters, although then there was a drop back in a ‘double-dip’.  In 1990-1 (not shown) the slump was pretty shallow and the previous peak was reached within five quarters.  But in the Great Recession, the previous peak in US national output has still not been reached after eleven quarters.

The reason for the relative weakness in the recovery is two-fold.  First, as explained above, the trough in the down phase in the US profitability cycle still has to be reached and the current recovery in profits is not strong enough to suggest a new up phase.  There is still too much dead capital in the system as the level of capacity utilisation in US industry reveals (see my post, Capacity utilisation and the rate of profit, 16 September 2010).

And that leads to the second reason.  The huge build-up of fictitious capital during the great credit boom of 2002-7 has left a mountain of debt both in the private sector and the public sector (as governments borrowed hugely to finance the bailout of the collapsing banking system).

Indeed, we can measure the downward pressure on profitability caused by the expansion of this fictitious capital over the last 60 years in the US.  The graphic below shows the movement of US corporate profits (measured as net operating surplus – NOS) against tangible fixed assets (plant and equipment – red line) and then against real and fictitious capital (debt) added together (green line).  Both lines exhibit the cyclical effect in profitability, but this is much more pronounced for the profitability of tangible fixed assets than for the wider measure of capital.  Indeed, the profit rates between the two measures widen significantly after 1982 as capitalism ploughed more resources into the financial sector and into financial speculation to try to restore profitability.  The gap reaches a peak from 1997 onwards during the great credit boom that went bust in 2007.  And now, while profitability for tangible assets improved slightly in 2009, it was still falling for the wider measure.  That shows the downward pressure on profitability from the mountain of financial debt still in the system. 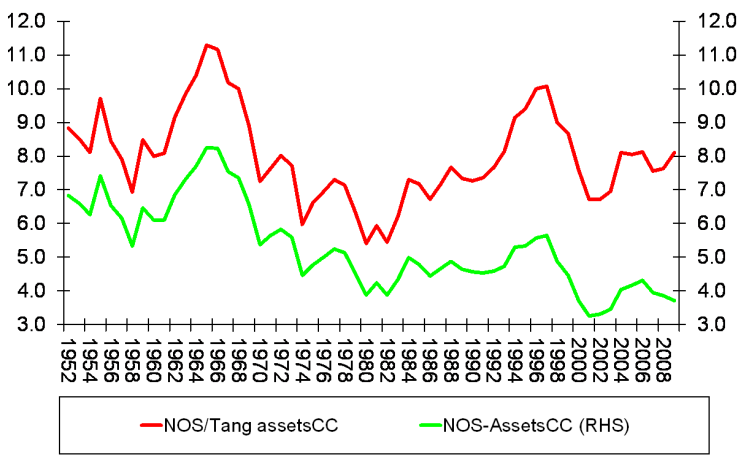 The writing-off of this money debt (called deleveraging) along with the writing down of the value of tangible fixed assets is going to take a long time.  Recent historical studies by McKinsey and Rogoff and Reinhart show that deleveraging can take between four and seven years to complete before capitalists are prepared to borrow funds again to invest or households are prepared to borrow more to buy ‘big ticket’ items like houses or cars.

There has been unprecedented deleveraging since the Great Recession began to bite.  The financial sector has sharply reduced its debts (by write-offs and bankruptcies).  In the household sector too, debts have been reduced in absolute terms and relative income for the first time since the Great Depression of the 1930s.  This deleveraging has been under way for about two years now.  But at the same time, leverage in the public sector has rocketed, putting an extra burden on the capitalist sector to finance the cost of this new debt in higher taxes and/or higher interest rates to borrow to invest.  And deleveraging through so-called ‘fiscal austerity’ programmes in Europe and the US has only just begun.

Until the level of debt in both the private and public sectors gets back to pre-credit boom levels, say where they were at the peak of the last profit up phase (1997), profitability will struggle to recover much and will eventually fall back again.  Completing the write-off of capital (both real and fictitious) is likely to take another economic slump – thus 2014-5 again.

5 thoughts on “The cycle of profitability and the next recession”